QB Heinicke re-signs with Washington for $8.75M over 2 years

Taylor Heinicke hoped an impressive performance in his playoff debut would keep him in the NFL. It did more than…
Listen now to WTOP News WTOP.com | Alexa | Google Home | WTOP App | 103.5 FM

Taylor Heinicke hoped an impressive performance in his playoff debut would keep him in the NFL.

It did more than that.

Heinicke re-signed with Washington on Wednesday, a two-year deal worth $8.75 million. The 27-year-old who was out of football and taking college classes online when he joined the practice squad as “quarantine quarterback” in December now has a full-time job and potentially a chance to compete for the starting role.

“I’ve never felt I had two feet in the door,” Heinicke said. “I’ve always felt that I’ve been fighting either trying to make practice squad or even make the (roster). It’s always been kind of one foot in, one foot out. Now I actually feel like there’s a little more security there. This is the first time I’ve felt that being in the league, so it’s a great feeling.”

Heinicke went toe to toe with Tom Brady in Washington’s wild-card round loss to the eventual Super Bowl-champion Buccaneers. He was 26 of 44 for 306 yards, a touchdown pass and an interception and rushing for a team-high 46 yards and a score.

Now he’ll be in Washington’s QB mix, which remains very much in flux. Coach Ron Rivera indicated Kyle Allen will be back but was noncommittal about Comeback Player of the Year Alex Smith being on the roster in 2021.

Washington could also trade for or sign a veteran to compete with Heinicke and Allen or use the No. 19 draft pick on a developmental prospect.

“We all saw how Taylor Heinicke played in the playoff game,” executive vice president of personnel and football Marty Hurney said. “First, you start with evaluating your roster. Then you look at the quarterbacks that are out there. A lot of times it’s all about timing in the draft, what position you’re in and who’s out there available.”

Going undrafted out of Old Dominion, Heinicke had stints with Minnesota, New England and Houston before landing with Rivera in Carolina in 2018. He made his first start with the Panthers that year and didn’t play again until relieving 2019 first-round pick Dwayne Haskins in Week 16 this season.

Heinicke went 12 of 19 for 137 yards and a touchdown in that game. His familiarity with offensive coordinator Scott Turner’s system gave the coaching staff confidence that Heinicke could play in the wild-card game with Smith nursing a right calf injury.

Heinicke separated his left shoulder against Tampa Bay diving for the pylon at the corner of the end zone and in the process earned respect from teammates for his gutsy play in the 31-23 loss.

“That dude plays with no fear, and he’s going to give his playmakers a chance to make plays,” receiver Terry McLaurin said. “He’s going to extend plays, run and take hits. He’s going to do everything you asked for a quarterback to do in this league.”

Heinicke’s knowledge of Turner’s offense might also help him in training camp and preseason moving forward.

“I think it gives me a leg up,” he said. “That’s a huge thing. I’ve been to a couple different teams, and learning a new offense is hard, especially if it’s virtual. I couldn’t imagine. Just getting on the field and doing reps just in walk-through helps a lot. I think that helps me a little bit. But again, once we do all get together and get on the field, that’s when it all happens.” 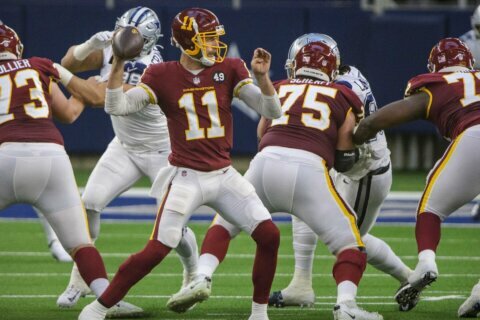 Washington is ‘expected’ to release Alex Smith in the near future, per report 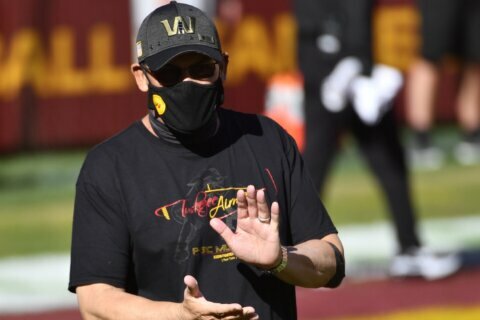