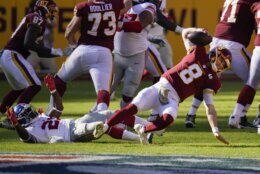 LANDOVER, Md. (AP) — Alex Smith paused his preparations to enter the game to watch starting quarterback Kyle Allen get carted off the field after dislocating his left ankle.

“Obviously, a ton of emotions going on for me right there,” Smith said. “I see them with the air cast and the cart. I know that routine well.”

Smith broke his right leg on the same field two years ago — a gruesome injury that needed 17 surgeries to repair. Relieving Allen in just his second NFL game since November 2018, Smith threw for 325 yards and a touchdown, but also tossed three costly interceptions that contributed to Washington’s 23-20 loss Sunday to the New York Giants.

“He gave us a chance to win,” wide receiver Terry McLaurin said.

Smith, 36, was 24 of 32 and led two second-half touchdown drives before getting intercepted twice in the final 2:18. Coach Ron Rivera immediately after said Smith will be the starter next week at Detroit and said 2019 first-round pick Dwayne Haskins would back up.

“I was very pleased,” Rivera said of Smith’s play. “It was exciting to watch him out there. It was unfortunate with the interceptions.”

Allen was the guy since Rivera benched Haskins four games into the season because the first-year coach thought the 24-year-old gave Washington a better chance to win while trying to compete in the weak NFC East. The injury when Allen’s left leg bent the wrong way on a sack by Jabrill Peppers ended his streak of starting, with an MRI scheduled to examine the extent of the severity.

“November is a lousy month for Washington QBs,” former Washington quarterback Joe Theismann tweeted. His career-ending injury happened 35 years ago this month and 33 years to the day before Smith went down.

Peppers was penalized for leg-whipping Allen but said he didn’t do it intentionally.

“I was just trying to play hard and get him on the ground,” Peppers said. “You never want to see a guy go down like that. I just pray for him. I apologized to him. I definitely didn’t mean for that to happen.”

Giants coach Joe Judge said he and his team expected the game plan to change when Smith entered, and it did. Smith mostly dinked and dunked the rest of the first half before opening things up to launch a comeback bid, connecting with McLaurin on a 68-yard pass that was his first TD in 748 days.

“It always feels good to throw a TD,” Smith said. “It had been a really long time.”

Smith felt much better than in his relief appearance last month against the Los Angeles Rams, when he was 9 of 17 for 37 yards and couldn’t get the offense going.

The interceptions — one late in the second half and then two in the final 2:18 — kept Washington from being a half-game behind first-place Philadelphia in the dreadful NFC East. But Smith hopes to be more prepared next week at the Lions with a full week of practice snaps as the starter. 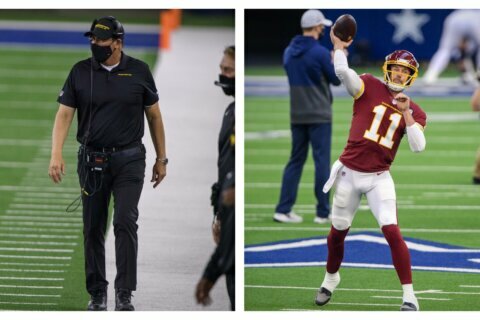 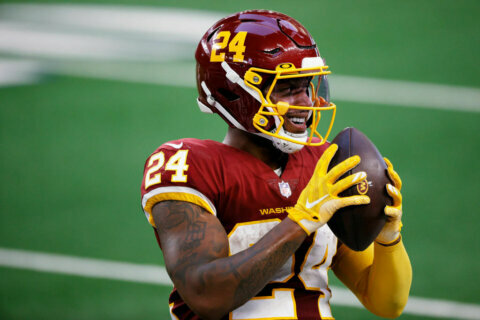 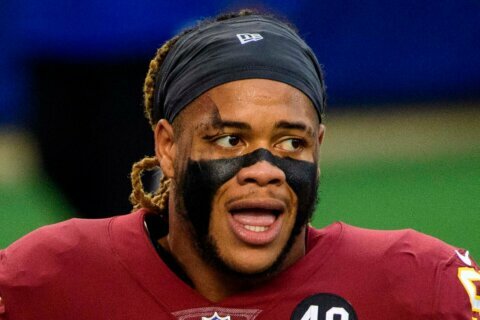 Sure watch the NFC East standings, but Washington needs to win 3 of 5