For all the QB talk, it's the defense that's sinking the Washington Football Team in a dreadful yet competitive NFC East.
Listen now to WTOP News WTOP.com | Alexa | Google Home | WTOP App | 103.5 FM

Kyle Allen will start at quarterback Sunday for Washington at the New York Giants if he’s healthy.

That’s all well and good, but it doesn’t matter who’s under center if the defense doesn’t get its act together — and quick.

Washington’s defense has allowed 30 points or more in four consecutive games, all losses, to drop the team to 1-4. The unit continued to give up big plays and third-down conversions in a blowout defeat to the Los Angeles Rams, and for all the QB talk, it’s the defense that’s sinking coach Ron Rivera’s team in a dreadful yet competitive NFC East.

Where to start? Los Angeles converted four of six third downs in the first half, when the game was still in reach, and scored on a 56-yard throw and catch from Jared Goff to Robert Woods.

Rivera after reviewing the film thought veteran safety Landon Collins took a bad angle on the touchdown. But that’s just one thing he’s seeing go wrong on a defense that keeps missing tackles and assignments at an alarming rate for its level of talent.

“Sometimes it looks like we’re not where we need to be,” Rivera said, referencing players not understanding what side to shift to when they’re getting help from a teammate. “That’s the frustrating part because I see that’s something that the coaches are working on, something that the players are practicing, but we’ve got to take what we’re being taught, what we’re doing and transfer that from the practice field to the game field and go out and execute.”

For a very short period of time — almost two quarters — the offense led by Allen moved the ball down the field and looked more together than it did with Dwayne Haskins running it. Allen was 9 of 13 for 74 yards passing and led a scoring drive he finished with a 7-yard touchdown run.

That’s why Allen is the guy if he’s good to go after a left arm injury that opened the door for Smith’s return. Asked if the offense was different with Allen, running back J.D. McKissic replied, “I’ll let you decide that.”

The offensive line is an inexperienced, uncoordinated mess. The result was eight sacks allowed — two of Allen and six of Smith, who hadn’t taken a hit since breaking his right tibia and fibula in November 2018.

Rivera blamed it largely on falling behind and being unable to establish the running game. But given the patchwork offensive line, it’s no wonder he was unwilling to put Allen back in the game after taking a big hit.

Chase Young is definitely back. After being sidelined one game with a groin injury, the No. 2 pick didn’t miss a beat against Los Angeles, making two tackles by blowing through would-be Rams blockers.

The defense has some tough sledding right now, but with Young and Alabama-produced defensive linemen Jonathan Allen and Daron Payne, there’s hope for the future.

It’s quite possible Haskins doesn’t play another game in a Washington uniform. The 2019 first-round pick was demoted to third on the depth chart, reported being sick and was sent home Sunday and will again be inactive against the Giants if Allen starts because Smith is set to back up.

Rivera expects Haskins “to continue to learn and grow.” Will he even get that chance with third-team snaps in practice and no game action?

“As we continue to get into this and we get further down the road, who knows what’s going to happen?” Rivera said.

693 — Days from Smith’s gruesome injury until his return Sunday, a remarkable accomplishment after undergoing 17 surgeries and surviving a life-threatening infection to play in another NFL game.

See if Allen is good to go for practice Wednesday and proceed from there. If he’s not, Smith could make his first start since Nov. 18, 2018, against the Giants who opened as 3 1/2-point favorites despite being 0-5. 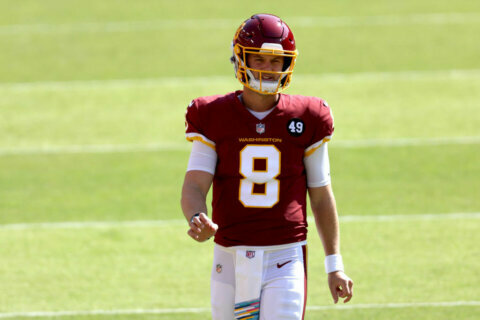 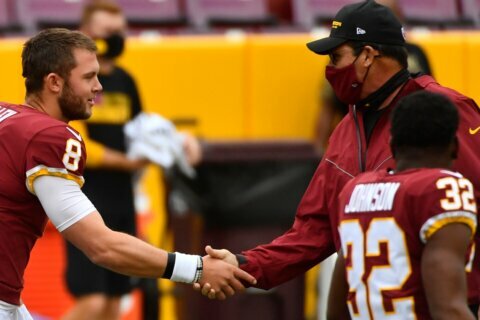 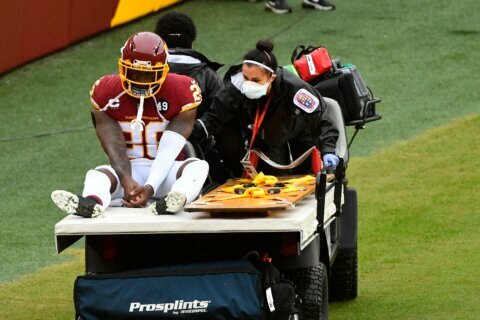