Haskins threw three interceptions and fumbled on a strip sack by Myles Garrett in a 34-20 loss on Sunday to the Cleveland Browns, who scored following four of Washington’s five turnovers.

Haskins, who had been showing growth in his second season for the Washington Football Team, reverted to some bad habits. He locked in on targets, forced throws into tight coverage and gave the Browns momentum with his miscues.

“No excuses for anything,” said the former Ohio State star, who went 21 of 37 for 224 yards. “I’m going to make sure I keep motivating and pushing these guys, and not only that, motivate and push myself to the potential we have.”

Haskins’ three interceptions were his most since his NFL debut last season, when he was sent into a game in September against the New York Giants.

“I just got done talking with Dwayne,” Rivera said. “I told him, look, I’m behind you. I’m going to stick with you, so you go out and play football. He has to understand you don’t have to make the big play all the time. Plus you’ve got guys who can make plays. You need to get the ball in their hands and let them go out and make plays.”

Rivera wants his young quarterback to put his head down and keep working. There are going to be fans demanding he be benched, but Haskins has to ignore those distractions.

Rivera experienced ups and downs with Cam Newton in Carolina, so this is nothing new.

“The outside noise is exactly what it is. It’s noise,” Rivera said. “The truth is, how’s he going to learn? Is he going to learn taking the scout team snaps? No. The only way we’re going to truly find out where Dwayne is and what he can do for us is to put him out on the field and get him exposed.”

“That’s what we did with Cam Newton. Look where he is today. Cam Newton was the league MVP because we trusted him, we took our lumps with him. I’m going to take my lumps with Dwayne right now. As long as he continues to do things that show you he can make things happen, I’m going to support the young man. I’m not going to pull the plug on him because something like this happens. He’s barely through a rookie year now in terms of learning and growing.”

Things started well for Haskins, who threw the first of two touchdown passes to Dontrelle Inman in the first quarter to put Washington ahead 7-0.

Haskins then drove Washington to Cleveland’s 26, and after a holding call and 5-yard loss, he overthrew a pass intended for tight end Logan Thomas and it was intercepted by Browns safety Karl Joseph, who returned it 49 yards.

Cleveland cashed in with a touchdown to go up 10-7.

Then, just inside the 2-minute warning, Haskins seemed intent on getting the ball to Inman and was picked off by linebacker Malcolm Smith. The Browns scored three plays later to take a 17-7 halftime lead.

In the third quarter, after the Browns went up 24-20, Haskins again tried to connect with Inman but linebacker B.J. Goodson swiped this throw.

Rivera was asked which of the interceptions upset him most.

“They all bothered me,” he said. “It’s all part of the game, and he knows better in some cases. It’s just unfortunate. Believe me, he’s not doing it on purpose. He’s trying to help us win a football game. That’s the thing we’re going to live with. We’re trying to live with the mistakes. The only way to find out if he can do it is to keep him on the football field.”

Haskins was consoled on the sideline by star defensive end Chase Young, who left in the first half with a right groin injury and didn’t return.

“For a guy like that, someone I look at and admire his work ethic and have love for, like a brother to me, for him to have the utmost respect for me and the trust to get the job done, not only that but other guys on the team,” Haskins said. “My teammates did a great job trying to keep my head up knowing there were plays I wish I could have back.

“I’m going to make sure I’m better and take the blame for what I did and get better from it.” 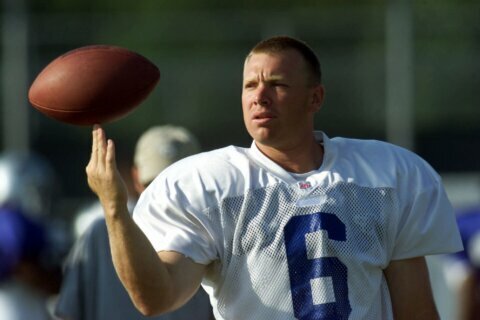