Lawyers representing more than 20 former Washington Football Team employees sent a letter to owner of the team Daniel Snyder, asking him to release all of them from their non-disclosure agreements.
Listen now to WTOP News WTOP.com | Alexa | Google Home | WTOP App | 103.5 FM

Attorneys Lisa Banks and Debra Katz say that the move is necessary to allow the former employees to speak freely about the “toxic and sexually hostile work environment” they experienced under his leadership,” they said.

“Like all victims of sexual harassment and sexual exploitation, these women should be afforded the ability to talk openly about their experiences in order to seek the support and healing they need and also to shine a light on the abuse to which they were subjected to help bring about accountability,” the letter said.

The lawyers asked Snyder to fully release their clients from their NDAs so they are able to freely discus their work environment under their time with the team.

Snyder has already agreed to release employees from their NDAs for the limited purpose of speaking only with investigators as part of the NFL’s investigation into the team.

In another letter to Snyder on Friday, the attorneys notified Snyder of their intent to file a lawsuit after “reviewing the highly sexualized and exploitative videos of team cheerleaders,” as detailed in The Washington Post report.

“The surreptitious creation and likely dissemination of these videos that sexually exploit and demean female employees give rise to civil violations under Virginia law,” Banks and Katz wrote in a press release.

Banks and Katz wrote a letter calling on Commissioner Roger Goodell and the NFL on Aug. 27 to initiate its own investigation of the Washington Football Team, suspend Snyder pending the outcome of the investigation and direct him to refrain from taking legal action against those who have come forward, among other demands.

However, after Snyder was implicated in a secondary report by the Washington Post, the NFL announced it would take control of all investigations related to Washington going forward.

WTOP has reached out to Snyder’s representatives for comment. 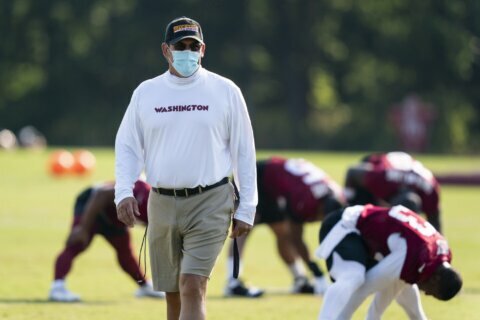