Redskins’ Keenum has foot injury, status vs. Giants in doubt

Case Keenum's foot injury could put him in danger of not starting at quarterback for the Washington Redskins on Sunday at the New York Giants.
Listen now to WTOP News WTOP.com | Alexa | Google Home | WTOP App | 103.5 FM

Coach Jay Gruden said Keenum underwent an MRI and did not participate in a walkthrough Wednesday.

If Keenum can’t play, the 0-3 Redskins will either turn to longtime backup Colt McCoy coming off a broken leg or ask 15th overall pick Dwayne Haskins to make his NFL debut.

“We’ll evaluate everything (later in the week), see where Case is,” Gruden said. “I assume Case is going to be able to play. He’s a tough guy. And then we’ll deal with the ifs (Thursday) and Friday.”

Keenum suffered the foot injury in a 31-15 loss to the Chicago Bears on Monday night. The veteran QB turned the ball over five times in that game.

Despite those struggles, Gruden on Tuesday said Keenum deserved the chance to start against New York. Because of the injury, Washington could go with any of three options Sunday as the starter and the backup.

“We got guys that can play, that can throw the ball,” tight end Vernon Davis said. “Colt McCoy, we know what he can do. What know what the young guy Haskins can do.”

McCoy was listed as a full participant on the injury report, which is an approximation of what the Redskins think would have happened in practice.

McCoy has been inactive the first three weeks while still dealing with the lingering effects of breaking his right leg in December and hasn’t taken part in a full practice since Aug. 11.

“I haven’t seen him throw a ball in about a month and a half,” Gruden said of McCoy, who has been with Washington since 2014.

“We’ll have to see him in individual (drills Thursday) and have him throw some balls and see where he’s at, see how he feels as far as pushing off is concerned. He’s been doing a lot on the side on his own, so I don’t think he’d be cleared to practice unless he felt pretty good about it. But still we want to see him take the snap with people coming at him and making some throws.”

Haskins versus Daniel Jones in a matchup of first-round picks is a tantalizing possibility, especially given what the sixth overall selection did in his NFL debut last week .

But Haskins has not gotten much work with the first-team offense since training camp, and the Redskins did not want to rush him in this quickly.

If all things are equal and McCoy is healthy, he’d likely get the nod over Haskins.

“I think the biggest thing in how to handle Colt is how he’s feeling mentally and physically,” Gruden said.

“If he feels like he’s ready to go, then I’ll have to make that decision. And I’ll see where Dwayne is as far as the game plan prep is concerned. If I feel great about Dwayne and Case can’t go, we’ll go with Dwayne and we’ll see how it goes.”

The Redskins’ three quarterbacks weren’t made available to reporters Wednesday. That didn’t stop teammates from expressing confidence in all of them and praising Haskins for his development.

“He’s been working hard every day,” running back Chris Thompson said. “He’s been getting better every day and getting himself for prepared for when or if that opportunity comes this year. He’s a young guy. He’s continuing to grow. I’m happy to see what I’ve seen so far.”

Gruden said Haskins is coming along nicely off the field in learning the offense and adapting to the pro game. He isn’t sure what will happen if the Ohio State product is thrust into the spotlight against Jones on Sunday in East Rutherford, New Jersey.

“I think he’ll be fine, but we’ll have to wait and see,” Gruden said. “That’s something that you can’t really gauge until you get out there and you see the defensive front for the Giants and the coverages changing and the blitzes changing and how you react.”

Haskins got the majority of work during walkthrough Wednesday, the team’s first on-field work since the Bears game. It’s a short week before close to a must-win game, but Gruden isn’t tipping his hand just yet.

“We’ll just wait and see,” Gruden said. “We got a little ways to go before I make any crazy decisions.” 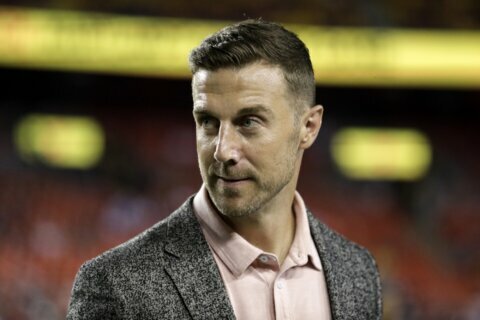