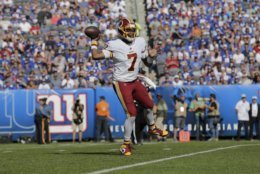 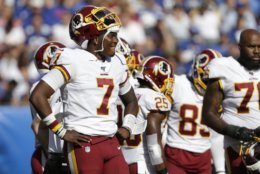 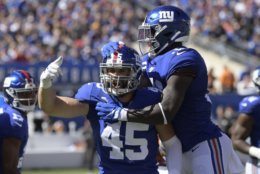 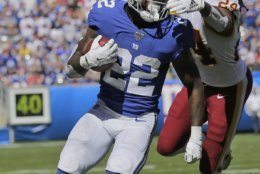 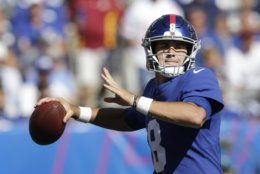 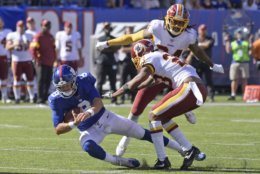 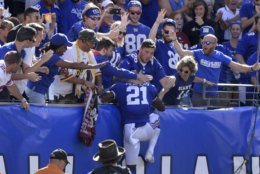 EAST RUTHERFORD, N.J. (AP) — Daniel Jones provided the spark and the New York Giants are feeding off it on what they hope is the path back to the playoff hunt.

Jones threw a touchdown pass and created excitement with his arm and legs, Saquon Barkley’s replacement Wayne Gallman scored two touchdowns, and Jabrill Peppers scored on a 32-yard interception return to lead the suddenly revived Giants to 24-3 victory over the winless Washington Redskins on Sunday.

“This is a team beginning to play a little better, we’re beginning to jell,” said veteran cornerback Michael Thomas after the Giants (2-2) won their second straight. “Daniel has been a difference with those fresh legs, young legs, and making plays. They (the offense) have some stuff to work on and we do, too. But I like the things we are doing and we just want to keep getting better.”

The mistake-prone Redskins (0-4) are heading the other way. They were limited to 176 total yards by the much-maligned New York defense and they didn’t get a boost when embattled coach Jay Gruden inserted first-round pick Dwayne Haskins Jr. at quarterback for Case Keenum.

The Redskins’ start is their worst since losing their first five in 2001.

“You’re 0-4 and you’ve got two options,” Gruden said. “You can hang your head and feel sorry for yourself or you can come out and battle your (butt) off next week, which I know we will. It’s unfortunate. Nobody saw this coming, starting the season like this. I sure didn’t, but here we are. Reality has set in.”

Jones, the No. 6 pick overall in the draft, has the Giants thinking about the here and now since replacing two-time Super Bowl MVP Eli Manning as the starting quarterback. He rallied New York from an 18-point deficit in his first start against the Buccaneers last week, and was solid early, leading New York to touchdown runs on its first two series.

The Duke product was 23 of 31 for 225 yards with two interceptions. Winning tends to overshadow the mistakes.

“We have to improve a number of things as a team if we want to keep it going,” Jones said. “I think it’s important that we understand that and like I said, keep moving forward.”

Gallman, who is going to start for the foreseeable future with Barkley battling a high ankle sprain, caught a 6-yard TD pass and scored on a 1-yard run to stake New York to a 14-0 lead.

“All I feel is energy from my teammates,” Gallman said. “We want it and we just want to be better. I can only picture how much better we can be next week.”

Keenum was 6 of 11 for 37 yards and an interception when Haskins came on midway through the second quarter. The move came after Quinton Dunbar picked off Jones on consecutive passes, but Haskins went 9 of 17 for 107 yards and could produce only a 21-yard field goal by Dustin Hopkins on his initial series. He was picked off three times, the last two by Janoris Jenkins .

“I had a whole bunch of emotions. I wanted to win the game,” Haskins said. “We didn’t. It’s on to next week.”

Keenum, who had battled a foot injury this week, did not sound happy being lifted. He said he was surprised.

Rookie linebacker Ryan Connelly’s second interception in as many weeks set up an opening 32-yard drive that Gallman ended with his reception. Gallman’s short run ended a 13-play, 94-yard march the Redskins kept alive when a third-down holding penalty on cornerback Fabian Moreau nullified a sack.

Washington was flagged 12 times for 58 yards.

Jones kept the first drive alive with a 5-yard pass to Sterling Shepard on a gutsy decision by coach Pat Shurmur to go for it on fourth-and-2 at the Redskins 24.

Aldrick Rosas kicked a 30-yard field goal on the final play of the first half and Peppers closed out the scoring with his interception return.

Peppers jumped into the stands at the back of the end zone following his first touchdown with the Giants. It looked like a Lambeau Leap, but just as easily could have been a leap into the Dawg Pound in Cleveland. Peppers was part of the deal that sent Odell Beckham Jr. to Cleveland.

Redskins safety Landon Collins appeared upset after his first game back at MetLife Stadium. He was involved in a scuffle near the Giants bench after the game ended. It didn’t last long.

Redskins: CB Josh Norman left the field in the first half with a knee issue and returned. .

Giants: Connelly was carted off in the fourth quarter with an injury to his right knee. … LB Lorenzo Carter, who was bothered by an elbow injury earlier in the week, sustained a neck injury in the second half.