Moses knows how important it is, having once gotten a second chance of his own and wants to give that to these students. Moses’ 1.6 GPA in high school wouldn’t allow him to play college football. He was sent to Fork Union Military Academy to improve his grades, a life-changing moment for him.

“For me, (it was) going to Fork Union and having that military discipline,” he said. “But not everyone gets that chance. Fork Union is $25,000 a year. I was blessed to have a scholarship to go there.”

He now sees how that changed his life, and that’s how he hopes to give some of these kids a second chance.

“It’s one of the struggles I had coming out of high school,” he said. “Not everyone can have that second opportunity. Everyone isn’t 6-foot-6 and 330 pounds. So, if we can cut the chances of our children having to go through that second chance, it will be a lot better.”

Having gone to the University of Virginia and now playing in the NFL, Moses never loses sight of where he’s from.

“It’s a humbling situation, anytime you get to come home and see different things,” he said. “You always hope for the better. I’m trying to do what I can to make the progression go and try to give back.”

He can look these kids in the eyes and see himself sitting there.

“I do, all the time,” he said. “Especially the younger athletes. We take it for granted until it’s taken away and, sometimes, when it’s taken away, it’s too late.”

Note: Moses left Tuesday’s practice early as a precaution due to the heat. 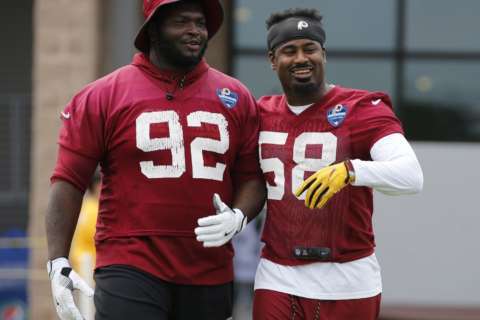 Coming off two torn Achilles, Galette off to good start in Richmond