FANTASY PLAYS: Players to start and sit for NFL Week 12

Another season of fantasy football, another group of start-or-sit scenarios to answer.

It’s not just enough to draft the right team and make the right moves off the waiver wire. We all know that. We also have to make sure that we are starting the correct players each week.

Of course, we have our studs, anchors, and the players we’re starting virtually no matter what. We don’t need anyone to tell us to start Travis Kelce.

But, the further down the lineup we go, the more those questions trickle in.

Then again, no player is a “must-sit” in every scenario, and perhaps the WR3 you’ve been plugging in each week may have a better alternative.

That’s why I like to switch up the typical start-or-sit column format. I’m going to be listing out all relevant fantasy football players each week and bucketing them into tiers.

Take some of the guesswork out of setting our lineups weekly, I’ll be leveraging thousands of slate simulations that are based on numberFire’s player projections with dynamic measures for variance, such as quarterback rushing, running back receiving, and receiver target depth.

These players are listed in order of frequency of hitting the stated threshold (i.e. QB12, RB24, WR24, and TE12 performances), and higher on the list means more able to start.

The groupings reflect a 12-team, single-quarterback league with the following hypothetical in mind: if I had other viable options on my bench or the waiver wire, should I start this player this week?

Justin Fields has a separated shoulder. If fully healthy, he’s at the low end of Tier 1. He is initially projected at half.

Kyler Murray was limited in practice all week last week. If he starts, he’s at the top of Tier 2.

Although we have a few injuries to key quarterbacks, including Fields and Murray, there are no byes, so we probably don’t have too many huge start-or-sit decisions to figure out otherwise. We have nine quarterbacks above 50% top-12 odds even if we assume Fields sits. Most teams in your leagues should have starters lined up.

Tom Brady is rested up after a Week 10 win in Germany and a bye last week. This week, he’s facing the Cleveland Browns, who rank 25th in adjusted pass defense, according to numberFire’s metrics. Brady has largely taken advantage of his three matchups against bottom-10 pass defenses to the tune of 296.3 yards per game. He averaged just 1.3 touchdowns in those games, though, and the wind is projected to be pretty high for this matchup. Brady makes for a high-end QB2 option this week with a pretty wide range of outcomes.

Derek Carr has put up five top-12 weeks this season, but has just one week better than the QB9 — surprisingly against the Tennessee Titans in Week 3 on the road. He gets a plus matchup against the Seattle Seahawks’ 23rd-ranked pass defense this week. Carr has, though, been very efficient in two matchups against bottom-10 pass defenses: 250.0 yards and 1.5 touchdowns per game against the Houston Texans (28th) and Jacksonville Jaguars (27th). He played 0.19 points per play over expected — by numberFire’s expected points model — against those teams. He should be able to give us another low-end QB1 outing this week.

Taylor Heinicke remains under center for the Washington Commanders for a matchup against a weak Atlanta Falcons defense. Atlanta is 30th in overall adjusted defense and 31st specifically against the pass, per numberFire. Heinicke, overall, has performed below expectation once accounting for opponents faced. That being said, he has faced only two below-average defenses, including the Texans (28th) last week. In that game, Heinicke put up 191 yards and no touchdowns. He hasn’t exactly taken advantage of great matchups, so he’s a low-end QB2 option for the week for those who need streamers.

Leonard Fournette is initially projected with a half workload.

Jaylen Warren is projected with a half workload, boosting the expectation for Najee Harris.

The stock on Dameon Pierce is trending down. The Texans are big underdogs against the Miami Dolphins and Houston’s offensive expectations are on the low end once again. Pierce has not scored since Week 8 (a three-game stint with no touchdowns) but remains on the cusp of RB2 territory regardless. The problem is that this week could look a lot like last week when the Texans were blown out. Pierce had just 10 carries and three targets for 17 total yards. Though the matchup isn’t as difficult, Pierce is more likely to be a low-end RB2 than inside the top 12 this week.

Samaje Perine rates out really well if we assume that Joe Mixon is ruled out with a concussion. Perine should have the goal-line and receiving work. He could lose some touches to Trayveon Williams and potentially Chris Evans, yet there’s still room for him to be a solid play. Perine, with Mixon leaving early last week, had a 69.2% snap rate and scored three times through the air.

Antonio Gibson took a big step forward last week when Washington beat the Texans easily. That type of script should have been great for teammate Brian Robinson; however, Gibson was the one with a 67.2% snap rate and 18 carries. Robinson played on 34.3% of the snaps and had 15 carries. With J.D. McKissic on injured reserve, Gibson seems set for a featured role and steps right into a great matchup against the Falcons, who rank 21st, on average, across three key rushing metrics and are average against receiving backs.

With or without Leonard Fournette, Rachaad White is entering the FLEX conversation. White earned the start in Germany against the Seahawks in Week 10 before a bye, and Fournette’s injury in that game paved the way for a 64.9% snap rate and 105 scrimmage yards. Fournette was still involved in the red zone, but White seems like he’s trending up quickly. A matchup with the Browns, who are 32nd in adjusted fantasy points per carry allowed to backs, makes White a good process play.

There are a lot of early week uncertainties. Ja’Marr Chase, JuJu Smith-Schuster, Mike Williams, Jerry Jeudy, Rondale Moore, and Kadarius Toney are initially projected with a half workload.

It’s a full week for receivers, and the variance within the position keeps a lot of rates down for tertiary and quaternary types of fantasy receivers.

Since Week 7 with Taylor Heinicke under center, Terry McLaurin has a stellar 31.6% target share for 8.6 targets per game and a whopping 52.0% air yards share. His yards-per-route-run rate is an elite 2.93. Curtis Samuel’s target share is less appealing at 16.2%, but he is still averaging 3.2 carries per game in that span (for 20.2 yards). This is a sneakily fun duo, soaking up a lot of usage and entering a great matchup against the Falcons, who are 25th in adjusted fantasy points per target allowed to receivers.

Let’s take a closer look at the Green Bay Packers’ pass catchers. Christian Watson has been a top-five weekly receiver in consecutive weeks, thanks to five touchdowns over two games. That’s great. The concern? The target totals. Watson has scored five times on 14 targets (35.7%). You probably don’t need me to tell you that it’s not sustainable. Watson, then, over the past two games, is giving us a 25.0% target share in a run-heavy offense. Allen Lazard has the better market share in that span (26.8%), but has a catch rate over expectation of -15.7% (Watson’s mark is +9.9%.). Both are on the low-end of the Tier 2 list. Just don’t bench better options for Watson.

We may as well stick with the teammate approach and take a dive into the Pittsburgh Steelers’ numbers since the Chase Claypool trade. In two games since the deal, it’s actually tight end Pat Freiermuth leading the way with a 29.7% target share. Both George Pickens and Diontae Johnson are tied for second at 15.6% target shares. The better leverage on those belongs to Pickens, who has a 15.3-yard average target depth; Johnson’s mark is 9.5. Pickens has (somewhat) quietly finished as the WR20, WR22, WR54, WR11, WR129, WR23, and WR9 since Week 4. Johnson’s best finish all season is as the WR29 back in Week 3.

Gerald Everett is projected with a half workload initially.

David Njoku was still limited in practice on Friday last week and returned last week to a limited role: 18 routes (a 42.9% participation rate) for three targets and just 17 yards against a tough defense. This week, he’s up against the Tampa Bay Buccaneers, who are 21st in adjusted fantasy points per target allowed to the position.

Assuming he gets in a full practice by Friday, we should be feeling good about rolling him out in our lineups again.

Taysom Hill had a better role this past week than in recent games. Hill’s snap rate was still only 42.9%, but he attempted three passes, he ran nine times, and he drew a target. The New Orleans Saints want to get him more involved, so if you need a tight end this week and Hill is available, give him a go. There’s a higher floor than with most tight ends due to the rushing, and the unique involvement gives him a ceiling. He’s one of the hardest players in the league to account for — both on the field and in the simulations.

The Falcons are pretty solid against tight ends, but it’s worth noting they’ve allowed seven end zone targets to the position (second most), but let up just a single score on those, which seems pretty unsustainable. A lot of Commanders are viable this week, and for tight end-needy teams, Thomas can come through in a pinch. 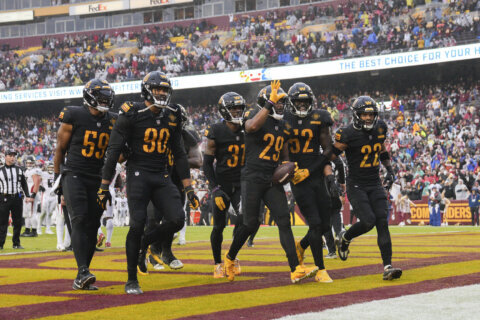