Chase Young is expected to practice with the Washington Commanders this week for the first time since tearing the ACL…
Listen now to WTOP News WTOP.com | Alexa | Google Home | WTOP App | 103.5 FM

Chase Young is expected to practice with the Washington Commanders this week for the first time since tearing the ACL in his right knee 11 months ago.

Coach Ron Rivera said Young will take part in positional workouts Wednesday before getting ramped up to participation in team drills at some point. It’s not clear when the young edge rusher will make his season debut.

“He’ll work on the side, and then we’ll see how he is after the day and then going into the next day, and that’ll dictate what our next step is in terms of where he goes from there,” Rivera said Monday on a video call with reporters. “He’s going to have to get back into condition. Believe me: Playing football is completely different from rehabbing, obviously, and the more reps he can get on the practice field prior to stepping onto the game field would be very beneficial to him.”

Washington has three weeks to activate Young off the physically unable to perform list once he resumes practicing.

Young, the 2020 No. 2 pick out of Ohio State who earned Defensive Rookie of the Year honors by leading first-year players with 7½ sacks that season, tore the ACL on Nov. 14 against Tampa Bay. He underwent surgery that involved grafting a part of his left patellar tendon on the other side to fix the tear.

Because of that and his long-term value to the franchise, Young, doctors and the team have taken a slow, methodical approach to his recovery process. Rivera said Young had a final checkup with Dr. James Andrews, who performed the surgery, which was the final step for the 23-year-old to be cleared to practice.

Rivera said Young was “fired up” and looked ready to go upon learning he could start taking part in practice. Still, as they did with rookie running back Brian Robinson Jr. on the non-football injury list after being shot twice in an armed robbery, the Commanders plan on taking it slow with Young rather than rushing him back.

Even if it’s a stretch to think Young could return Sunday against the 6-1 Minnesota Vikings, it’s not out of the realm of possibility he plays Monday, Nov. 14 at the unbeaten Philadelphia Eagles. The next option after that would be Sunday, Nov. 20 at the Houston Texans.

Young’s eventual return is expected to bolster a front four by adding a fourth first-round pick to a stout group that includes Jonathan Allen, Daron Payne and Montez Sweat. The Commanders have picked up seven sacks and improved to 13th in the NFL on defense during their three-game winning streak that got them back to .500 on the season. 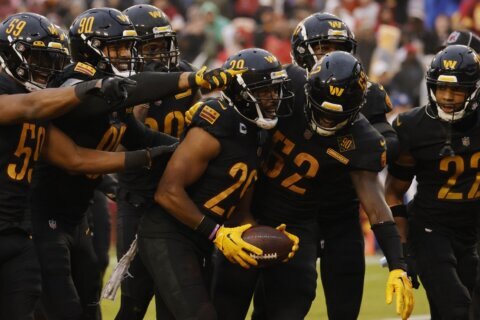 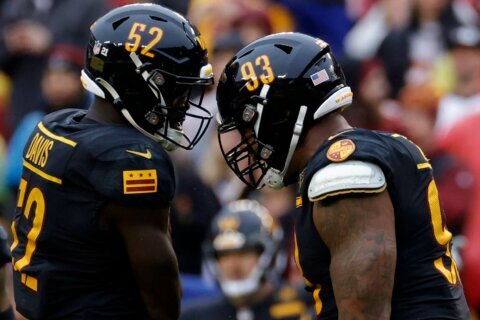