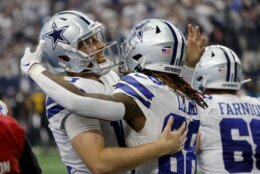 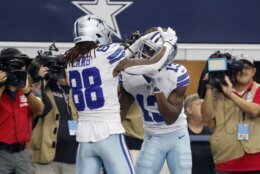 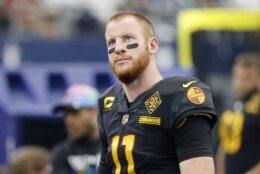 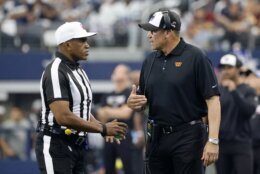 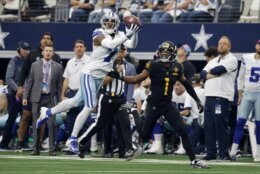 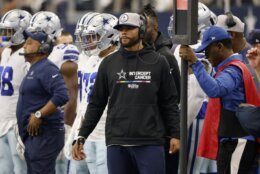 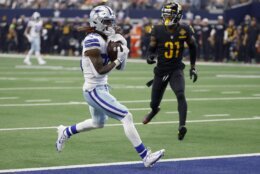 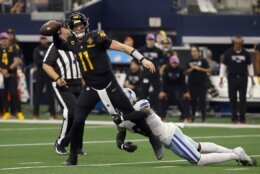 ARLINGTON, Texas (AP) — Cooper Rush scrambled to his right, scanning the end zone for a target on a potential go-ahead touchdown.

Dak Prescott’s backup found one he hadn’t played with yet in a remarkable run as the super sub for the Dallas Cowboys.

Rush won again filling in for Prescott, throwing a scoring pass to Michael Gallup in the receiver’s 2022 debut as the Cowboys beat the Washington Commanders 25-10 on Sunday.

Rush also had a TD toss to new No. 1 receiver CeeDee Lamb while improving to 4-0 in his career as a starter, the first Dallas quarterback to accomplish the feat.

The three Rush-led victories this season for the Cowboys (3-1) have been since Prescott fractured the thumb on his throwing hand when the defending NFC East champs lost their opener to Tampa Bay.

The Commanders (1-3) lost a third consecutive game in Carson Wentz’s reunion with an old division rival from his days as the No. 2 overall pick by Philadelphia.

The Dallas defense hasn’t given up more than 17 points in a game during Rush’s run. It is the first time the defense has held the team’s first four opponents to 19 points or fewer since 1973.

“I guess I would say the defense and all the breaks you catch, it’s just kind of lucky,” said Rush, who was 15 of 27 for 223 yards and hasn’t thrown an interception in any of his three starts this season. “QB win stats, they are what they are. It’s a team game, and it’s nice the defense having our back like that.”

Gallup was out with a calf strain when Rush won his first start as Prescott’s replacement last season in Minnesota.

The fifth-year receiver’s return was exactly nine months after he tore the anterior cruciate ligament in his left knee on a Jan. 2 touchdown catch in a 25-22 loss to Arizona in Week 17 last season.

The 9-yard catch for a 12-7 second-quarter lead came in the back of the same end zone as the injury. Then Gallup grabbed Lamb in a bear hug before celebrating with other teammates.

“I’ve been envisioning it ever since I got hurt,” Gallup said. “So when I come back, I need to make a statement. So it means I’ve done the work. It’s a good feeling.”

Washington outgained Dallas 297 yards to 279 but had several promising drives stalled by penalties, and flags also wiped out interceptions by Benjamin St.-Juste and Kamren Curl.

The Commanders finished with 11 penalties for 136 yards after totaling 128 penalty yards the first three weeks.

“Everything that we’re doing right now is completely controllable,” said receiver Jahan Dotson, whose 10-yard TD catch in the second quarter gave Washington a 7-6 lead. “It’s obviously frustrating, not winning. We’ve just got to figure ourselves out.”

The Cowboys believed Gallup’s return would help Lamb in his role leading the group after the offseason trade of Amari Cooper to Cleveland in a cost-cutting move. For one game at least, they were right.

Lamb had three consecutive catches for 56 yards on a first-half drive to the second of Brett Maher’s four field goals.

The third-year pro fooled the defense with a nice fake on a slant for a 30-yard score and a 22-10 lead on the first play of the fourth quarter.

Lamb had six catches for 97 yards a week after he scored the go-ahead TD in a victory at the New York Giants. Gallup had two grabs for 24 yards while drawing pass interference penalties of 38 and 27 yards.

Prescott had the same role from the previous home game, wearing a headset while cajoling the crowd for the defense. But he’s much closer to a return now. It’s possible he could be back next Sunday at the defending Super Bowl champion Los Angeles Rams.

“I can’t give you anything there medically,” owner/general manager Jerry Jones said. “I don’t think anyone knows how he’s going to grip the ball but certainly, we feel a lot better the way Cooper is playing, the way our team is playing.”

ANOTHER, AND A FIRST

Trevon Diggs, last year’s NFL interceptions leader with 11, had his second of the season, and in as many weeks, for Dallas on a deep throw from Wentz with the Commanders trying to get in field goal position late in the first half.

Rookie DaRon Bland, replacing Jourdan Lewis after Lewis was a late scratch with a groin injury, had the first of his career to essentially seal the victory in the fourth quarter.

Washington owner Dan Snyder, under investigation by the NFL over alleged workplace misconduct within his club, was on the field before the game with Jones. Snyder is suspended from day-to-day operations and hasn’t been seen in public at Commanders home games.

Cowboys: All-Pro RG Zack Martin exited in the third quarter after colliding with another player and favoring his right leg. He returned. … DT Quinton Bohanna injured a shoulder in the fourth quarter.

Redskins: LB Milo Eifler was sidelined by a hamstring injury and didn’t return. … S Percy Butler was announced as questionable to return with a quadriceps issue.

Commanders: Tennessee at home next Sunday.

Cowboys: Dallas is 0-2 against the Rams since they moved back to Los Angeles. The first loss was a divisional playoff game during the 2018 season. 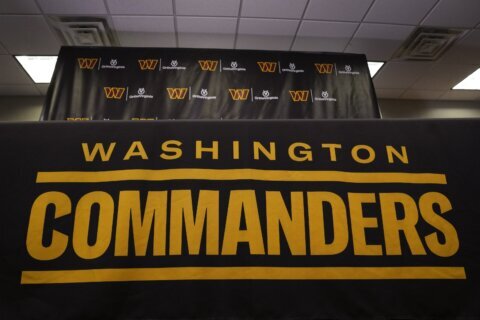