Jaguars-Commanders is an Eagles reunion for Wentz, Pederson

Carson Wentz and Doug Pederson meet again Sunday when the Washington Commanders host the Jacksonville Jaguars in the start of a new era for each franchise.

Washington is playing its first game as the Commanders and with Wentz as starting quarterback after cycling through eight players at that position the previous three years, and coach Ron Rivera is banking on Wentz to get the team back to the playoffs.

Pederson is coaching his first game with the Jaguars, tasked with turning around the lowly NFL franchise after an ill-fated season with Urban Meyer in charge.

Less than two years removed from their time together with Philadelphia, which included winning the Super Bowl in the 2017 season after the QB tore the ACL in his left knee in December, Wentz and Pederson stand in each other’s way of getting his latest job off to a winning start.

“It’s going to be fun to watch him play,” Pederson said. “He’s on the other side, and we want to win, but he’s a competitor. He’s going to do everything in his power to win that football game as well, and I’m looking forward to competing against him.”

In a cruel twist of schedule-making, Wentz is facing the Jaguars again after losing to them in the season finale with Indianapolis last season, when he turned the ball over twice and the Colts blew their chance to make the playoffs. After owner Jim Irsay questioned whether acquiring Wentz was a mistake in the first place, the Colts traded him to Washington — his third team in as many seasons.

Wentz brushed it off as “a fun story” for others, but said it’s just Week 1 or him.

“It’s another football game,” Wentz said. “Last year was last year. It was a different team. I was with a different team. They were coached by a different coach. A lot of new things, so for me, this is an entirely new script that we’re starting off and hopefully starting the right way.”

The Commanders have legitimate playoff expectations in Rivera’s third season as coach and head of football operations, especially because they have what looks for now to be a weak schedule. But that’s obviously predicated on winning games against teams like Jacksonville and Week 2 opponent Detroit, even though everyone expects the Jaguars to improve under Pederson.

“They’re going to be coached differently,” Rivera said. “Their outlook and their approach will be different they’ll be doing like we did a couple years ago and that’s trying to get away from who they’ve been. Doug will do his best to get those guys headed in the right direction.”

There’s not much direction to go but up after finishing last in the NFL each of the past two seasons, including a 2-11 record under Meyer last year before he was fired. One of the rewards for being in the league basement was the chance to select quarterback Trevor Lawrence and pass rusher Travon Walker with the top picks in the past two drafts.

Pederson can now try to coach up Lawrence like he did Wentz, though the situation is different. He coached the Eagles when they picked Wentz second in 2016 and got to mold him from the start and is taking over Lawrence’s learning curve later in the process.

“Although we’ve seen tremendous growth in Trevor, Year 2 for Carson with us, there was another step, another leap there,” Pederson said. “Those are things we’re trying to get Trevor to: that level with Trevor in our system. And you’re going to see it probably throughout the course of the season, but I think time will tell with him.”

Washington rebranded as the Commanders in February after dropping the Redskins name in the summer of 2020. The organization was known as the Washington Football Team the past two seasons during the transition.

“It’s cool to be involved in something new,” Wentz said. “We look forward to going out there with a new sense of a mission, so to speak, and a new purpose.”

Jacksonville will try to end two lengthy losing streaks in the opener. The Jaguars have dropped 17 consecutive road games, tied for the ninth-longest skid away from home since the AFL-NFL merger, and have lost an NFL-record 16 in a row against NFC teams.

Jacksonville’s last win against the NFC came at the New York Giants in the 2018 season opener.

GIBSON RUNS ON WITHOUT ROBINSON

Rookie Brian Robinson Jr. was expected to be Washington’s starting running back before he was shot twice in the right leg during an attempted robbery Aug. 28. The combination of his strong training camp and preseason and incumbent Antonio Gibson’s fumbling woes continuing contributed to that outlook.

With Robinson out at least the first four games, it’s Gibson’s job again, and Rivera said the Commanders trust him and are “going to give him the ball.”

“I’ll get back to playing football and having fun,” Gibson said. “I still feel like I’m one of the best running backs in the league and I’ve got something to prove.”

Five-time Pro Bowl guard Brandon Scherff says it’s “going to be really weird” to return to the place where he spent the first seven years of his NFL career.

Scherff signed a three-year, $49.5 million contract to join Jacksonville in free agency, leaving behind a place he called home for nearly a quarter of his life.

“Had a lot of fun, a lot of memories, but it’s going to be different,” he said. 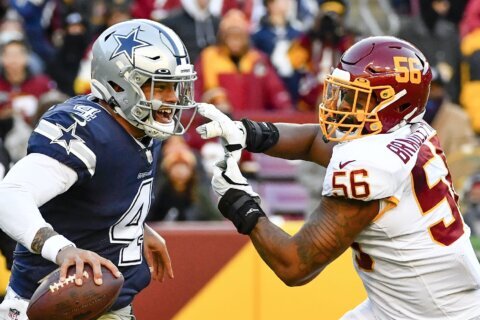 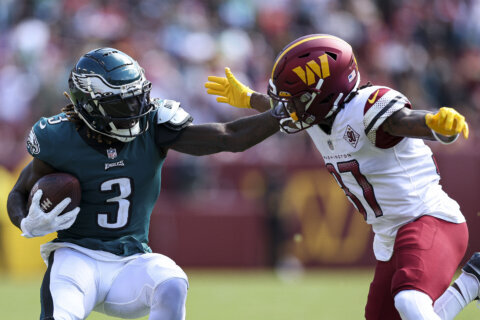