Lars Eller and T.J. Oshie also scored for the Capitals, who are 2-5-3 in their last 10 road games. Charlie Lindgren made 28 saves.

”We were playing to our identity with good forechecking and forcing some turnovers and having some long times in the zone cycling and long attacks,” Eller said. “That is the stuff we are doing when we are playing our best and we saw some of that today. There were a lot of positives.”

Brett Kulak and Connor McDavid had goals for the Oilers, who have lost two of their last three. Stuart Skinner stopped 47 shots.

Dowd gave Washington its first lead of the game 7:13 into the third as he got a drop pass from Aliaksei Protas and fired it past Skinner for his fourth of the season.

“It was one of our best wins of the season,” Capitals coach Peter Laviolette said. “I thought it was every guy in there that played really hard and came out the right way in the first period and were doing the right things. … We had gotten away from that for a couple of games. I thought we did a good job tonight of trying to push it and control the game.”

Washington had a 22-12 advantage of shots in the first period. Skinner was rock solid, particularly during a Capitals power play where he made seven saves in one sequence, including a pair of one-timers by Alex Ovechkin and an opportunity in tight for Oshie.

“We come in here and we talk about it every day,” Oilers defenseman Darnell Nurse said of his team’s rough starts. “We sit here after the game, talk about it over and over and over. … We want to have good starts each and every night but, you know, we’re sitting here and it’s a part of our game. We’re almost a quarter of the way through the season.

“The more we just talk away and pester at it, we need to just show up and play. Relax, pin our ears back and come out on the on the attack.”

The Oilers opened the scoring 1:44 into the second as Kulak fired a shot from the point with traffic in front for his first of the season.

Washington tied it just under six minutes later. Leon Draisaitl had a turnover in his own zone, giving Eller a clear path to the net and he beat Skinner following a deke for his fourth.

Edmonton regained the advantage with 4:35 to play in the middle period when McDavid picked off John Carlson’s pass and blazed up ice on a breakaway before beating Lindgren through his legs for a short-handed goal. His 22nd goal of the year pushed his goal streak to five games.

The Capitals got the goal back on the same power play, however, on a perfect three-way passing effort that was finished off when Oshie fired a feed from Dylan Strome into the net. The shot totals were 41-19 for Washington after 40 minutes.

The Oilers were without Evander Kane (wrist surgery), Warren Foegele (undisclosed), Ryan McLeod (undisclosed) and Zach Hyman, who took a stick to the head in Saturday’s contest against Montreal. The Oilers did get some good news, with Kailer Yamamoto able to return after missing 11 games with an undisclosed injury.

Capitals: At Philadelphia on Wednesday night in finale of a six-game trip.

Oilers: Host Arizona on Wednesday night in the third of a four-game homestand. 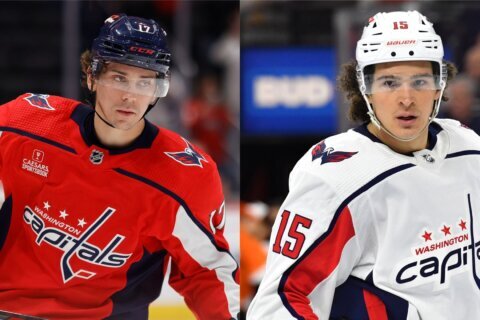 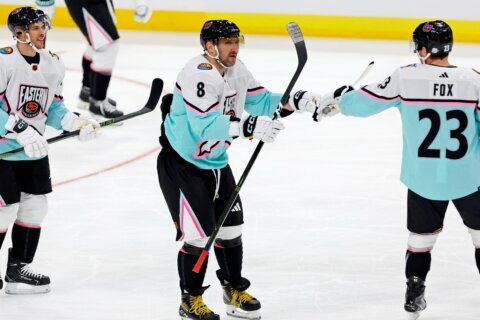