Today in Sports History-Week Ahead, Nov. 4-10

1952 — Maurice Richard of the Montreal Canadiens becomes the NHL’s leading career goal scorer with his 325th in a 6-4 victory over the Chicago Black Hawks.

1959 — Elgin Baylor of the Minneapolis Lakers scores 64 points against the Boston Celtics.

1970 — Tom Dempsey of New Orleans kicks an NFL-record 63-yard field goal on the final play of the game to give the Saints a 19-17 victory over the Detroit Lions.

2003 — John Gagliardi becomes college football’s career victory leader when St. John’s rallies to beat Bethel 29-26. Gagliardi, in his 55th season and his 51st at the Minnesota school, gets his 409th victory, passing Eddie Robinson, who retired in 1997 after winning 408 games at Grambling.

2005 — Pierre Turgeon becomes the 34th player in NHL history to reach 500 goals, scoring in the third period of Colorado’s 5-2 win over San Jose.

1946 — Second-ranked Notre Dame fights to a 0-0 tie with No. 1 Army at Yankee Stadium to snap the Cadets’ 25-game winning streak. The Irish defense holds Army’s running backs Doc Blanchard and Glenn Davis to a combined 79 yards.

1953 — The U.S. Supreme Court rules 7-2 that baseball is not subject to antitrust laws, maintaining the game is a sport, not a business.

1984 — Larry Holmes scores a 12th-round technical knockout of Bonecrusher Smith to retain the IBF heavyweight title in Las Vegas. 1989 — The Milwaukee Bucks beat the Seattle SuperSonics 155-154 in five overtimes, matching the second-longest game in NBA history. The game is the longest game since the advent of the 24-second shot clock in 1954.

1991 — Marshall Faulk of San Diego State returns after missing three games due to injury and breaks the NCAA record for touchdowns by a freshman with his 20th in a 42-32 win over Colorado State.

1991 — Houston’s Roman Anderson becomes the first player in NCAA history to surpass 400 points by kicking a 32-yard field goal in the Cougars’ 23-14 victory over Texas.

1996 — Evander Holyfield pounds Mike Tyson into submission at 37 seconds of the 11th round to win the WBA heavyweight title in Las Vegas. Holyfield, a 7-1 underdog, becomes the second man to hold a piece of the heavyweight title three times.

2005 — Carolina’s Erik Cole is the first player in NHL history to be awarded two penalty shots in one game. He scores on the first, helping the Hurricanes defeat Buffalo 5-3.

2011 — Joe Paterno is fired by the Penn State board of trustees despite saying he would retire as coach after the football season ended. Paterno is brought down by the growing furor over the handling of child sex abuse allegations against assistant coach Jerry Sandusky. Penn State President Graham Spanier is also ousted.

2014 — Aaron Rodgers throws six touchdown passes to tie the Green Bay game record and match the NFL record for a half in a 55-14 rout of the Chicago Bears. Rodgers ties the NFL mark for TD passes in a half set by Oakland’s Daryle Lamonica in 1969.

2016 — Golden State makes 17-of-33 three-pointers in a 116-95 blowout of the Dallas Mavericks, with teammates Stephen Curry, Kevin Durant, Klay Thompson, and Draymond Green all making four apiece. The Warriors are the first team to have four players hit four three-point shots.

2021 — 105 year-old Julia Hawkins sets a world record as the first woman and first American her age to run 100 meters in the Louisian Senior Olympic Games.

1940 — The Pittsburgh Steelers beat the Philadelphia Eagles 7-3 in a penalty free game at Forbes Field. Philadelphia’s George Somers hits a 36-yard field goal in the first quarter. Coley McDonough of the Steelers scores on a one-yard rush in the third quarter.

1945 — Top-ranked Army shuts out No. 2 Notre Dame 48-0 at Yankee Stadium. Glenn Davis scores three touchdowns and Doc Blanchard scores two, while the Cadets roll up 441 yards to the Irish’s 184.

1963 — Detroit’s Gordie Howe becomes the leading career goal scorer in the NHL with his 545th in a 3-0 victory over the Montreal Canadiens.

1974 — Hernri Richard and Gut Lafleur score two goals apiece to lead the Montreal Canadiens to an 11-1 over the Washington Capitals. Jack Egers gets the Capitals only goal.

1978 — Larry Holmes knocks out Alfredo Evangelista in the seventh round to retain the WBC heavyweight title in Las Vegas.

1984 — Wyoming’s Kevin Lowe rushes for 302 yards, and Rick Wegher of South Dakota State rushes for 231 to set an NCAA record for most yards gained by two opposing players. Wyoming wins 45-29.

1984 — Maryland completes the biggest comeback in NCAA history, overcoming a 31-0 halftime deficit to beating Miami 42-40 in the Orange Bowl. Led by back-up quarterback Frank Reich, the Terrapins score on six consecutive drives in the second half and stop Hurricane running back Melvin Bratton’s two-point conversion attempt on the goal line late in the fourth quarter.

2007 — San Jose center Jeremy Roenick scores his 500th NHL goal at the expense of his former team in a 4-1 win over Phoenix.

2007 — Notre Dame loses for the ninth time this season, a school-record, falling 41-24 to Air Force. The last time the Irish lost to two military academies in the same season was 1944.

2012 — Ka’Deem Carey of Arizona rushes for a Pac-12 record 366 yards and ties the conference record with five TDs in the Wildcats’ 56-31 rout of Colorado.

2013 — Marc Marquez becomes the first rookie in 35 years to win the MotoGP championship after protecting his points lead in the Valencia Grand Prix. Needing a top-four finish to secure the title, the 20-year-old Marquez finishes third on his Honda behind race winner and defending champion Jorge Lorenzo. The last rookie to win the title was American Kenny Roberts in 1978.

2017 — John Carlson and T.J. Oshie score rare home power-play goals, and Braden Holtby becomes the second-fastest goalie in NHL history to 200 victories in Washington’s 4-1 win over Pittsburgh. Holtby stops 27 of the 28 shots he faces to pick up victory No. 200 in his 319th game, second only to Hall of Famer and six-time Stanley Cup winner Ken Dryden, who did it in 311. 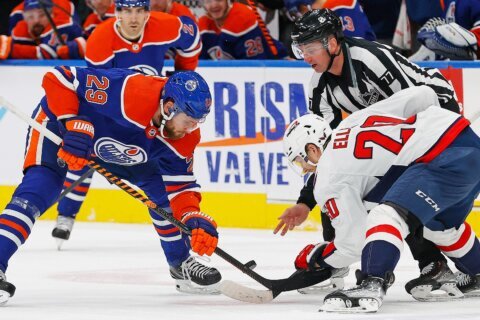 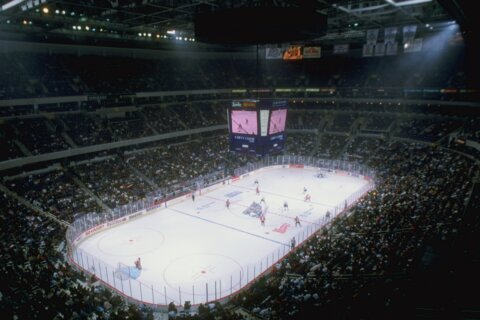