Jason Robertson redirected Nils Lundkvist’s hard shot from the high slot to open the scoring in the first period before Kiviranta’s hustle play gave the Stars some breathing room midway through the third.

It was the third goal for both Kiviranta and Robertson as the Stars bounced back from their first two regulation losses after starting 4-0-1 and are perfect in three home games.

“It was a great response from everyone coming off that road trip,” Robertson said. “As a whole, I thought we played a very solid game.”

Oettinger stopped Alex Ovechkin one-on-one after the Washington star’s steal in the Dallas zone in the second period.

The 23-year-old who had a breakout performance in a first-round playoff loss to Calgary last season turned away Nick Jensen on a good short-handed chance to protect a one-goal lead in the third.

Oettinger bounced back from his first loss, improved to 5-1 and dropped his goals-against average to 1.16 in his third career shutout.

“I think I can be one of the best goalies in this league, and it’s just now proving it every night,” Oettinger said. “The team hasn’t asked me to save the world or anything back there. Just do your job and make a few big saves every night.”

After Roope Hintz was called for interference, Kiviranta pursued a puck that Dallas cleared and was poking at John Carlson from behind when the Capitals defenseman and Evgeny Kuznetsov got crossed up.

Kiviranta stole the puck near the blue line, skated in alone and beat Darcy Kuemper with a backhand shot for a 2-0 lead. Kuemper had 25 saves.

Washington was shut out for the first time since last January against Vegas. The Capitals had the last of three power plays late in the third but couldn’t convert on three shot attempts.

“It was tight,” Capitals coach Peter Laviolette said. “I didn’t look at the third yet, but the chances were low both ways. There just wasn’t a lot of opportunity out there.”

Washington’s Dmitry Orlov wasn’t called for an elbow to Mason Marchment’s head in the second period.

Not long after, Marchment went to the penalty box for roughing at the same time Garnet Hathaway of the Capitals was penalized for slashing.

The subsequent 4-on-4 didn’t yield any great scoring chances, but the second period had its share, including Oettinger’s stop on Ovechkin.

“I think we knew that we had a starting goalie, but until you come out and do it every night, you always wonder if it’s real,” coach Pete DeBoer said. “But it’s real. He’s the real deal.”

Hintz, who also assisted on Robertson’s goal, and Lundkvist both misfired on passes from Robertson in transition in the second.

Capitals: At Nashville on Saturday. 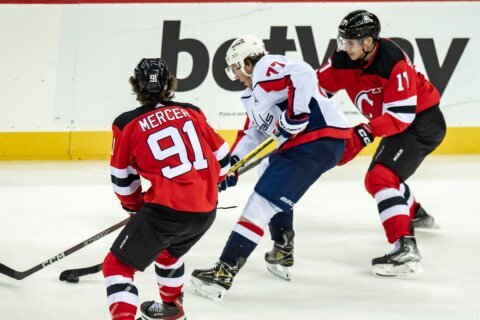 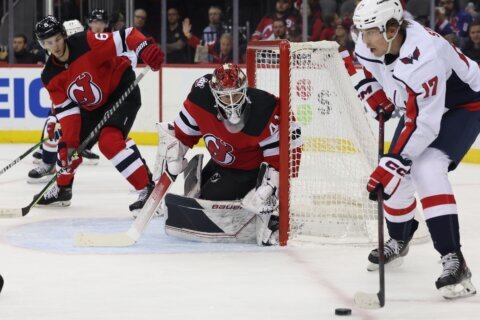