Aging Capitals think they can go on another long playoff run

Since winning the Stanley Cup in 2018, the Capitals have not won a playoff series and are now one of the oldest teams in the NHL.
Listen now to WTOP News WTOP.com | Alexa | Google Home | WTOP App | 103.5 FM

ARLINGTON, Va. (AP) — Look no further than the extra gray hair on Alex Ovechkin’s head for evidence he and the Washington Capitals are getting older.

The stress of the past few years has not helped. Since winning the Stanley Cup in 2018, the Capitals have not won a playoff series and are now one of the oldest teams in the NHL.

The talent has still been there to extend Washington’s postseason streak to six. Making it seven will take overcoming injuries to two top players for a team that still thinks it has what it takes to contend for a title.

“Yes, we haven’t gotten it done,” veteran center Lars Eller said. “But do I believe that we still have a run in us? Yes. I think we have all the assets. I can say that because I’ve seen us do it before.”

He also added Dylan Strome in free agency and Connor Brown via trade from Ottawa, two players who will be expected to fill big roles while center Nicklas Backstrom and top right winger Tom Wilson are out. Wilson is expected to miss at least the first two months of the season recovering from a torn ACL in his left knee, and Backstrom hopes to play at some point after undergoing surgery on his left hip.

It will take more than Strome and Brown — young center Connor McMichael has a big opportunity — to make up for not having Wilson and Backstrom for a while.

“You can’t just say that we’re going to put the next guy in and it’s going to go as smoothly,” No. 1 defenseman John Carlson said. “But we can all find different ways to chip in and change things and be better in different areas.”

Ovechkin and center Evgeny Kuznetsov helped carry the Capitals early last season when Backstrom was out, and they were atop the league standings as late as Jan. 2. Coming off a 50-goal season, Ovechkin’s ability to score better than any player of his generation means Washington can always go on a roll.

MacLellan is also realistic about where the Capitals are in hockey’s arc of winning and contending. They’re still in it but need things to go right to win it all again.

“There’s teams that have younger star players that are ahead of us, and then I think we’re with Pittsburgh and teams that are still good that could still pull it off,” he said.

Ovechkin is 21 goals from tying Gordie Howe on the NHL career list but is the first to halt any conversation about reaching that milestone.

What about scoring 50 again? A 10th 50-goal season would be an NHL record.

Kuemper isn’t just coming off backstopping the Colorado Avalanche to a title. He’s also one of the most consistent goalies in hockey over the past five years: Among players with at least 150 games played over that span, Kuemper ranks first with a .921 save percentage and second with a 2.43 goals-against average.

“He’s got size, he’s got a track record, he’s played on different types of teams, too: championship teams and non-playoff teams,” MacLellan said. “He’s got a wealth of experience that I think we’re all going to benefit from.”

Kuemper is also the unquestioned starter with Charlie Lindgren the backup. It’s a big change from young and unproven Vitek Vanecek and Ilya Samsonov splitting the duties.

“They performed well at times and they grew at different times in different ways, with ups and downs like it is with every young player,” Eller said. “They’re both still young goalies, but at the same time I understand why the team did what they did.”

Among those going into the final year of their contracts are Eller, Brown, wingers Conor Sheary and Garnet Hathaway, defensemen Dmitry Orlov, Nick Jensen and Trevor van Riemsdyk and coach Peter Laviolette. Many, especially Laviolette, are expected to be extended.

The Capitals will play in the franchise’s fifth outdoor game Feb. 18 when they visit the Carolina Hurricanes for the latest rendition of the NHL’s Stadium Series at N.C. State’s Carter-Finlay Stadium.

Eight players are left on the roster from the last time they played outside: at the Naval Academy in 2018 — three months before Washington won the Cup. 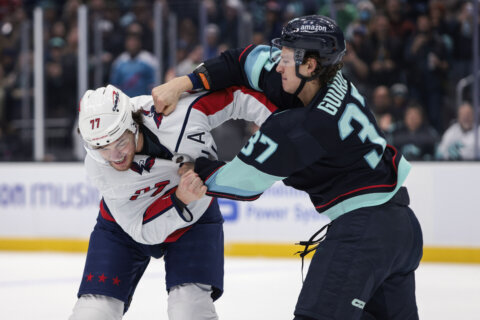 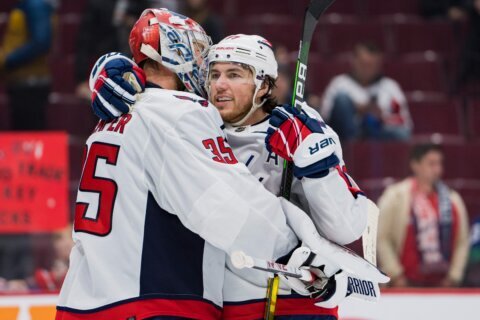 What we learned about the Capitals in November 2022 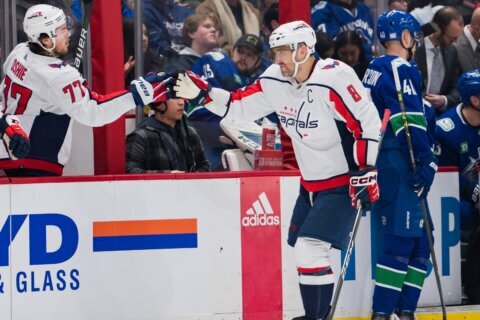