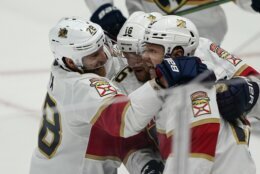 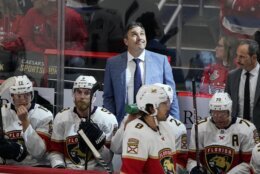 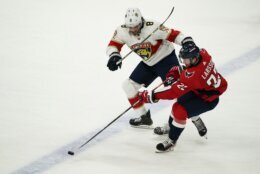 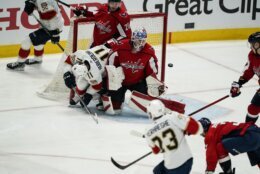 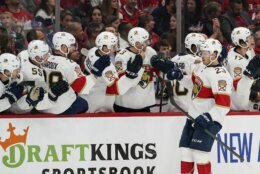 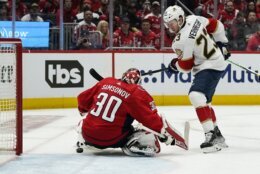 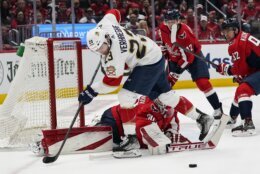 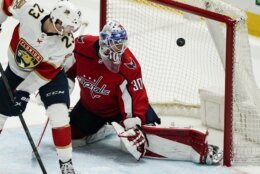 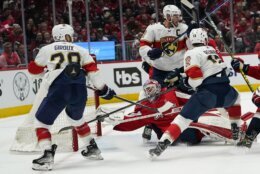 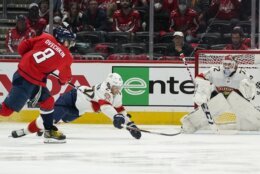 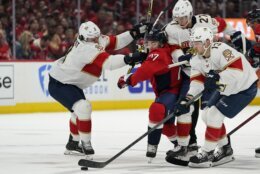 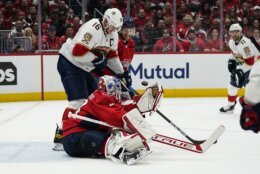 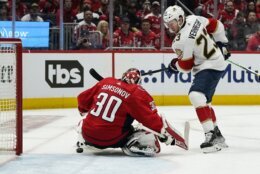 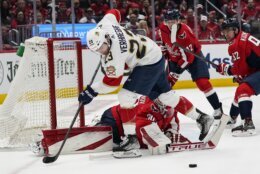 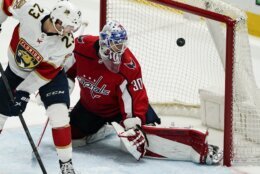 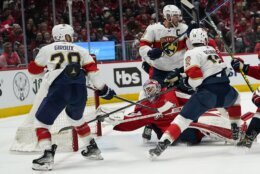 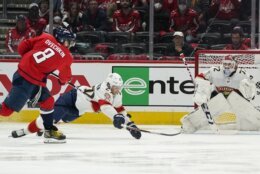 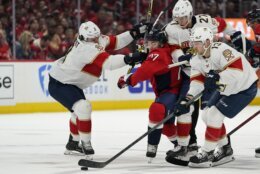 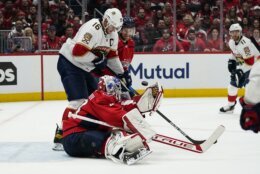 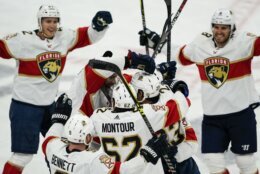 WASHINGTON (AP) — The “Comeback Cats” are back — in playoff form.

Known for their propensity to play from behind and win on the way to the NHL’s best regular season, the Florida Panthers finally delivered a little of that magic in the postseason, and not a minute too late.

No team had more comeback victories than Florida’s 24 this season, and now it has home-ice advantage back going into Game 5 on Wednesday night in Sunrise.

“I feel a lot of trust in them that they’ll make something happen,” interim coach Andew Brunette said. “They’ve done it all year and they continued to do it tonight.”

The Panthers were just over two minutes away from facing the prospect of getting knocked out at home. Then, with goaltender Sergei Bobrovsky pulled for an extra attacker, Reinhart collected a loose puck after it bounced off Capitals forward Garnet Hathaway and beat Ilya Samsonov with 2:04 remaining in the third period.

“Those are the kind of situations you want to be in as a hockey player,” Reinhart said. “It’s a game that can really go either way at the end of it and we stuck with it and we’re happy with the result.”

Brunette was happy he didn’t call Bobrovsky to the bench sooner. The two-time Vezina Trophy winner made a right pad save on Marcus Johansson with 3:24 left — 15 seconds before going off and a few shifts before Reinhart scored.

“It’s huge having him back there,” Reinhart said. “He’s been solid all series and gives us all the confidence in the world to make plays.”

Given the combination of nerves and playoff inexperience that contributed to Florida’s struggles in the series, Reinhart’s goal may turn out to be the one that saved its season. Verhaeghe’s second goal of the game 4:57 into OT gave the Panthers an extra shot of adrenaline for the flight home.

“We wanted to come in and have our best game of the series, and I think we did a pretty good job,” said Verhaeghe, who played eight games in the 2020 playoff bubble for the Tampa Bay Lightning when they won the first of consecutive Stanley Cup titles. “It’s just kind of a building block. We know we have another level to get to, and we’re a great team, so I think it’s just building some confidence.

The Panthers outshot the Capitals 32-16 and look to be finding their game even amid some trouble finishing. They went 0 for 4 on the power play to make it 0 for 13 in the series and couldn’t put the puck in the net at 5 on 5. Verhaeghe’s first goal came at 4 on 4.

Washington let a late lead slip away after going up 2-1 on Evgeny Kuznetsov’s goal with 10:29 left in regulation. T.J. Oshie scored a power-play goal in the first for the Capitals, who have not won consecutive playoff games sine 2019.

“At the end, it was bad bounces and it goes in,” captain Alex Ovechkin said. “It is going to be a tough, long series, so move on. Forget about it, move on.”

Holding on would have given the Capitals an opportunity to finish off the Panthers on Wednesday. Blowing the lead is a blow for a team already playing without right winger Tom Wilson and now needing to win at least once more on the road.

“In third period, it was everything in our hands,” Kuznetsov said. “We’re going to play best-of-three right now. There is no panic. Still pretty good chance.”

The Panthers feel the same way after clawing back in a series that has seen the teams trade wins. But they’re trying to stay even keel given the big expectations on them to make a run and the climb they had to make to tie things up.

NOTES: Brunette hopes the NHL’s department of player safety looks at Oshie’s hit on Sam Bennett right before Kuznetsov scored. “I didn’t like the hit,” he said. “I thought it was targeted to the head.” … The Panthers stuck with the same lineup from Games 1-3, but moved some players around at forward and on defense.