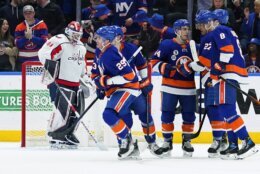 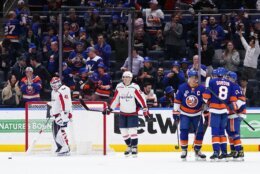 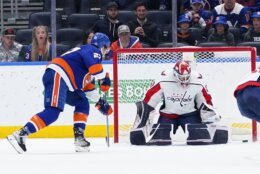 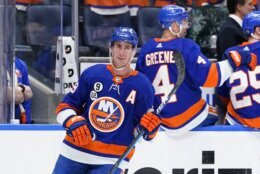 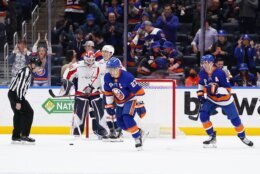 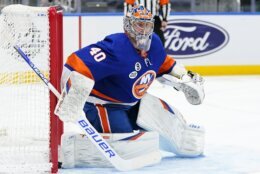 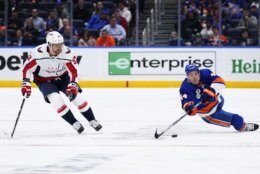 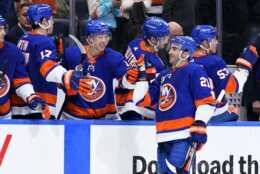 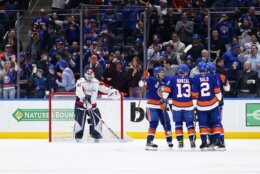 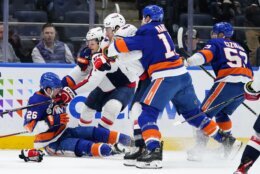 J.G. Pageau, Kyle Palmieri and Josh Bailey added third-period goals for the Islanders, who swept a home-and-home series with the playoff-bound Capitals this week and improved to 20-15-5 at home.

The Islanders are 16-10-2 in their last 28 games but will conclude a disappointing campaign without a postseason berth at home Friday against Tampa Bay, the defending Stanley-Cup champions who defeated them last June in the semifinals.

“I thought we came out with good intention. I thought we were skating and moving the puck really well,” Islanders coach Barry Trotz said. ”For the most part, I liked our energy. They had a push and they didn’t get much out of it … and we stood up for each other. Good win for us.”

Nelson opened the scoring with his team-leading 37th goal at 10:48 of the first period on the power play. Mathew Barzal and Noah Dobson assisted.

Lee made it 2-0 at 15:34 on the power play, tipping the puck past Washington goaltender Vitek Vanecek for his 28th goal. Barzal and Dobson each assisted again.

The goal was the 212th of Lee’s career, moving ahead of Derek King into tenth place in Islanders history. Lee also played his 595th game with the franchise, passing John Tonelli, who has 206 career goals. Lee, Tonelli and King have all worn No. 27 for the Islanders.

Dobson leads the defense with 37 assists and 50 points overall.

“Today was a perfect game for Noah, for me, because he let the game come to him,” Trotz said of the third-year defenseman. ”He was good on both sides of the puck and he still produced. And 50 points is valuable equity in today’s game because it’s so hard to score as it is … There’s been a lot of growth in a lot of areas.”

Pageau scored his 17th on a breakaway at 3:44 of the third just after the Islanders killed off a four-minute power-play for Washington when Adam Pelech was assessed two minor penalties for cross-checking on the same play.

Palmieri made it 4-0 at 6:23 with his 15th goal, also on a man advantage. Josh Bailey and Robin Salo assisted. The goal was the 200th of Palmieri’s career.

Varlamov’s shutout was ruined with 41.4 seconds left on a goal by Axel Jonsson-Fjallby, the second of the season for the 24-year-old rookie forward from Sweden.

Vanecek made 21 saves in defeat for the Capitals.

“Special teams didn’t go our way tonight. It seemed like we had a lot of good looks but we couldn’t get to the interior,” Capitals coach Peter Laviolette said. “They are a tight team defensively.”

The Islanders were coming off a 4-1 victory at Washington on Tuesday when Ryan Pulock and Dobson each scored power play goals as New York snapped a five-game winless streak. That win ended the Islanders’ road season at 17-19-5.

The Islanders are missing the playoffs for the first time since 2017-18, the year before Trotz became the team’s coach. After reaching the Eastern Conference Finals twice in a row, the current season was a letdown almost from the start.

After a 13-game season-beginning road trip, they went 0-5-2 in their initial seven games at the new UBS Arena starting in late November.

They then had to endure missing multiple players with COVID-19 on many nights during November and December. They will have played 33 games over the last two months of the season, making up postponed games in a condensed schedule.

“Just when you started feeling good we got shut down or Covid would hit. There wasn’t a defining moment that we could grab on to or hang on to and go on a run,” Trotz said. “And the second part of the season, the schedule was tough and immune systems are pretty well shot … But the core group does believe there is a good hockey team here.”

Washington remained one point behind Pittsburgh for third place in the Metropolitan Division with each team having one game remaining on Friday.

“We knew they would be working hard,” Capitals forward Anthony Mantha said. “We need to have a great game tomorrow and finish strong.”

The Islanders are ending their home season by facing five consecutive opponents (Florida, the Rangers, Carolina, Washington and Tampa Bay) who had at least 100 points when they played them. It is only the second time in NHL history that has happened – Montreal did this previously in 1971-72.

NOTES: The Capitals blanked the Islanders 2-0 on Jan. 15th in their previous meeting at UBS Arena … The Islanders are 3-2-1 in their last six home games against Washington … The Islanders scratched defenseman Ryan Pulock and forward Ross Johnston and continued to be without injured forward Cal Clutterbuck and defenseman Scott Mayfield … Capitals leading scorer Alexander Ovechkin did not dress … Washington also scratched defensemen Matt Irwin and Michal Kempny plus center Connor McMichael.

Capitals: Visit New York Rangers on Friday before starting the playoffs next week.