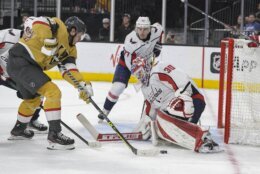 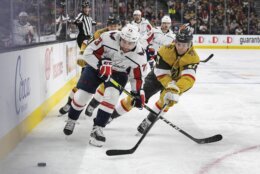 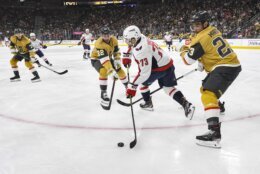 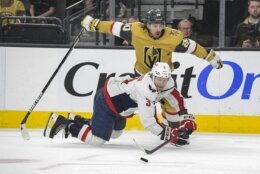 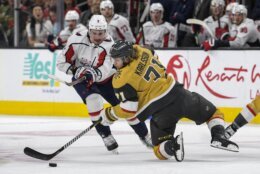 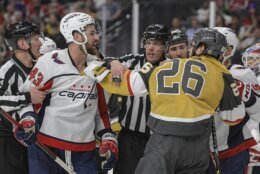 LAS VEGAS (AP) — Shea Theodore scored 2:09 into overtime to lift the Vegas Golden Knights to a 4-3 win over the Washington Capitals on Wednesday night.

“At this point of the season we need to win, we need to win out I think to give ourselves a chance,” said Theodore, who now has three game-winning goals in overtime this season. “Hopefully, that’s just a momentum boost on how we have to play in that third period going forward and give ourselves the best chance at making the postseason.”

The Knights, who ended a two-game slide that saw them score just two goals, have 89 points and are two back of Dallas for the second wild card in the Western Conference, and trail Los Angeles by three in the Pacific Division.

Alec Martinez, Evgenii Dadonov and Chandler Stephenson scored for the Golden Knights in regulation. Robin Lehner made 12 stops in the first period and didn’t return. Logan Thompson stopped 13 shots in the final two periods and didn’t face any in overtime.

“We pay him to start games like this, and it’s the most important time of the year,” Vegas coach Peter DeBoer said of his decision to start Lehner. “He’s healthy, he’s fresh, he’s got a lot of energy and we need him at this point of the year.”

But DeBoer said after Evgeny Kuznetsov tapped in his 24th goal of the season to give the Capitals a 1-0 lead just 6:18 into the game, he felt the Golden Knights looked rattled the rest of the period despite tying the game on Martinez’s goal and was looking to reset and spark his players for one of the most explosive offenses in the league.

“We have that next-man-up mentality, it’s a coach’s decision, he wants to shake things up and that’s what happened,” Theodore said. “I thought we came out and we played a little bit tighter as a unit. Our game had to evolve and that’s just the way it’s been. I thought L.T. when he went in, he played great and made a lot of huge saves for our group and helped us get that win.”

Alex Ovechkin added two goals for the Capitals, while Samsonov made 26 saves.

Washington squandered its chance to move ahead of third-place Pittsburgh in the Metropolitan Division. Both have 97 points with the Penguins holding the tiebreaker.

Vegas, playing in desperation mode and challenged by DeBoer’s risky move to pull Lehner, once again faced a quick deficit when Ovechkin wasted no time in introducing himself to Thompson when he one-timed Kuznetsov’s cross-ice pass and beat Vegas’ rookie netminder to put Washington back in front at 2:57.

Thompson regrouped to compose himself the rest of the period and stopped the next six shots that came his way.

With much more vigor than the first two periods, the Golden Knights came out flying for the third period and exactly one month removed from Vegas attempting to trade him at the deadline, Dadonov sparked the Golden Knights with a much-needed goal just 2:05 into the third when he skated down the right side and fired a shot that slipped under Samsonov’s arm and sent the announced crowd of 18,240 into a frenzy.

Less than a minute later, with Washington center Nic Dowd in the box for tripping, Stephenson — who won a Stanley Cup with the Capitals against Vegas in 2018 — put the Golden Knights ahead when he was positioned perfectly in the slot for the redirect, and ignited the crowd to the loudest its been all season.

“I thought we got some spark from Dadonov’s goal and then obviously the power-play goal lit the building up,” DeBoer said. “That was a huge momentum swing for us.”

Later in the period, Thompson showed tremendous resolve when he forced Ovechkin to mishandle the puck on a breakaway attempt that might rattle most rookies facing a guy chasing the all-time goal-scoring record and sitting on 779 career goals.

Nevertheless, Ovechkin got his 50th of the season and career No. 780 when he skated down the right side and blasted a shot Thompson had no chance to keep up with, tying the game at 3 with 6:24 left. It marked the ninth time in his career that Ovechkin scored 50 goals, tying Mike Bossy and Wayne Gretzky for most in NHL history. Ovechkin is also the oldest player in NHL history to score 50 in a season.

“Obviously it’s pretty good company,” Ovechkin said. ”Kind of, pretty happy. When you score the first one you feel pretty good about the game. … It was a fun game, yeah, tough loss but we’re gonna move on.”

Capitals: At Arizona on Friday.