Ovechkin injured as Capitals lose to Maple Leafs in shootout

Alex Ovechkin left the Washington Capitals’ game against the Toronto Maple Leafs on Sunday night after crashing hard into the boards and was ruled out with what the team called an upper-body injury.
Listen now to WTOP News WTOP.com | Alexa | Google Home | WTOP App | 103.5 FM
(1/15) 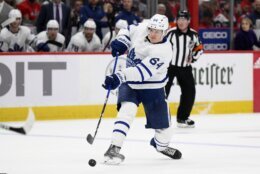 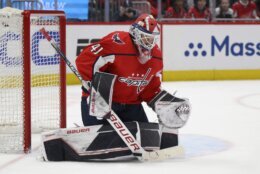 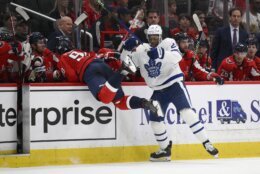 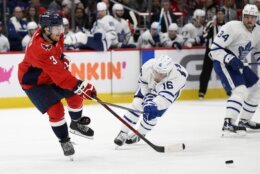 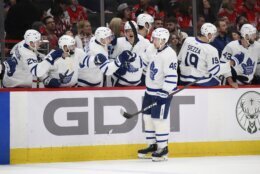 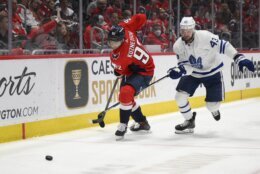 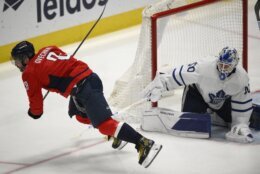 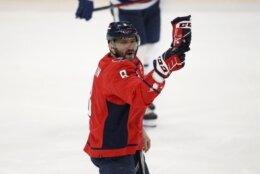 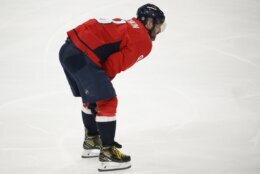 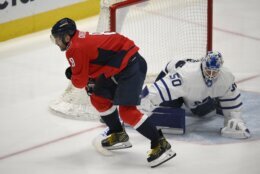 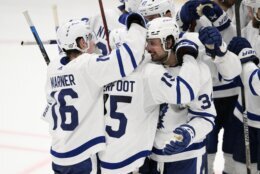 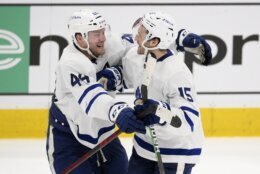 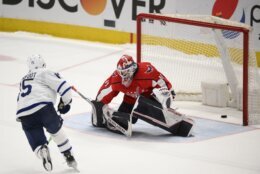 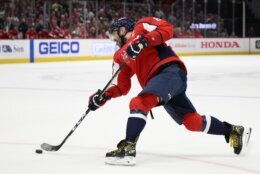 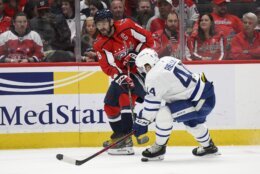 WASHINGTON (AP) — There’s much for the Washington Capitals to evaluate after a tough loss late in the season and an injury that could cloud their entire playoff outlook.

Alex Ovechkin was injured early in the third period of a 4-3 shootout loss to the Toronto Maple Leafs on Sunday night, crashing into the boards and getting ruled out with an upper-body injury. In the aftermath of that, his teammates built and blew a two-goal lead to miss a major opportunity to move up the standings.

Ovechkin’s uncertain status is the most alarming situation facing the Capitals with the playoffs beginning in just over a week.

Ovechkin tripped over Toronto goaltender Erik Kallgren’s stick after failing to score on a breakaway attempt. His left arm and shoulder made contact with the boards, and the 36-year-old remained on the ice for several seconds while the arena went silent.

“I think he skated into my stick and tripped on it, so, it was not my intention to trip him,” Kallgren said. “Obviously he was frustrated, but I didn’t I mean to trip him. I didn’t mean cause an injury, so I hope he’s fine.”

Before he could get medical attention, Ovechkin got to his feet and skated off the ice without his stick. He yelled at officials about no penalty being called on the play.

The consistently durable Russian superstar usually shakes off minor injuries and stays on the bench, as he did earlier in the night when he took a puck off his right shin. But Ovechkin went right down the tunnel this time and did not return.

“I’ve never met anyone tougher than that guy,” said Washington winger T.J. Oshie, who scored and had another would-be goal taken off the board by a coach’s challenge. “We all hope he’s fine. I just talked to him and I think he’ll be all right. It’s always scary seeing ‘Big 8’ go down and lay on the ice. He’s a tough guy. But if there was anyone I would imagine wouldn’t miss any more time than he needs to, it’d be ‘8.’”

The Capitals coughed up a two-goal lead they build not long after Ovechkin left the game in obvious pain. They left with just a point after Toronto’s Alex Kerfoot scored to end the seven-round shootout.

Washington had the chance to move into third place in the Metropolitan Division with three games left to play in the regular season after the rival Pittsburgh Penguins lost at Philadelphia earlier in the day. An unsuccessful power play in OT cost the Capitals after the Maple Leafs were called for too many men on the ice.

“It’s better it happened now than in a week, but it’s a frustrating loss,” said Marcus Johansson, who scored his third goal since rejoining the Capitals at the trade deadline. “I think we all wanted this one. We’ll learn from it and move on.”

Ilya Mikheyev scored in the third period to cut Toronto’s deficit in half, and Jason Spezza tied it with 57.3 seconds left. Kallgren won his first NHL shootout after making 34 saves in regulation and OT.

llya Lyubushkin also scored in the first period for the Maple Leafs, who inched closer to wrapping up home-ice advantage in the first round.

Toronto is set to open against either the back-to-back defending Stanley Cup champion Tampa Bay Lightning or the Boston Bruins. The Capitals could still face the Florida Panthers, Carolina Hurricanes or New York Rangers in the first round.

NOTES: Maple Leafs captain John Tavares and defenseman Timothy Liljegren got the night off for rest. … Defenseman Jake Muzzin missed a sixth consecutive game with an undisclosed injury. … Toronto rookie of the year candidate Michael Bunting was out after getting injured Saturday night at Florida. Coach Sheldon Keefe said Bunting woke up feeling better, but the team still did not have an expected time frame for the forward’s return.

Maple Leafs: Return home to face the Detroit Red Wings on Tuesday in their penultimate game of the regular season.

Capitals: Host the New York Islanders on Tuesday night in the first half of a home-and-home series with former coach Barry Trotz’s team.