Capitals lose 4-1 to Islanders, fail to move up in standings

Playing without injured captain Alex Ovechkin, the Washington Capitals missed an opportunity to move up in the standings with a 4-1 loss to the New York Islanders on Tuesday night.
Listen now to WTOP News WTOP.com | Alexa | Google Home | WTOP App | 103.5 FM
(1/10) 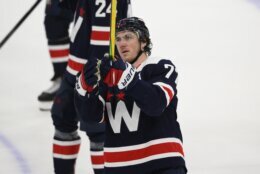 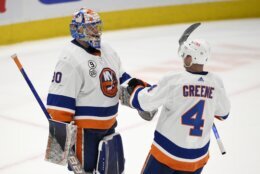 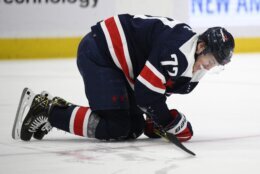 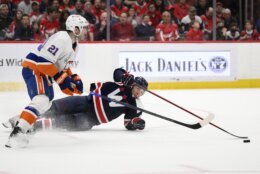 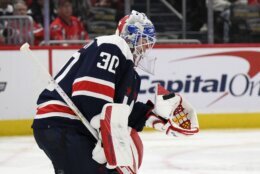 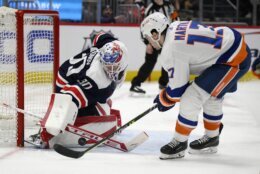 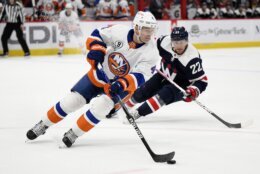 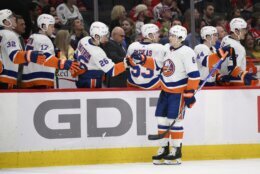 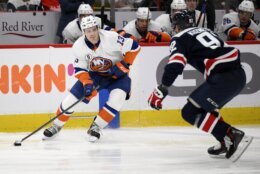 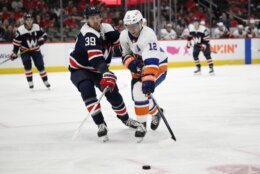 WASHINGTON (AP) — Peter Laviolette couldn’t explain why his Washington Capitals fell flat in a 4-1 loss to the New York Islanders on Tuesday night with a chance to move up in the standings and improve their playoff positioning.

Playing without injured captain Alex Ovechkin, the Capitals blew a lead and gave up four unanswered goals to an opponent that has long been out of playoff contention. They allowed power-play goals to Ryan Pulock and Noah Dobson, goaltender Ilya Samsonov botched a puck-handling attempt behind the net to help Casey Cizikas score short-handed and Tom Wilson turned the puck over to Anders Lee for New York’s fourth goal of the game.

“Guys were out of sync a little bit, couldn’t get much going,” winger Tom Wilson said. “Kind of an ugly game.”

Washington failed to pass rival Pittsburgh for third place in the Metropolitan Division after the Penguins lost at home to Edmonton, but the Caps still have two more chances before the end of the regular season.

Ilya Sorokin made 32 saves to help the Islanders snap a five-game losing streak near the end of what has turned into a lost season a year after reaching the East final. They played a forward short with 17 skaters instead of the usual 18 after Brock Nelson and Zdeno Chara were ruled out because of illness.

Nelson was in uniform and expected to play until he told coach Barry Trotz just before warmups he didn’t feel well enough.

“Our room is hacking and coughing and there’s a lot of guys sick and right now they’re battling through it,” Trotz said. “Give them a lot of credit. I thought it was a good character win.”

Ovechkin was deemed a game-time decision and is listed as day to day, but it was obvious earlier in the day he wasn’t a good bet to play with what the team is calling an upper-body injury. He slammed left shoulder first into the boards Sunday, and his status moving forward is uncertain.

The Capitals got some clarification on their first-round opponent: Carolina’s victory at the New York Rangers clinched the Metropolitan Division, and that combined with Boston beating Florida takes the Hurricanes out of the equation for Washington.

Washington is now set to open against the Rangers or Panthers, depending on how the final games of the season go.

The Capitals could have wrapped up third in the Metro when they play the Islanders again Thursday — had they won Tuesday. Now, it’ll come down to Friday to see whether Washington can avoid Eastern Conference-leading Florida and a more difficult path through the Atlantic Division side of the bracket.

“We can’t play like we did tonight,” Laviolette said. “This isn’t who we are. This isn’t our M.O. It’s one night, it was lousy and so that’s that.”

On the way to a second tough loss in a row, the Capitals got a bit of a scare when winger T.J. Oshie took a puck off his left foot and left the game briefly. Conor Sheary, who scored their only goal on a deflection in the first period, also went down late in the second blocking a shot but stayed in.

“He finished the game,” Laviolette said of Oshie. “He came back and played, and he seemed to be fine.”

The Capitals visit the Islanders at UBS Arena on Thursday night in the first half of a back-to-back set for each team to finish the season.