Conor Sheary scored in the first period and Vitek Vanecek got his fourth shutout of the season as the Washington Capitals beat the Arizona Coyotes 2-0 Friday night for their seventh win in nine games.
Listen now to WTOP News WTOP.com | Alexa | Google Home | WTOP App | 103.5 FM
(1/7) 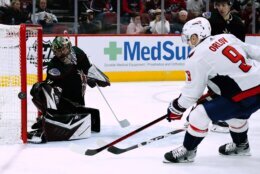 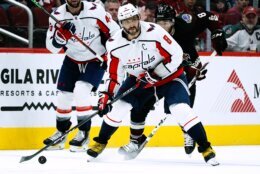 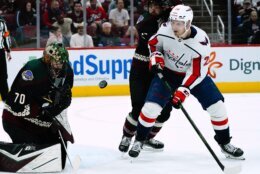 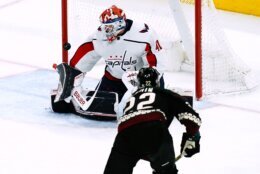 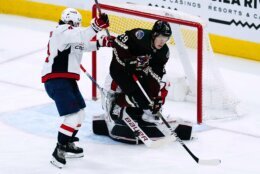 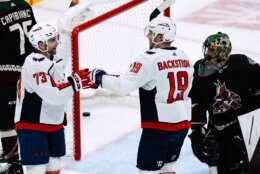 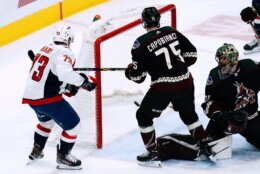 GLENDALE, Ariz. (AP) — Conor Sheary scored in the first period, John Carlson scored an empty-net goal and Vitek Vanecek picked up his fourth shutout of the season as the Washington Capitals beat the Arizona Coyotes 2-0 Friday night for their seventh win in nine games.

The Capitals, who completed a five-game western excursion with a 3-1-1 record, are an NHL-best 25-8-6 away from home this season. Washington pulled even with Pittsburgh for third in the Metropolitan Division with 99 points. Both teams have four games remaining in the regular season.

“I think our guys were muscling through tonight,” Capitals coach Peter Laviolette said. “Just the end of the road trip, 11 days, you’re getting into cities, everything’s off a little bit. I thought it was a gutsy effort to stay focused.”

Vanecek stopped 19 shots for his seventh career shutout and 20th victory of the season. He thwarted Coyotes chances, particularly early in the third period, to keep Washington ahead.

“It’s one thing when you’re in a rhythm, and then there’s not much going on,” Laviolette said. “He did a really good job with that tonight.”

Karel Vejmelka had 28 saves for the Coyotes, who have lost nine straight (0-8-1). Arizona was coming off an overtime loss to Chicago on Wednesday, its only point since an overtime win on the road against the Blackhawks on April 3.

Sheary’s goal, his 18th, came with 8:27 left in the first period. Sheary put in a rebound to Vejmelka’s right side. Nicklas Backstrom and Justin Schultz had the assists for Washington.

“I’ve been getting opportunities with injuries, and I think the puck’s been finding the net for me,” Sheary said. “To take seven points on a long road trip, it’s a good job by our guys.”

The Capitals outshot the Coyotes 29-19. There were four penalties in the contest, all against Arizona.

Jack McBain had the best chance for Arizona in the first period, but his point-blank shot against Vanecek hit the post to the goalie’s right. McBain, in his sixth career game, is looking for his first career goal.

A crowd of 14,023 — including a large contingent of Capitals fans — were in attendance at Gila River Arena. The Coyotes have two games left in Glendale before moving to a much smaller arena on Arizona State’s campus next season.

Alex Ovechkin had three shots in the game. The 36-year-old Capitals left wing scored his 50th goal on Wednesday, the 780th of his career. He trails only Wayne Gretzky (894) and Gordie Howe (801). Ovechkin matched Gretzky and Mike Bossy with his ninth season with 50 or more goals.

With 7:05 remaining in the second period, an apparent goal by Washington’s Garnet Hathaway — from behind the Coyotes’ net — was waved off due to the officials ruling that Hathaway controlled the puck with a high stick. The call was confirmed by replay.

Andrew Ladd was honored in a pregame ceremony for playing in his 1,000th game on Wednesday against Chicago. His family was present for the ceremony featuring longtime Coyotes captain Shane Doan and a video tribute with former and current teammates. Ladd got the start at left wing Friday night.

Bokondji Imama, meanwhile, made his NHL debut for the Coyotes. Imama, 25, from Montreal, saw 4 minutes of ice time in the first two periods and had one shot on goal. The Black defenseman had a racial gesture made toward him on Jan. 12 by a player in the AHL when he was playing for Tucson against San Jose. The player who made the gesture, Krystof Hrabik, was suspended for 30 games by the AHL.

“We all know it’s not an easy path,” Coyotes coach Andre Tourigny said of Imama. “Huge achievement for him. He was physical, vocal on the bench, had a great attitude.”

Coyotes C Jay Beagle was out for Friday after leaving Arizona’s previous game with a lower-body injury. … Nick Ritchie and Dyson Mayo missed their second straight games with upper-body injuries.