Alex Ovechkin tied the game late in the third period and scored the winner in a shootout as the Washington Capitals beat the Carolina Hurricanes 4-3 on Friday night.
Listen now to WTOP News WTOP.com | Alexa | Google Home | WTOP App | 103.5 FM
(1/8) 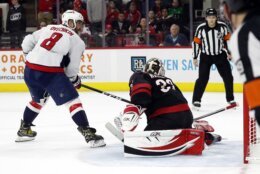 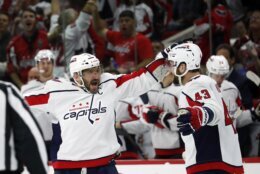 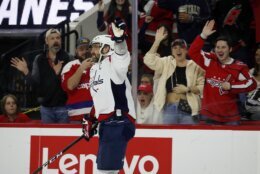 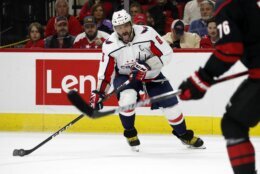 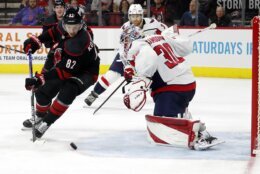 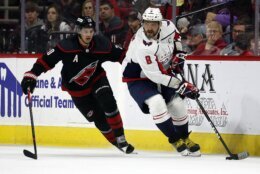 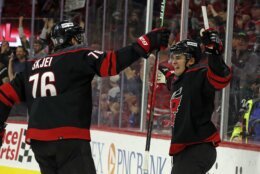 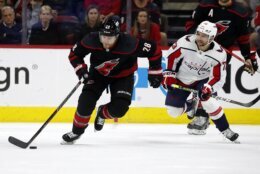 RALEIGH, N.C. (AP) — Alex Ovechkin tied the game late in the third period and scored the winner in a shootout as the Washington Capitals beat the Carolina Hurricanes 4-3 on Friday night.

Evgeny Kuznetsov and John Carlson also scored in regulation for Washington, which has an eight-game point streak to match its longest stretch of the season. Ilya Samsonov made 16 saves before denying all three Carolina tries in the tiebreaker.

Ovechkin was the last Washington shooter and put the puck past goalie Antti Raanta.

That’s the type of production the Capitals have come to expect from Ovechkin throughout his illustrious career.

“He wants it on his stick,” coach Peter Laviolette said. “He wants to be out there making a difference.”

Rookie center Seth Jarvis scored twice for his first multigoal game and Vincent Trocheck had the other goal for the Hurricanes, who have lost three in a row. Raanta stopped 37 shots.

The Hurricanes extended their home point streak to 14 games, one shy of the franchise record.

The Capitals outshot the Hurricanes 40-20, including 4-1 in overtime.

“I thought it was awesome, probably one of the best games we’ve played all year,” Laviolette said.

With both teams playing road games Thursday, it could have been a bit of a grind. But Laviolette said that knowing the Hurricanes would want a fast-paced game meant the Capitals had to arrive with a purpose.

“You have to play at that speed,” he said.

The Hurricanes had outshot their last six opponents. They never got rolling in this one.

“The mere fact that we were in position to win, we were pretty fortunate,” Carolina coach Rod Brind’Amour said. “We never got our game going at all. Give the other team credit. They got right to their game and stuck with it.”

Jarvis scored the first of three goals in the opening 11 minutes, ending his 18-game goal drought. He wasn’t in the lineup the previous three games.

Kuznetsov’s 21st of the season came from a tough angle for an unassisted goal at 7:32. Carlson put the Capitals on top 3:13 later.

The Hurricanes pulled even on Trocheck’s rapid-fire delivery from the slot after a Washington turnover.

The Capitals failed to clear the puck again late in the period, with the Hurricanes turning quick passing into Jarvis’ second goal with 12.4 seconds remaining. It was his 10th goal of the season.

Ovechkin tied it with 5:04 left in the third on a power play. Nicklas Backstrom won a faceoff, setting up Ovechkin for his 39th goal of the season.

“He doesn’t need much time and all he needs is one chance,” Hurricanes defenseman Brett Pesce said.

Ovechkin has scored in three consecutive games, including passing Jaromir Jagr for third place in NHL history with his 767th career goal earlier in the week.

Washington has handed Carolina three of its 20 losses this season, and the other two came in regulation.

Jarvis was back in the lineup in part because of an injury sustained by teammate Jordan Martinook late in the game a night earlier at Toronto. Martinook scored the winner in Carolina’s previous home game last Saturday against Philadelphia.

Jarvis said he didn’t dwell on his scoring drought.

“To get that one felt really nice,” he said. “Obviously, it’s in your head and you want to score. I try to not make it weigh on me.”

There are only 21 games left in the season and this marked the first time the Hurricanes lost in a shootout. However, it was just the second time they’ve been in that situation.

Every other team had been in at least two shootouts this season. Now the Edmonton Oilers at 3-0 and the Calgary Flames with a 2-0 shootout mark are the only teams without a loss in the tiebreaker.

Washington improved to 4-2 in shootouts.