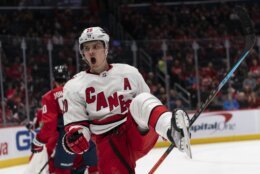 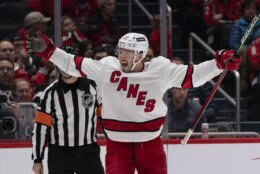 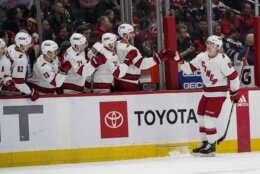 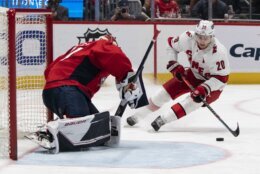 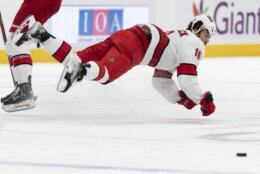 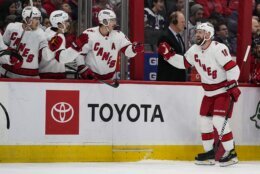 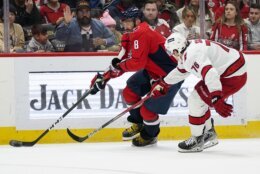 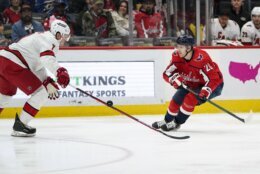 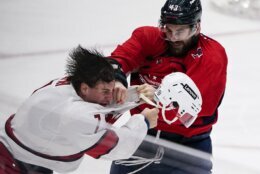 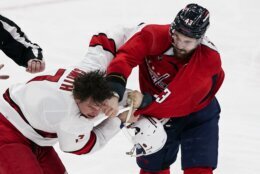 WASHINGTON (AP) — The Carolina Hurricanes gave the Washington Capitals something to think about if the division rivals meet in the playoffs, though it came at the cost of a potentially serious injury in the final seconds.

Martin Necas scored twice, Sebastian Aho added his 29th goal and the Hurricanes routed the Capitals 6-1 on Monday night in a potential first-round preview. Carolina center Jesperi Kotkaniemi put no weight on his left leg after getting injured on a penalized hit by Lars Eller with 1.8 seconds left, and his uncertain status overshadowed a big victory.

“I don’t know the extent, but it’s not good,” coach Rod Brind’Amour said during a somber postgame news conference. “He’s injured. I don’t know how bad, but he’s definitely going to be out. The game was over. Let’s just get it over with. Two seconds left. I don’t like it. But nothing you can do about it.”

Kotkaniemi’s injury could linger long after a game that should have been remembered for Carolina’s domination and a heavyweight fight between teammate Brendan Smith and Washington’s Tom Wilson.

Tensions had been simmering between them since Wilson rocked Vincent Trocheck with a big shoulder-to-chest hit at center ice in the second period, and he wanted to fight Smith early in the third before officials intervened. Wilson and Smith finally dropped the gloves midway through the third, with each landing multiple punches in a bout that fired up a crowd that had been dormant much of the game.

“It’s two tough dudes going at it,” said Hurricanes forward Max Domi, who had two assists. “I have so much respect for Smitty, obviously for doing something like that. He certainly doesn’t have to, but it’s a part of the league. He’s a big part of the win.”

If the fireworks were a sign of things to come, a Hurricanes-Capitals playoff series would be must-see entertainment. This result moved that one step closer to reality.

Carolina, which leads the Metropolitan Division, moved one point ahead of Florida in the back-and-forth race for the top seed in the Eastern Conference, which would likely mean a series against the Capitals instead of Boston, Toronto or two-time defending Stanley Cup champion Tampa Bay.

After losing to the Capitals in a shootout at home 10 days ago and less than a month since getting blown out of this building, the Hurricanes made plenty of statements to show they wouldn’t be at a disadvantage if the teams face off in early May.

That began well before puck drop with Brind’Amour starting No. 1 goaltender Frederik Andersen over backup Antti Raanta despite a visit to the Lightning looming Tuesday in the second half of a back-to-back. Andersen stopped 25 of the 26 shots he faced, with most of the pressure coming in the first half of the second period when the Capitals tilted the ice toward him.

Much of the rest of the game was all Carolina, perhaps a product of the opposite scheduling for Washington: no game until Sunday and the next two days completely off.

“We don’t really get to decide,” forward Garnet Hathaway said of the break. “We’re going to make the most of it right now. It’s one that, I think you could look at this game and really want to get back in the rink and turn things around.”

The Capitals had a burst of energy after the first intermission that culminated in Wilson’s goal and cut their deficit to one, but the quick-strike Hurricanes answered less than two minutes later with Aho’s short-handed goal and left no doubt about the result.

“That’s the big goal of the game,” Brind’Amour said. “That’s probably the turning point of the game.”

Veteran forward Derek Stepan and defensemen Brett Pesce and Brady Skjei also scored for the Hurricanes, who won for the second time in three games and extended their point streak to four. Washington’s Vitek Vanecek, who was pulled to start the third after allowing five goals on 23 shots, gave up some bad rebounds but was hardly to blame for his teammates’ messy play in the defensive zone and carelessness with the puck.

“Tonight didn’t go our way,” coach Peter Laviolette said. “It’s hard to paint the month with a brush tonight and say it wasn’t good, or it wasn’t consistent. There was a lot of good things that we did. Certainly, you leave tonight and everybody’s got a bad taste in their mouth.”

The Hurricanes also left Washington with a bad taste because of Kotkaniemi’s injury from Eller’s hit just before the final horn and long after the outcome had been determined.

“For me, that’s just so stupid,” Necas said. “I don’t know even who hit him, but whoever it was, it’s a 6-1 game, one second left and does that. He tries to be a hero or whatever. I don’t know. I have no words for that. It’s just ridiculous.”

Hurricanes: Raanta is expected to start in goal in the road-trip finale Tuesday night at Tampa Bay.

Capitals: Host the Minnesota Wild on Sunday night after their extended break.