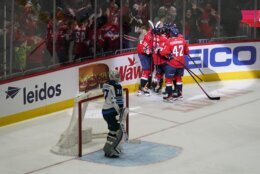 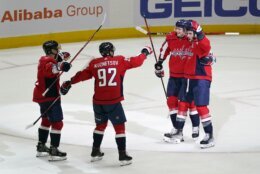 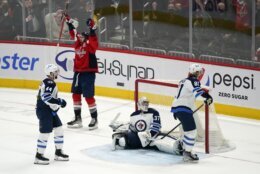 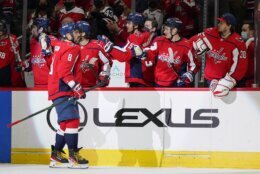 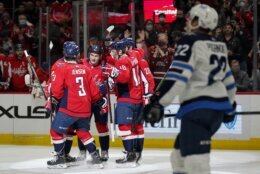 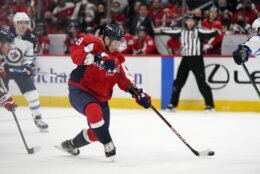 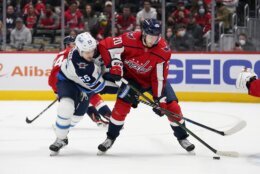 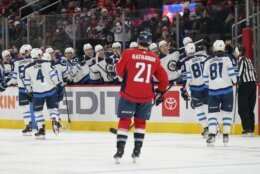 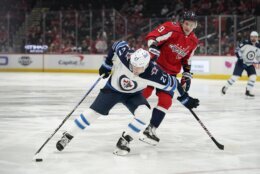 WASHINGTON (AP) — Alex Ovechkin fumed after he thought the referees missed a penalty call and screamed obscenities from the bench after watching the replay.

On his very next shift, he scored his NHL-leading 27th goal of the season to spark a comeback and help the Washington Capitals beat the Winnipeg Jets 4-3 in overtime Tuesday night. It took a power move from Evgeny Kuznetsov to set up Tom Wilson’s winner and give the Capitals their first 3-on-3 OT win of the season, but of course, their longtime captain and MVP candidate at age 36 was responsible for getting the rally going.

“He comes to play every night, and we can always rely on him,” defenseman Justin Schultz said. “He goes out there and does everything he can to help us, and you knew we didn’t get off to a great start. That goal he scored was huge for us.”

Ovechkin’s anger started when the Capitals fell behind by two goals less than three minutes in. He became livid after no penalty was called on Jets defenseman Josh Morrissey for hooking him and let the officials know about it.

The Russian superstar scored on his next shot, firing the puck past 2020 Vezina Trophy-winning goaltender Connor Hellebuyck on a 2-on-1 rush. With the goal, Ovechkin broke a tie atop the NHL with Edmonton’s Leon Draisaitl.

Ovechkin’s 757th goal was also his 1,375th point, putting him ahead of Mike Modano for 24th on the career scoring list.

Dmitry Orlov tied it in the second, and rookie Aliaksei Protas put the Capitals ahead in the third with a wraparound goal, banking the puck off former Washington defenseman Nate Schmidt and Hellebuyck and in. Pierre-Luc Dubois tied it for the Jets with 1:05 left, and Wilson scored 26 seconds into overtime.

The Capitals had lost their previous seven games decided in OT.

“It is something we were trying to fix and work on, and it is nice when you get the first one,” Wilson said. “Hopefully we can turn it around.”

Starter Vitek Vanecek was stellar after the rough start that was more an indictment of the play in front of him than him in net. He stopped Andrew Copp on a breakaway later in the first period and made three saves on point-blank chances on a Capitals penalty kill late in the second with the score tied at 2.

Vanecek finished with 30 saves on 33 shots after allowing two goals on the first four attempts put on net.

“He bailed us out,” coach Peter Laviolette said. “I thought that he battled hard tonight and did a good job for us.”

Kyle Connor scored 62 seconds in on the power play, and Cole Perfetti followed not long after with his first NHL goal on a 2-on-1 rush. Connor and Perfetti scoring twice in the first 2:20 is the third-fastest two-goal start in Jets/Atlanta Thrashers franchise history.

No one has scored more against the Jets/Thrashers than Ovechkin, who now has 50 goals and 49 assists in 69 games against them. He became the second player in NHL history to score 50 or more goals against a franchise that debuted after 1979, joining Hall of Famer Teemu Selanne, who did so against the San Jose Sharks.

While the Capitals won for just the second time in seven games, the Jets have lost four of five. Washington extended its home winning streak against Winnipeg to nine, dating to April 13, 2013 when the teams played in the Southeast Division.

“We did a lot of things right, but look at the team that you’re playing,” Jets interim coach Dave Lowry said. “They’ve got a bunch of world-class All-Stars on their team and they’re not going to go away. They got their legs under them. They took the game over.”

NOTES: Winnipeg’s Nikolai Ehlers was injured late in regulation after a knee-on-knee hit from Orlov. Lowry said Ehlers would miss at least one game. … The Capitals were without top defenseman John Carlson and winger Conor Sheary (COVID-19 protocol) and forward T.J. Oshie (upper-body injury) for a second consecutive game. … Assistant coach Scott Arniel was not behind the bench after going into protocol. … Jets captain Blake Wheeler took part in the team’s morning skate and appears to be nearing a return. Wheeler has not played since Dec. 10 because of a lower-body injury.