Alex Ovechkin scored his 28th and 29th goals of the season in the third period, Nicklas Backstrom pounced on a turnover to get the winner 1:13 into overtime and the Washington Capitals rallied for a 3-2 victory over the Ottawa Senators on Saturday night.
Listen now to WTOP News WTOP.com | Alexa | Google Home | WTOP App | 103.5 FM
(1/8) 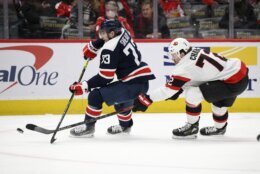 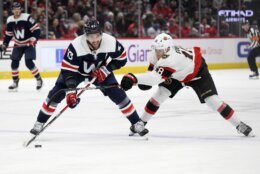 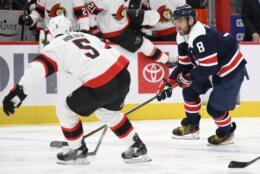 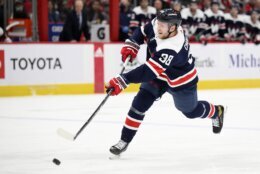 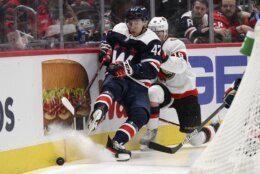 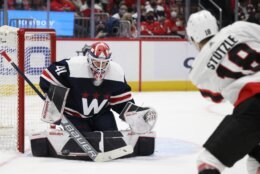 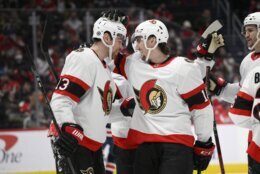 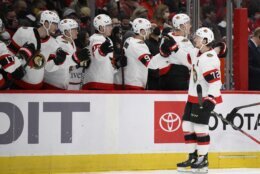 WASHINGTON (AP) — Alex Ovechkin scored his 28th and 29th goals of the season in the third period, Nicklas Backstrom pounced on a turnover to get the winner 1:13 into overtime and the Washington Capitals rallied for a 3-2 victory over the Ottawa Senators on Saturday night.

Backstrom also assisted on Ovechkin’s second goal, which tied Chris Kreider of the New York Rangers for the NHL lead.

Backstrom then took the puck off a Senators defender deep in Ottawa’s zone and beat goaltender Matt Murray with a breakaway backhand to give Washington just its third win in nine games.

“This month hasn’t gone our way, and that’s OK,” said Washington coach Peter Laviolette, whose team remains fourth in a tight race atop the Metropolitan Division. “It’s OK to grind and embrace that a little bit, that you have to work for something or you have to dig out of a hole as a group. And you’ve got to figure out how to do it. There’s nothing wrong with that. And tonight was a perfect example, right?”

Vitek Vanecek made 20 stops for the Capitals, who trailed 2-0 after two.

Thomas Chabot opened the scoring for Ottawa on the first shot of the game and Zach Sanford added a goal early in the second period.

Murray made 30 saves but couldn’t prevent the Senators’ third straight loss overall and ninth in a row at Washington dating to December 2014.

“Give them credit,” Ottawa coach D.J. Smith said. “But at the same time, we left Ovechkin open in the slot twice, and he isn’t going to miss those.”

Ovechkin cut the deficit in half early in the final period when he wedged between Ottawa’s Dylan Gambrell and Jacob Bernard-Docker near the crease and fired a one-timer off a pass from Trevor Van Riemsdyk into the roof of the net.

Ovechkin did the same with Backstrom’s pass about midway through the third with a shot so firm it struck the inside bar and bounced out. Play briefly continued before the goal was given via video review.

“We just tried to be patient,” Ovechkin said. “Obviously, it’s not fun when you play two periods without a goal. … You have to grind it out. You have to work hard and make a push. And that’s what we did.”

Senators: Nine-game losing streak in Washington was extended two days after taking a 10th consecutive defeat in Pittsburgh. … Finished with 22 shots on goal after surpassing 40 in their previous two games.

Ovechkin began the day as the NHL goals leader, but Kreider had a hat trick against Arizona to tie him. The 36-year-old Ovechkin also entered leading the race for the Art Ross Trophy with 56 points, and now has 58. He’s chasing the 10th goals crown and second points title of his career.