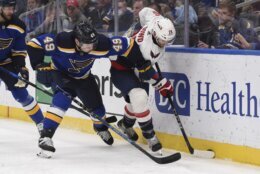 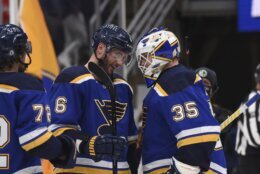 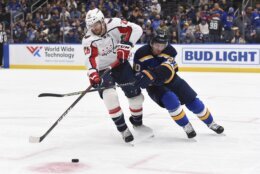 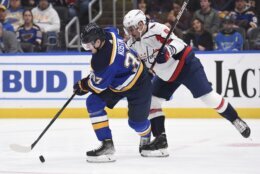 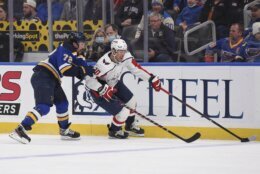 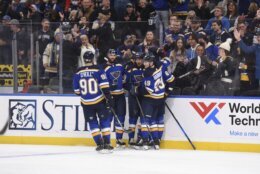 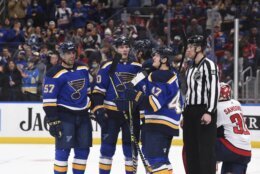 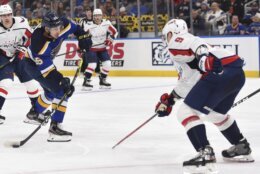 Torey Krug, Oskar Sundqvist and Ivan Barbashev also scored to help the Blues improve to 8-2-2 in their last 12 games, and 10-0-1 in their last 11 at home. Ryan O’Reilly and Robert Thomas each added two assists.

‘“Well, I think we score quite a bit here at home,” said St. Louis coach Craig Berube about the Blues’ success at home. “I think that’s the No. 1 thing that sticks out in my mind.”

Husso hadn’t played since Dec. 7 when got hurt.

“Sometimes it’s hard to come (back) when you don’t play for a month,” Husso said. “It was a good hockey game for us and a big win.”

Berube liked what he saw from Husso.

“He was ready to go. Healed up and he’s had a bunch of practice time,” Berubke said. “He’s played well for us this year, again tonight. Just wins games.”

Daniel Sprong scored for Washington, which lost in regulation for the third time in its last 12 games (6-3-3).

Ilya Samsonov gave up four goals on 16 shots through two periods, and Zach Fucale stopped all seven shots he faced in the third.

“The game just hadn’t gone the way we wanted,” Washington coach Peter Laviolette said. “At that point, we’re looking to make a change and get Fucale back in the net and give him some time.”

Buchnevich, Sundqvist and Barbashev scored in the second period to give St. Louis a 4-1 lead. The scoring burst came on just six shots on goal in the period against Samsonov — who has allowed three or more goals in six of his eight starts since the beginning of December.

Buchnevich put St. Louis ahead 2-1 with a one-timer from the top of the slot at 9:08. It was the first shot on goal in the period by the Blues, who earlier had a power-play chance. Sundqvist popped in a rebound of a shot by Justin Faulk with 2:40 remaining, and Barbashev’s goal on a quick wrist shot from the slot came just before just before time ran out and the horn sounded in the period.

Buchnevich added his 13th of the season, an empty-netter with 3:52 left in the third.

Washington took the lead 2:02 into the game as Sprong snapped a wrist shot from the right circle after getting a pass from along the boards by Aliaksei Protas.

“You know, Protas made a good play to the middle and I know I don’t need much time to get it off and I found the corner,” Sprong said.

St. Louis tied it 1-1 when Krug scored with 7:50 left in the period. Krug received a nifty cross-ice pass from Thomas in the left faceoff circle and he lifted a wrist shot high for the goal.

“I think Krug’s goal really got us settled in, to be honest with you,” Berube said. “Then we started to just do what we needed to do against them.”

Husso was strong in the first period for the Blues. He foiled a Capitals 3-on-1 break with a left skate kick save at 1:53. Washington had numerous scoring chances in the first 10 minutes, including one by Alex Ovechkin just 32 seconds into the game, but managed just the one goal.

“Those are the kind of lucky saves,” said Husso, who is 6-0 in his last seven home appearances with .953 save percentage. “It gives you a good feeling. Those are the saves that when you make them and you’re dialed right into the game.”

The Capitals didn’t get a shot on goal in the final 10:22 of the period.

Washington had been idle since a 4-3 overtime loss at home to the New Jersey Devils last Sunday. Washington was set to play Tuesday at Montreal but received an extended layoff due to the game being postponed for COVID-19 restrictions.

Blues RW Vladimir Tarasenko, D Scott Perunovich and FJake Walman were added to the NHL’s COVID-19 protocols list. Tarasenko, who missed his first game of the season, had six goals and five assists in his last 11 games. The Blues have had 17 players on the COVID-19 protocols this season. … Washington D Martin Fehervary and D Dennis Cholowski were back on the active roster and out of COVID-19 protocols.

Capitals: At Minnesota on Saturday night. 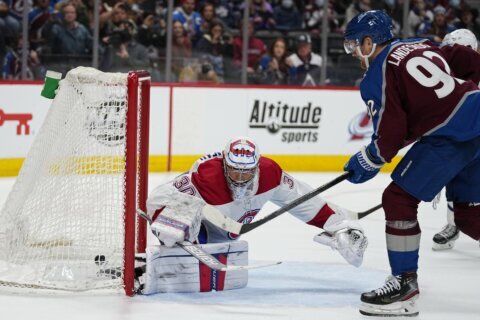 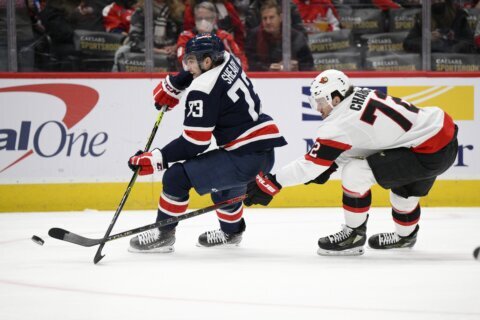 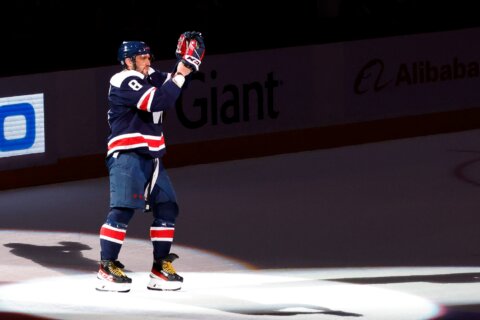