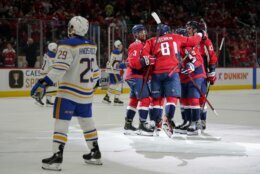 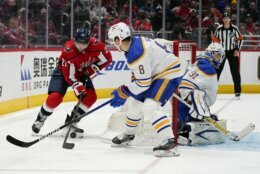 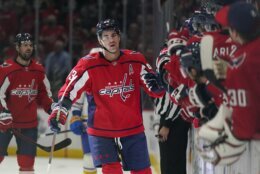 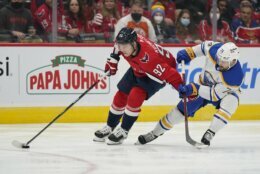 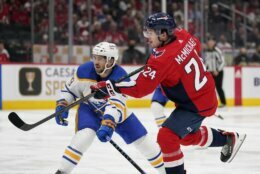 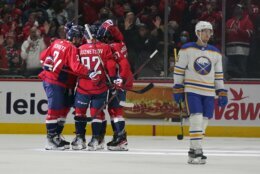 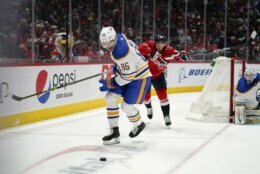 “I just take it day by day,” said the 36-year-old Ovechkin, who has 11 goals this season after entering Monday tied for the league lead. “You know it’s nice to be in that company. It’s pretty big numbers, so just move on. Obviously, it’s nice to be tied but I still have a couple games left.”

“The last couple games we wanted to be better,” Wilson said of his line that includes Kuznetsov and Ovechkin. “I think we really needed to step up tonight and lead by example and drive the bus a little bit.”

Ovechkin also assisted on two goals, including Wilson’s first that gave Washington an early lead it never relinquished. Connor McMichael and John Carlson also scored, and Vitek Vanecek made 25 saves for the Capitals.

Cody Eakin, Anders Bjork and Colin Miller scored for the Sabres, who suffered a fifth consecutive defeat, with four of those coming in regulation. Dustin Tokarski had 25 saves.

“I liked the fight all the way through to the end,” said Sabres coach Don Granato, whose team twice cut two-goal deficits in half. “I think there were opportunities in the game that were created and generated and it’s the way we need to play. We need to play aggressive.”

Ovechkin broke through when he redirected Dmitry Orlov’s shot into the top left corner nearly midway through the second period. That gave Washington a 3-1 lead that stood until Bjork scored early in the third period.

But Wilson completed his first multi-goal game since March less than three minutes later, taking a feed from Kuznetsov and finishing between Tokarski’s pads to make it 4-2.

Carlson added his goal with just over two minutes remaining, before Miller had the Sabres’ consolation tally.

Ovechkin is on pace to pass third-place Jaromir Jagr’s 766 goals before the end of the season. Wayne Gretsky holds the all-time record with 894 goals, followed by Gordie Howe with 801.

“Let’s don’t jump ahead,” Ovechkin said of chasing down Jagr. “We have to (pass Hull) first and then we’re going to talk about it.”

Ovechkin nearly got his history-making goal in the first period when he redirected Trevor Van Riemsdyk’s shot from the point. But it caught a piece of Wilson’s arm on its way past Tokarski, so Ovechkin received the assist.

The actual goal came on a similar play, on a lesser-known skill than his powerful shot.

“There’s going to be times when we need people in front of the net, and he does go there,” Capitals coach Peter Laviolette said of Ovechkin.