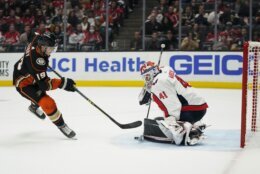 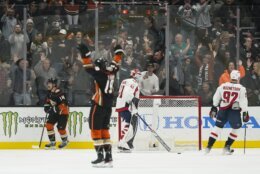 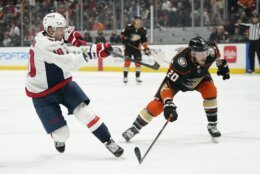 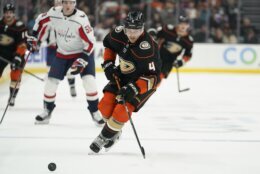 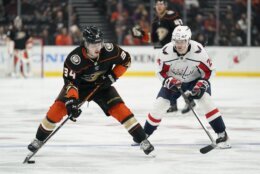 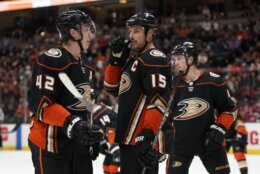 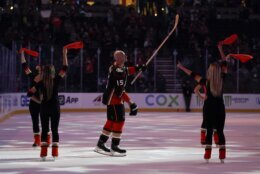 ANAHEIM, Calif. (AP) — For a franchise that came into the league owned by the Walt Disney Company, everything magically went according to script for the Anaheim Ducks Tuesday night.

On a night when team captain Ryan Getzlaf reached 1,000 points, Trevor Zegras’ overtime goal helped the Ducks extend their winning streak to eight — and notch the 1,000th franchise win — with a 3-2 victory over the Washington Capitals.

“I found out earlier today that we were on the same number, so it was cool that we got to talk about it tonight,” said Getzlaf, who is the seventh active player to reach 1,000 points.

Troy Terry extended his point streak to 15 games for the Ducks, who remain unbeaten in November and have won six straight at home dating back to Oct. 31. John Gibson stopped 28 shots for the Ducks.

It’s the second straight game Zegras has had two goals. His overtime-winner with 46 seconds left came on a wrist shot to beat Washington goaltender Vitek Vanecek.

“It was kind of just a perfect story, right? A thousand points, a thousand wins for the franchise, a game in overtime against a really good hockey team over there,” said Zegras, who became the second player in franchise history to score consecutive game-winning goals before turning 21. “Obviously giving up that goal late here, a little rattled, but I think everybody rallied for that overtime. It was nice to get the win.”

The win also put the Ducks atop the Pacific Division with 23 points after Edmonton lost to Winnipeg. For a franchise that is still in a rebuilding mode, the Ducks have become one of the surprise teams through the first two months of the season.

“I think we should feel good about it, but, I go back to what we’ve been preaching here the whole time,” coach Dallas Eakins said. “If we can come in every day, and I know I sound like a broken record, and just simply win the day, then all of those things will just look after itself.”

Garrett Pilon and Tom Wilson scored and Vanecek made 28 saves for the Capitals, whose four-game winning streak was snapped. John Carlson and Martin Fehervary had two assists apiece.

Getzlaf and Terry each had an assist on Cam Fowler’s goal early in the first period. Getzlaf became the 92nd player in NHL history to reach 1,000 points with the primary assist.

Meanwhile, Terry is tied with Edmonton’s Connor McDavid for the NHL’s longest point streak. No other player has recorded a streak of more than nine games. Terry’s streak is also tied with Getzlaf for the third-longest in franchise history. Corey Perry has the record at 19 games, which was accomplished in 2009.

Fowler took Getzlaf’s cross-ice pass that deflected off the boards and ripped a slap shot past Vanecek at 3:32 of the first period for his third goal of the season.

Pilon scored his first NHL goal to tie it at 1 in the third period. Anaheim regained the lead midway through the period when Sonny Milano flipped a pass to Zegras, who put a wrist shot between Vanecek’s legs.

Wilson sent it into overtime with 2 1/2 minutes left in the third, when he deflected John Carlson’s shot from the point into the net. It was Wilson’s fifth goal in the last seven games.

“I mean the loss is tough. First period wasn’t great, second period was similar, and I thought the third period was really good,” Washington coach Peter Laviolette said. “I thought we got it down in the offensive zone and generated a lot of offense, ended up getting it into overtime. And then we didn’t score. It’s just frustrating.”

Pilon became the fifth Capitals rookie this season to score his first career goal on a tip-in 5:36 into the third period. Pilon was called up after forward Lars Eller was placed on the NHL’s COVID-19 list prior to the game.

Nick Jensen originally appeared to tie it in the first period, but the goal was overturned when instant replay ruled Garnet Hathaway was offside.

The 19th overall pick by the Ducks in the 2003 NHL draft, Getzlaf is the 39th player in league history to record his first 1,000 points all with the same club and the 45th to get at least 1,000 points with a single franchise.

Getzlaf has had two major milestones this season, the first coming Oct. 31, when he became the franchise career points leader with a game-winning goal against Montreal. He passed Selanne, who had 988 points in two stints and 15 seasons.

Getzlaf, who has 280 goals and 720 assists in 17 seasons, has a point in four straight games. He is third in the league with 17 assists and tied for ninth in scoring with 18 points.