Evgeny Kuznetsov scored his seventh goal and added an assist, Alex Ovechkin had three assists in a game for the first time in nearly four years, and the Washington Capitals cruised to a 6-3 win over the Montreal Canadiens on Wednesday night.
Listen now to WTOP News WTOP.com | Alexa | Google Home | WTOP App | 103.5 FM
(1/5) 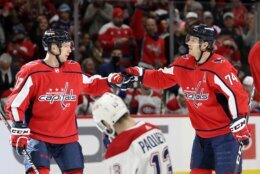 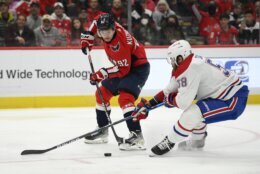 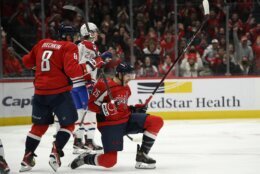 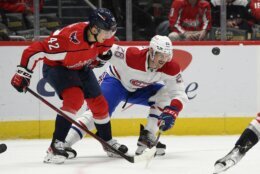 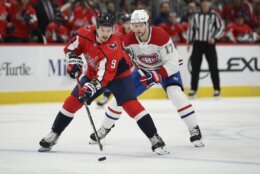 WASHINGTON (AP) — Evgeny Kuznetsov scored his seventh goal and added an assist, Alex Ovechkin had three assists in a game for the first time in nearly four years, and the Washington Capitals cruised to a 6-3 win over the Montreal Canadiens on Wednesday night.

Dmitry Orlov, John Carlson and Nic Dowd also had a goal and an assist each as Washington won its seventh out of nine in its return from a four-game West Coast trip.

“Coming off the road trip … I thought the game was good and the first period was excellent,” Washington coach Peter Laviolette said.

Michael Sgarbossa scored his first career goal for the Capitals to help them to a 3-0 lead. Tom Wilson completed Ovechkin’s three-assist night when he scored on a one-timer of his feed.

Ilya Samsonov made 25 saves while winning his seventh game in eight starts, despite seeing his shutout streak snapped at 170 minutes, 13 seconds.

Artturi Lehkonen and Jake Evans each had a goal and an assist for Montreal, which lost its fifth game out of six failed in its bid for its first back-to-back wins of the season.

“It’s clear we’re not the same team the second game,” said Canadiens goaltender Jake Allen, who made 28 stops. “We let off the gas a little bit and we’re playing some good teams, and they make you pay pretty quickly.”

It took Washington 15 minutes to open a three-goal lead.

Dowd opened the scoring on a wraparound follow-up of his own rebound.

Carlson made it 2-0 when his one-timer from the point sailed past a screened Allen and off the underside of the crossbar.

Then Montreal helped Washington’s cause when Sgarbossa deflected Cedric Paquette’s clearance attempt toward Allen’s goal and Alexander Romanov mistakenly kicked it into his own net.

Ovechkin’s pass across the crease to Wilson made it 5-2 in the third, and Orlov made it 6-2 before Lehkonen scored late.

“I think it’s all about the situation,” Ovechkin said of his three-assist night. “I’ll take it.” OVI’S UNUSUAL NIGHT

The NHL’s fourth all-time leading goal scorer, Ovechkin has contributed three assists 16 times in his career and achieved the feat for the first time since Feb. 15, 2018.

“I always think there’s that area where you have to make the right decision,” Laviolette said of Ovechkin, who also has 15 goals. “It can’t just be about one thing or the the other thing. He’s done a really good job of that.” 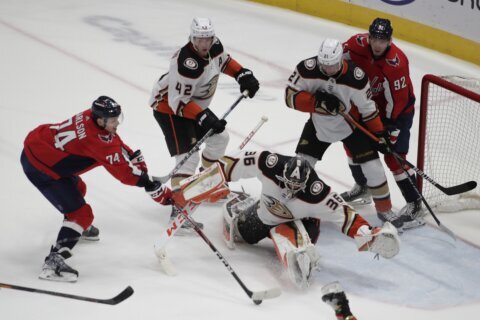 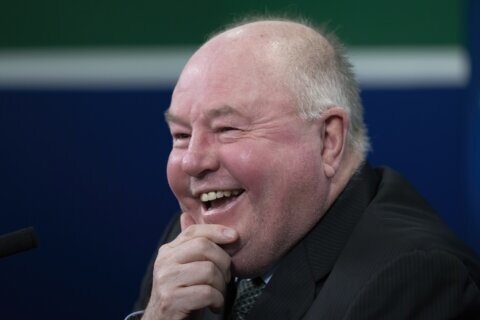 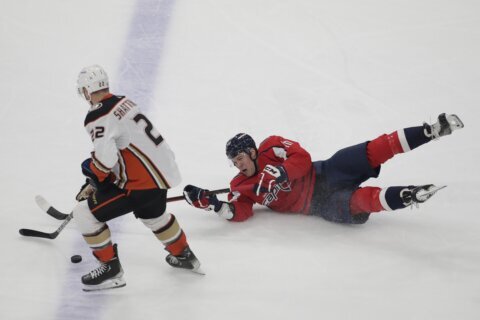