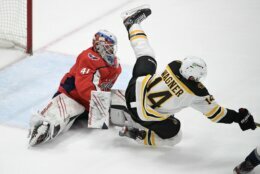 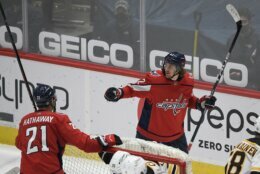 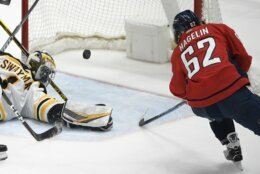 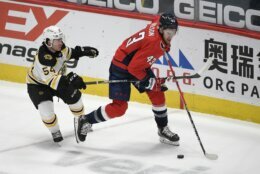 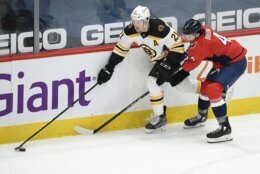 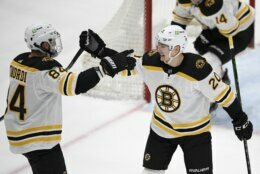 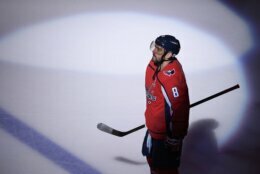 WASHINGTON (AP) — The Washington Capitals got Alex Ovechkin back on the ice feeling “100%” heading into the playoffs. Winning was just a bonus.

Michael Raffl scored from a tight angle with 1.8 seconds remaining, Ovechkin saw his first extended action since April 22 and the Capitals beat the short-handed Boston Bruins 2-1 on Tuesday night in the teams’ regular season finale.

“Right now, I’m 100%,” the Capitals’ all-time leading scorer said. “I didn’t feel any soreness. I feel comfortable. That’s the most important thing. This time of year, you have to be smart and you have to think about the future, not only regular season.”

Ovechkin had previously tried to return from his lower-body injury on May 3 against the New York Rangers, but quickly changed course after 39 seconds of ice time. Despite missing 11 games of the shortened 56-game season, he remains Washington’s leading goal scorer with 24 goals and is fourth in points with 42.

“I tried to play in New York,” he said. “But I didn’t feel comfortable and, obviously, we don’t want to make a risk and that was a smart move.”

Carl Hagelin also scored and Vitek Vanecek stopped 25 shots for Washington in a game between teams who will meet in the first round. The Capitals also welcomed center Nicklas Backstrom back from a lower-body issue that kept him out a game

Curtis Lazar scored for the Bruins, who chose to rest regulars and field largely a reserve squad. That included nine players that entered Tuesday with fewer than 10 games this year and only six with 40 or more. Jeremy Swayman made 30 saves for Boston.

“I thought they played better as the game went a long,” Bruins coach Bruce Cassidy said. “Guys played with a little more conviction, it felt like. We tried to encourage them that, hey, they belong here. This is a good team we’re playing.”

Lazar opened the scoring midway through the second period when he snuck in front of the crease behind defender Tom Wilson and guided in Jarred Tinordi’s cross-ice pass.

Hagelin tied it with 3:45 left to go in the period, putting in a loose puck from in close after Swayman stopped Zdeno Chara’s initial shot.

It remained that way until Raffl collected a loose puck inside the final seconds in the Bruins’ end. From just feet from the goal line left of the goal, he lifted a shot above Swayman’s right shoulder and into the roof of the net.

“Our team was probably not as engaged or as sharp as we should be or normally are, but it was enough to get the win, so you give our guys credit,” Capitals coach Peter Laviolette said. “They battled through.”

The Capitals fourth line of Hagelin, Nic Dowd and Garnet Hathaway all played their 56th game on Thursday, representing three of Washington’s four players to appear in every game this season. The unit combined for 23 goals and 48 points.

Laviolette picked up his 673rd career coaching win, tying him with John Tortorella for 12th all-time in the NHL and pushing him one victory ahead of Mike Keenan.

The Bruins and Capitals begin their playoff series on Saturday night in Washington.