Daniel Sprong scored 1:29 in for his third goal in two games, Vitek Vanecek made 18 saves and the Washington Capitals shut out the New York Islanders 1-0 on Tuesday night to win their first home game with fans this season and sweep a three-game series between the teams.
Listen now to WTOP News WTOP.com | Alexa | Google Home | WTOP App | 103.5 FM
(1/15) 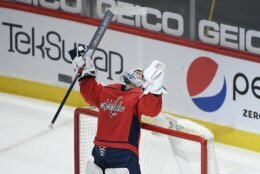 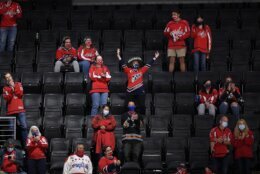 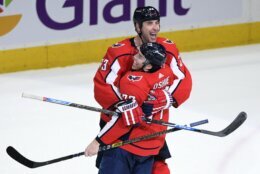 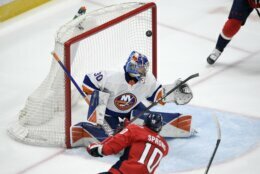 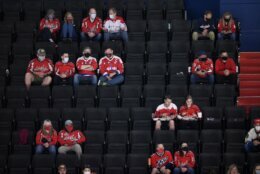 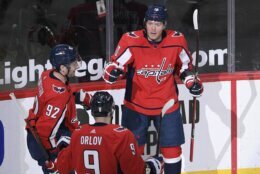 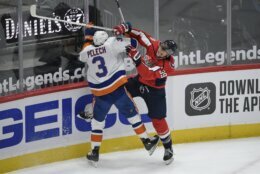 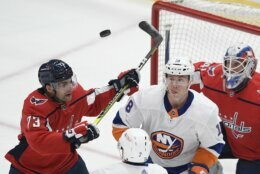 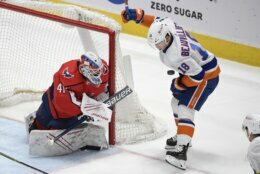 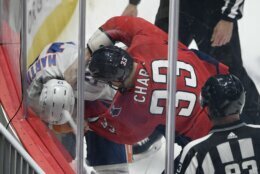 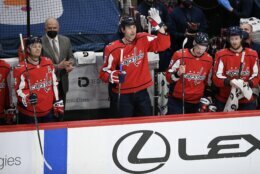 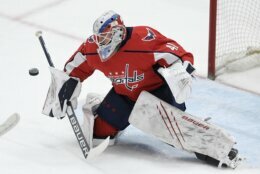 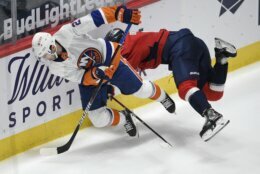 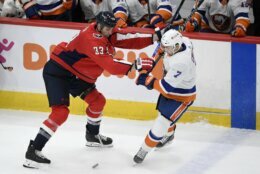 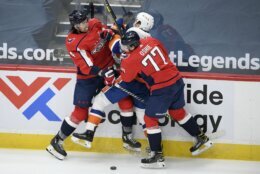 WASHINGTON (AP) — Daniel Sprong didn’t make the crowd wait long for something to cheer about in the first NHL game with fans in Washington in over 400 days, and the Capitals kept the good vibrations going to finish off a mini three-game sweep of the New York Islanders.

Sprong scored 1:29 in for his third goal in two games in place of injured captain Alex Ovechkin, Vitek Vanecek made 18 saves and the Capitals shut out the Islanders 1-0 on Tuesday night to win their first home game with fans since March 4, 2020. It was worth the wait for the 2,133 in attendance who saw their team reclaim first place in the neck-and-neck East Division.

“Even 2,000 fans makes a big difference,” winger Tom Wilson said. “It felt like your first NHL game all over again. There’s no words to describe what it feels like to have the fans back in the rink.”

Sprong continues to make the most of his opportunity to fill in on the top line for Ovechkin, who missed a second consecutive game with a lower-body injury. Despite playing again without Ovechkin and injured defenseman Justin Schultz, the Capitals held the Islanders to 18 shots, the fewest by an opponent this season.

“We was great today on the offense,” Vanecek said after his second NHL shutout. “We was a lot in the O-zone, and that’s where we want to play. You don’t want to play defense. That’s not fun. We want to play offense.”

Offense isn’t coming easy for the Islanders, who didn’t score an even-strength goal in picking up one point out of a possible six in three games against Washington. They were shut out by a rookie goaltender for the second time in six games and third time overall in that span.

“It’s not always going to go your way,” forward Casey Cizikas said. “Right now, it’s difficult. It’s not easy for us, but this is where we grow as a team.”

New York’s rookie goalie, Ilya Sorokin, made his biggest of 32 saves on a breakaway by Anthony Mantha early in the third period to keep the score close. Sorokin got the start after Semyon Varlamov was a surprise scratch with “a little bit of soreness” coach Barry Trotz doesn’t think is a long-term concern.

After Sprong’s 10th goal of the season on the game’s first shot, there were more fists flying and shoves exchanged than quality scoring chances. Washington’s Zdeno Chara took exception to a hit from behind by Matt Martin on new teammate Michael Raffl and fought Martin.

“I don’t have a big issue with Zee’s response to it,” Martin said. “He’s obviously sticking up for his teammate, and I’m fine with it.”

Raffl, who played his first home game since the Capitals acquired him at the trade deadline, hugged Chara when the 6-foot-9 defenseman was released from the penalty box. Coach Peter Laviolette called Chara’s response “awesome” and evidence of why the former Boston captain is such a respected leader.

“That’s just the type of person he is,” Laviolette said. “He didn’t like the hit, and he went right after it. Our guys, everybody, we are all much appreciative that he is able to jump in like that and take care of things.”

FANS BACK IN WASHINGTON

The Capitals were the second-last American NHL team to get some fans back for home games, at 10% capacity. After such a long wait, the “Let’s go Caps!” chants began well before pregame warmups got underway.

“When we was going through the warmups, they was yelling,” Vanecek said. “It’s something different. It’s better hockey. You can stay focusing in the game because they’re yelling, they’re trying to push you. It’s really nice to have them back.”

Only Chicago is left playing in an empty arena among the 24 teams in the U.S., along with all seven in Canada.

Trotz promised “a change or two” to his lineup after consecutive losses to the Capitals and made a few. Josh Bailey earned a promotion to the top line alongside Mathew Barzal and Jordan Eberle, Oliver Wahlstrom replaced Michael Dal Colle among forwards and Braydon Coburn went in for Noah Dobson on defense.

“I’m just trying to try different combinations,” Trotz said. “It’s a little bit of a jigsaw puzzle right now. A Rubik’s Cube would probably be a better analogy to that than a puzzle. But yeah we’re just trying to get a little more production.”

The Capitals went back to Vanecek in net despite Ilya Samsonov stopping 47 of 50 shots in consecutive victories at the Islanders. That’s a calculated move by the coaching staff as it evaluates who might be Washington’s Game 1 playoff starter.

“It’s important that we continue to play both goaltenders,” Laviolette said. “I think the playoffs are probably built for multiple goalies in today’s game.”

Islanders: Visit the Rangers on Thursday in the opener of a home-and-home series between New York rivals.

Capitals: Host the Pittsburgh Penguins on Thursday in the first of two in a row against them in Washington. 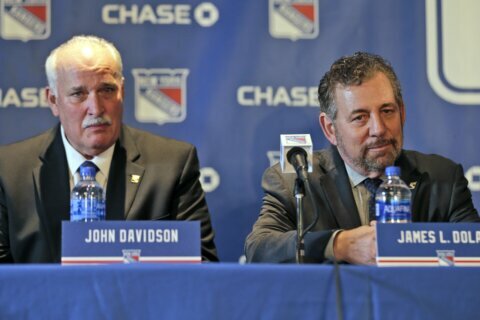 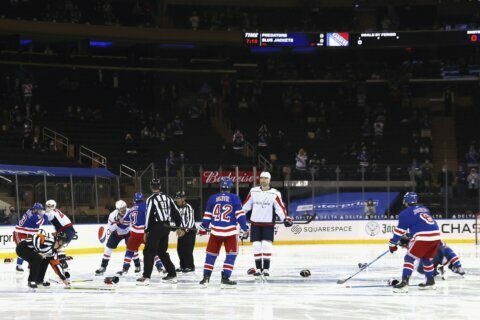 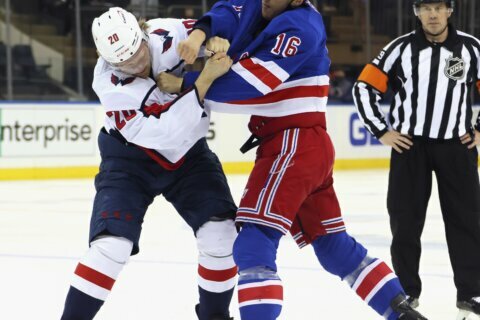