Washington snapped New York’s winning streak at nine and point streak at 12. The Capitals have won six in a row and 10 of 11 to move ahead of the Islanders into first place in the East Division.

Ovechkin is a big reason for that. The captain has goals in four consecutive games and five of six. He is tied with longtime teammate Nicklas Backstrom, who also scored, for the team lead with 12 goals this season.

Goal No. 718 was classic Ovechkin: a one-timer on the power play from his favorite spot just inside the left faceoff circle. It came against former Capitals teammate and countryman Semyon Varlamov. Ovechkin is 13 goals shy of Marcel Dionne for fifth and needs 177 to break Wayne Gretzky’s record.

DALLAS (AP) — Brayden Point had a goal, an assist and the shootout winner, helping Tampa Bay recover from a late meltdown to beat Dallas for a third win in three games this season between last year’s Stanley Cup Final participants.

Andrei Vasilevskiy stopped 24 shots in his ninth straight victory. Mathieu Joseph and Steven Stamkos scored in regulation and Ross Colton also converted in the shootout for the defending champion Lightning, who vaulted from third place to first in the Central Division.

Miro Heiskanen and Jamie Benn each had a goal and an assist, Alexander Radulov also scored in regulation and rookie Jake Oettinger stopped 33 shots for the Stars. Benn and Radulov each scored in the final three minutes with an extra skater on as Dallas forced overtime.

Frederic beat goaltender Casey DeSmith with a wrist shot from the top of the left circle through traffic 7:07 into the third. David Pastrnak scored his 13th on the power play for the Bruins, who had lost nine of their previous 13 games. It was the Bruins’ second win in their last seven road games following a 5-0-1 stretch away from home.

Dan Vladar made 34 saves for his first win in his first NHL start. Vladar made his debut in last summer’s Stanley Cup playoffs when he relieved Jaroslav Halak during Game 3 of the second round against Tampa Bay. Bruins’ No. 1 goaltender Tuukka Rask skated on Tuesday but missed his fifth straight game with an undisclosed injury.

ST. PAUL, Minn. (AP) — Kaapo Kahkonen made 31 saves in his second shutout of the season as Minnesota blanked Arizona.

Minnesota swept three consecutive home games against Arizona and extended its home winning streak to eight, the longest in the NHL this year.

Adin Hill made 23 saves for the Coyotes.

Robby Fabbri broke a tie midway through the second period, sending the rebuilding Red Wings to just their ninth win in 30 games. The Hurricanes entered one point shy of the NHL leaders.

Erne’s two goals in the first lifted Detroit to a 2-1 lead. Fabbri’s go-ahead goal was set up by Dylan Larkin’s drop pass with 7:32 left in the second. Filip Hronek had an empty-net goal in the final minute.

Nino Niederreiter gave the Hurricanes a 1-0 lead 2:21 into the first, and Sebastian Aho tied it at 2 early in the second. James Reimer made 24 saves.

Nazem Kadri had two goals and two assists for the Avalanche, who trailed 4-2 after the first period. They tied it in the second and scored four times in the third.

The Ducks managed only two goals in their previous three games but broke out with a big first period. Adam Henrique led with a goal and two assists. Troy Terry and Danton Heinen also scored, and Derek Grant converted on a penalty shot.

NEWARK, N.J. (AP) — Miles Wood scored the tiebreaking goal on a power play early in the third period and New Jersey beat Buffalo in a matchup of skidding teams.

Yegor Sharangovich and Sami Vatanen also had goals as the Devils ended an 11-game losing streak (0-10-1) on home ice. Mackenzie Blackwood made 33 saves.

Wood redirected Jesper Bratt’s shot from the point at 4:52 of the third for his team-leading ninth goal. 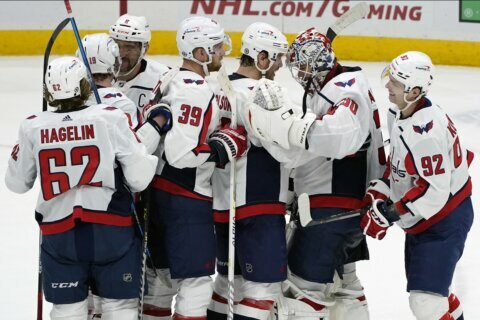 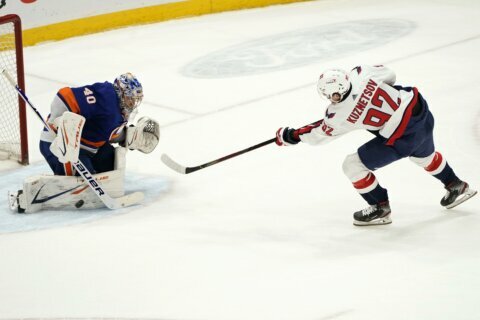 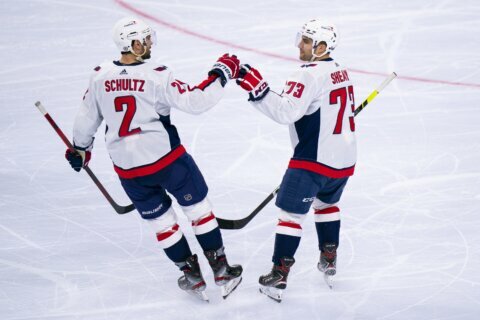