PHILADELPHIA (AP) — The Philadelphia Flyers welcomed fans back to their home arena for the first time in nearly a year, and the Washington Capitals turned the crowd’s eager cheers into disappointing boos.

Alex Ovechkin, Dmitry Orlov and Nick Jensen scored to lead Washington to a 3-1 victory over Philadelphia on Sunday night. T.J. Oshie had two assists and Ilya Samsonov stopped 36 shots for the Capitals, who have won eight of 11.

Washington was without forward Tom Wilson, who served the first game of a seven-game suspension for Friday’s hit on Boston defenseman Brandon Carlo.

Joel Farabee scored for Philadelphia, which lost its second straight and finished 3-3 during a grueling nine-day, six-game stretch.

There were 3,023 fans in attendance, the first time the Flyers have played in front of a home crowd since last March 10. It also was Washington’s first game in front of an audience this season.

“It was great,” Washington’s John Carlson said. “It kind of felt almost weird out there. I like to hear some booing and cheering, the normal things that go on in an NHL game. It’s not a packed house like it shouldn’t be, (but) it means a lot to the players. It’s a lot more natural for us.”

Farabee got the home crowd excited with his team-leading 11th goal to give Philadelphia a 1-0 lead with just under nine minutes left in the first period.

But Washington scored twice in the final 4:49 of the second to take a one-goal advantage into the third. Ovechkin tied it with his eighth of the season, finishing a cross-ice pass from Oshie by going high over Carter Hart.

Orlov put the Capitals ahead with 15.8 ticks left in the period in a similar fashion. Carlson’s pass across the ice found Orlov, whose shot went through Hart’s legs.

Jensen’s first of the season, a hard wrist shot over Hart’s right shoulder, 4:15 into the third gave the Capitals a two-goal advantage and brought on displeasure from the fans.

“No doubt we came out here with the best intentions playing in front of our fans,” Flyers coach Alain Vigneault said. “We came out with good jump, but we couldn’t finish the job.”

The fans had a lot to cheer about early, though.

Farabee opened the scoring when he took the shot himself on a 2-on-1 with James van Riemsdyk, beating Samsonov through the legs. He waved his hands toward the crowd, calling for more noise. And they obliged with loud cheers that sounded closer to a half-full building rather than one at about 15 percent capacity.

“It was awesome,” the Flyers’ Sean Couturier said. “It was pretty loud. It felt great to be back home in front of our fans.”

Flyers fans chanted “Let’s Go Flyers! Let’s Go Flyers!” early in the contest, something you could hear with just an artificial soundtrack up to this point this season. They loudly booed and directed catcalls at the officials after Travis Konecny was whistled for goaltender interference in the first period.

During a stoppage in the second period, they saluted Oskar Lindblom, who returned to the ice this season after battling cancer for much of last season, with a loud ovation

The boos returned with just under 13 minutes left in the third and Philadelphia trailing by a pair of goals, and the home crowd send the Flyers to the dressing room with boos at the conclusion of the contest.

The Flyers spread out fans throughout the building, with yellow signs over chairs indicating where they could sit. Fans were required to wear face coverings unless they were actively eating or drinking.

Van Riemsdyk welcomed them back to the arena with a pregame message posted on the video board.

Wilson’s suspension was his fifth since 2017. He’s eligible to return on March 20 against the Rangers.

There was no penalty called on the play, and Washington coach Peter Laviolette questioned the suspension.

“I certainly think this will open things up to any hit that is forceful and impactful with a player that has the puck,” Laviolette said before the game. “Up until this point, everybody thought hitting somebody square up with the puck was a hit that was in the game.” 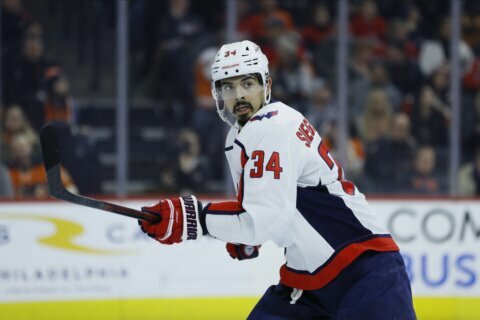 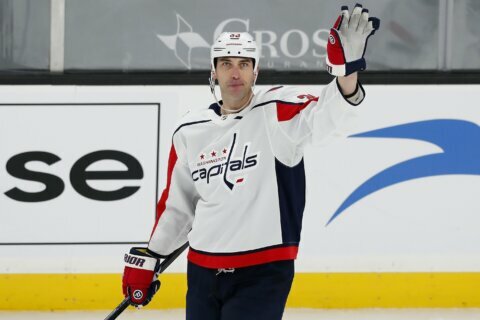