BUFFALO, N.Y. (AP) — T.J. Oshie had a goal and two assists and Washington made a winner of coach Peter Laviolette in his Capitals’ debut, beating the Buffalo Sabres 6-4 on Thursday night.

Jakub Vrana stripped Eric Staal of the puck in front of Buffalo’s net and scored 46 seconds into the third period to preserve the win after the Capitals were in jeopardy of squandering a 4-1 lead. Vrana’s goal came 26 seconds after defenseman Jake McCabe cut Buffalo’s deficit to 4-3 by scoring on a shot from the right point.

John Carlson and Nicklas Backstrom had a goal and assist each and Brenden Dillon also scored for the Capitals. Alex Ovechkin set up the first two goals.

Igor Shesterkin made 29 saves as the Rangers fell in the first of eight games between the rivals. Alexis Lafreniere, the first overall selection of the 2020 NHL draft, made his debut and recorded one shot in 15:27 minutes of ice time.

NEWARK, N.J. (AP) — Brad Marchand had a goal and an assist, then scored the only goal in the shootout as Boston beat New Jersey, spoiling Lindy Ruff’s debut as Devils coach.

Marchand scored a power-play goal and set up another by Nick Ritchie for the Bruins, who won the Presidents’ Trophy for having the best record in the NHL during the 2019-20 regular season. Tuukka Rask made 20 saves, including two on breakaways in overtime, and added two stops in the shootout.

Ryan Ddzingel scored on a power play with 2:34 left and Andrei Svechnikov added an empty-net goal.

Detroit goalie Thomas Greiss made only one save before he gave up a goal, but he stopped 40 shots to give his offensively challenged team a chance for two-plus periods.

The Red Wings, who were easily the NHL’s worst team last season, played for the first time since they lost to Carolina at home on March 10, 2020.

NASHVILLE, Tenn. (AP) — Filip Forsberg scored the tiebreaking goal at 5:48 of the third period to lead Nashville over Columbus.

Luke Kunin and Calle Jarnkrok also scored for the Predators, who have won 11 of their last 14 home openers. Juuse Saros made 29 saves.

Boone Jenner had the goal for Columbus.

WINNIPEG, Manatoba (AP) — Patrik Laine scored his second goal of the game in overtime to give Winnipeg a victory over Calgary in the opener for both teams.

Elias Lindholm, Matthew Tkachuk and Johnny Gaudreau scored for Calgary. Markstrom made 30 saves in his Calgary debut after signing a six-year, $36 million deal in free agency.

The Coyotes trailed 3-1 after Evander Kane’s goal midway through the third period, but scored twice in the final 3:30 to force overtime. Keller scored the first after some nifty stickhandling by Conor Garland and Kessel tied it on a rebound.

Jones stopped the Coyotes on a two-man break in overtime and turned Keller away after Garland hit the post on the previous attempt. Jones had 34 saves in the 2021 opener for both teams.

Tomas Hertl had two goals and an assist for San Jose. Kane added a goal and two assists.

Leon Draisaitl, the NHL’s top scorer last season, had four assists to help the Oilers rebound from a 5-3 loss to the Canucks a night earlier in the opener for both teams.

Mikko Koskinen made 38 saves for the Oilers.

The Golden Knights improved to 9-2-2 against Anaheim since entering the league in 2017.

John Gibson made 24 saves for the Ducks.

The 23-year-old Russian scored on a breakaway, putting the puck past Los Angeles goaltender Jonathan Quick. Kaprizov, who is the third Russian-born player to make his NHL debut with the Wild, also had a pair of assists. 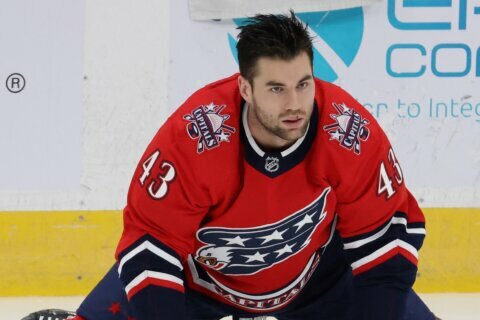 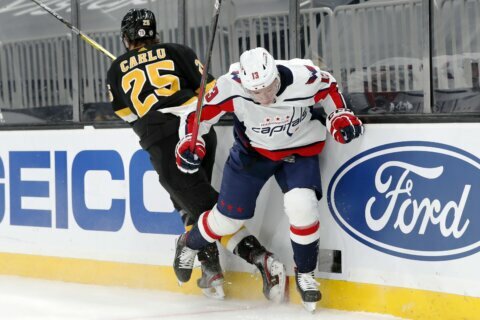