TORONTO (AP) — Mathew Barzal scored 4:28 into overtime, lifting the New York Islanders to a 2-1 win over the Washington Capitals in Game 3 of their Eastern Conference first-round series Sunday.

The Islanders are up 3-0 in the series, putting Washington on the brink of being eliminated in the first round for the second straight year after hoisting the Stanley Cup in 2018.

New York’s Anders Lee broke a scoreless tie late in the first period. Evgeny Kuznetsov pulled the Capitals into a tie with a power-play goal early in the second.

Semyon Varlamov stopped 22 shots for the sixth-seeded Islanders. Braden Holtby had 32 saves for the third-seeded Capitals.

EDMONTON, Alberta (AP) — Dallas scored 16:05 into overtime after Joe Pavelski forced the extra period by completing a hat trick in the final seconds of regulation and the Stars evened their Western Conference playoff series at two games apiece.

John Klingberg’s hard shot grazed Alexander Radulov’s stick and went in to give the Stars the win.

The shot that got past Cam Talbot was the 62nd for the Stars, their most since 63 in a five-overtime loss in the 2003 playoffs. The goal was initially give to Klingberg, but NHL announced the scoring change about three hours after the game.

Pavelski recorded the first playoff hat trick since the Dallas franchise moved from Minnesota in 1993, and the first of his career on his 53rd career postseason goal.

Tobias Rieder tied an NHL record with his third short-handed goal of the playoffs, and Calgary got one in a third straight game against Dallas, for a 4-3 lead early in the third period.

Schenn, circling in the neutral zone, took a stretch pass, raced in and fired a shot high past Vancouver goalie Jacob Markstrom for the defending champion Blues’ first win this postseason.

Elias Pettersson and J.T. Miller scored for the Canucks, and Markstrom finished with 46 saves.

The top-seeded Flyers got another sensational performance from the 22-year-old Hart, who made a slew of big saves and benefited from Montreal shots that clanged off the post.

Hart was stout in the final minute when the Canadiens pulled the goalie and became the youngest Flyers goalie to ever record a shutout at 22 years, 3 days. He had been pulled late in the second period of a Game 2 loss.

Carey Price had 19 saves for Montreal.

EDMONTON, Alberta (AP) — Corey Crawford made 48 saves in a stellar performance, and Chicago avoided a sweep in the first-round playoff series.

Drake Caggiula and Matthew Highmore scored first-period goals for the Blackhawks, and Alex DeBrincat added an empty-netter with 10 seconds left. Chicago handed Robin Lehner his first loss in a Golden Knights uniform since the goaltender was acquired in a trade with the Blackhawks in February.

Vegas suffered its first loss since arriving in Edmonton for the NHL restart. The Golden Knights will have another chance to close out the Blackhawks in Game 5 on Tuesday.

Shea Theodore scored his fourth playoff goal for Vegas in the first period. Lehner had 22 saves.

Crawford, who was in net when Chicago won the Stanley Cup in 2013 and 2015, set a playoff career high for saves in a game that didn’t go to overtime.

Crosby scores in OT to lift Penguins over Capitals 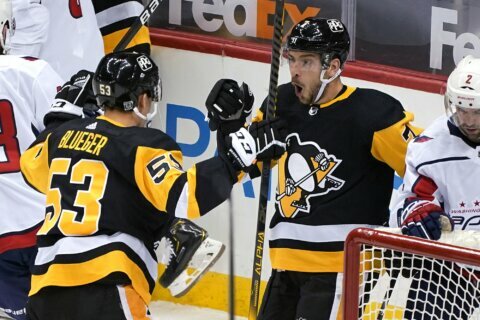 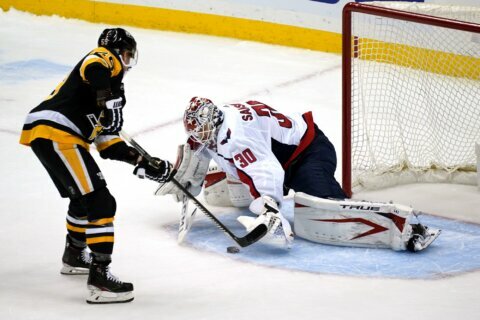