The Nashville Predators showed some promise amid a disappointing season by beating the Washington Capitals 5-4 Wednesday night in a weird game that featured a bad goaltender turnover and a worse own-goal.
Listen now to WTOP News WTOP.com | Alexa | Google Home | WTOP App | 103.5 FM
(1/4) 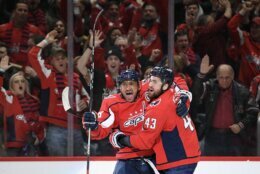 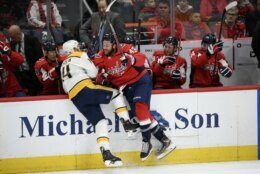 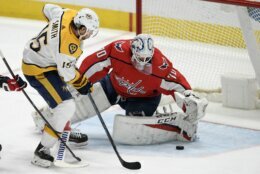 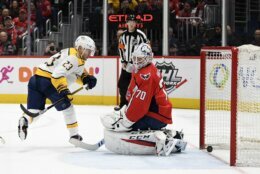 LOS ANGELES (AP) — Steven Stamkos had two goals and an assist, and Eric Cernak scored the tiebreaking goal early in the third period of the Tampa Bay Lightning’s 4-2 victory over the Los Angeles Kings on Wednesday night in the first sporting event at Staples Center since Kobe Bryant’s death.

The arena held a somber pregame ceremony honoring Bryant and the other eight victims of Sunday’s helicopter crash. Bryant’s two retired jersey numbers hang high on the walls of the building, which was the retired Los Angeles Lakers superstar’s home for the final 17 years of his two-decade career.

Both teams played with stickers on their helmets featuring Bryant’s two uniform numbers, No. 8 and No. 24, superimposed on a gold heart along with “Kobe” and “Gigi” for Bryant’s 13-year-old daughter, Gianna, who also perished in the crash. All the Kings’ players showed up to Staples Center wearing Bryant’s jersey, while the Lightning donned purple T-shirts featuring the same logo on the helmet stickers before the game.

After the Lightning rallied from a two-goal deficit in the second period, Cernak got his fourth goal of the season with a long, possibly deflected shot through traffic off passes from Stamkos and NHL MVP Nikita Kucherov, who both extended their scoring streaks to five games.

Tyler Johnson also scored, Andrei Vasilevskiy made 32 saves and Stamkos added an empty-net goal in the final second of the Lightning’s first win in two games after their 10-day break.

Kings defenseman Drew Doughty missed his first game since April 12, 2014, ending the longest consecutive games streak in franchise history. The star blueliner had played in 460 straight games, but an undisclosed injury prevented him from suiting up even after a lengthy break since the Kings’ last game.

Tyler Toffoli and Alex Iafallo scored for Los Angeles. The last-place Kings lost their fifth straight in their return from an 11-day gap between games.

Los Angeles has won one game in January while falling to the bottom of the Western Conference.

WASHINGTON (AP) — The Nashville Predators showed some promise amid a disappointing season by beating Washington in a weird game that featured a bad goaltender turnover and a worse own-goal.

Ryan Johansen tied it after a giveaway by Capitals goalie Braden Holtby, and Yannick Weber scored the go-ahead goal with 4:37 left in the third period. Nashville moved within four points of the final playoff position in the Western Conference and improved to 4-4 under new coach John Hynes, who replaced Peter Laviolette earlier this month.

Predators goalie Juuse Saros made 29 saves to make up for handing the puck to Alex Ovechkin for his 693rd goal and compensating for teammate Nick Bonino shooting the puck off him and into their own net.

Little-used defenseman Jarred Tinordi also scored his first NHL goal in his dad’s old home arena. Former Capitals prospect Filip Forsberg had two assists to give him 15 points in 11 games against the team that drafted and traded him away.

The Capitals had their winning streak snapped at four despite Ovechkin’s 35th of the season and a two-goal game from Richard Panik, who was credited with one when Bonino shot the puck off Saros. Holtby allowed five goals on 24 shots and still has not won back-to-back starts since early December.

Ovechkin continued to climb the NHL’s career goals list after honoring Kobe Bryant by wearing a No. 24 jersey during pregame warmups. Ovechkin went back to his usual No. 8 — Bryant’s other number with the Los Angeles Lakers — and passed Steve Yzerman for sole possession of ninth place in league history.

The Predators have won eight in a row against the Capitals.

DALLAS (AP) — Mitchell Marner set up Toronto’s first two goals and the Maple Leafs kept up their high-scoring ways on the road to beat Dallas.

Marner’s fancy passes to Auston Matthews and Zach Hyman started Toronto on the way to its seventh win in the past eight road games. The Maple Leafs never trailed and set a franchise record with four or more goals in eight straight games away from home.

The Maple Leafs moved closer to playoff position. They pulled even in points (61) with third-place Florida in the Atlantic Division and Carolina for the second wild-card spot in the Eastern Conference but have played more games than either team.

Dallas has lost four of six.

Matthews, Barrie and Johnsson each had a goal and an assist for Toronto.

Arizona’s third line was responsible for its offense. Vinnie Hinostroza and Lawson Crouse each had a goal and an assist, while Nick Schmaltz had two assists. Antti Raanta made 28 saves for the Coyotes, who have dropped their last three.

SAN JOSE, Calif. (AP) — Quinn Hughes had a goal and an assist, Jake Virtanen put Vancouver ahead and the first-place Canucks scored four unanswered goals in the third period to extend their winning streak to four games with a victory over San Jose.

Tyler Myers, Brandon Sutter and Tanner Pearson also scored for the Canucks, who have won six of seven and 13 of 16. Jacob Markstrom made 38 saves.

Tomas Hertl and Brent Burns scored for San Jose, which had won four in a row at home and earned at least one point in five consecutive games at SAP Center.

Andrew Mangiapane had a pair of goals and Elias Lindholm also scored for the Flames.

In the previous meeting between the teams on Jan. 11 in Calgary, Flames forward Matthew Tkachuk delivered a pair of crushing hits on Zack Kassian, prompting the Oilers winger to jump Tkachuk, a move that earned Kassian a two-game suspension that he returned from in this one.

Tkachuk and Kassian squared off for a brief fight during a faceoff late in the first period. 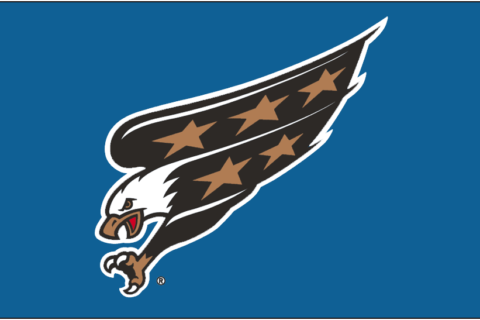 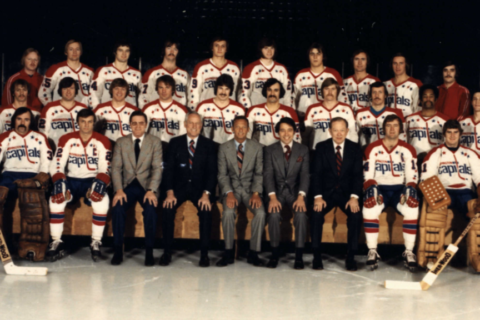