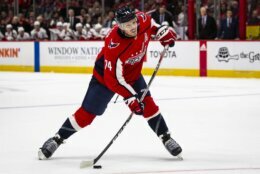 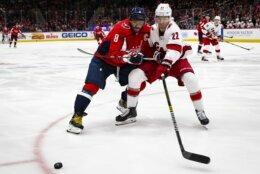 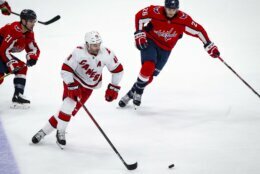 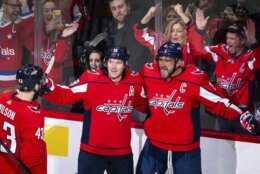 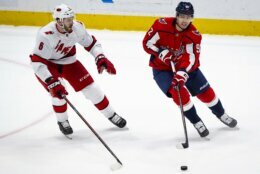 WASHINGTON (AP) — By now, it almost seems like no big deal when Alex Ovechkin reaches another milestone.

Ovechkin scored two first-period goals Monday night and moved into 11th place on the NHL’s career list, leading the Washington Capitals to a 2-0 win over the Carolina Hurricanes.

“I thought tonight was his best game in a while,” Washington coach Todd Reirden said. “He knew tonight was an important game for us so I thought you saw him go to a different level. To me that’s Alex Ovechkin. For our team, knew we needed something extra from our team tonight and I thought he had a standout game.”

Ovechkin was happier with another milestone — the first career shutout for rookie goalie Ilya Samsonov, who stopped 23 shots.

“Sammy did a great job today and kept us in the game with some big saves,” Ovechkin said.

And while Samsonov has played brilliantly, veteran Braden Holtby still plays twice as often as the rookie.

Petr Mrazek made 28 saves for the Hurricanes, but coach Rod Brind’Amour didn’t feel with a two-goal deficit Carolina was going to be able to challenge Washington.

“It was 2-0, but it didn’t feel like we were going to have very much push,” Brind’Amour said. “It felt like we were a little gassed. It might be that time of year where it’s starting to catch up to you. That’s how it felt.”

The first goal was the 685th for Ovechkin, moving him past Selanne. It came at 11:58 of the first period.

“Everything just seems normal with him sometimes, just because he is passing someone and he is always climbing some leader board or what have you,” Capitals defenseman John Carlson said. “Maybe you get dull to it a little bit, but certainly some special names that are close and when you look back at it, I think it will be a lot more meaningful for him as well. But it doesn’t take anything away from him and what he has done and accomplished.”

Washington led after one period for the first time in the last 14 games, but in the second period was outshot 10-5. The Capitals committed three penalties in the period and killed off each one.

“Samsonov was outstanding when he was tested,” Reirden said. “The confidence he’s playing with certainly allows your penalty kill to be a little bit more aggressive because you know if you have a breakdown that he’s going to be rock-solid back there.”

The Capitals had a chance to increase their lead when they had a two-man advantage for 45 seconds in the third period, but couldn’t score.

It was the first shutout of the season for Washington.

NOTES: Carolina forward Justin Williams, signed as a free agent on Jan. 7, did not dress but participated in the morning skate. … Hurricanes D Jacob Slavin played in his 349th consecutive game, tying Eric Staal for the second-longest streak in franchise history. … Capitals forward Tom Wilson played in his 500th career game. He assisted on Ovechkin’s first goal. … Ovechkin has 139 multi-goal games in his career. … Selanne sent a congratulatory video message to Ovechkin that was played on the video board.