Alex Ovechkin took a stick to the face and put three pucks in the net for a hat trick to lead the Washington Capitals past the New Jersey Devils 5-2 on Thursday night.
Listen now to WTOP News WTOP.com | Alexa | Google Home | WTOP App | 103.5 FM
(1/10) 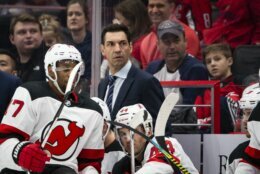 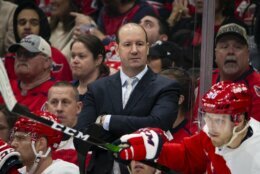 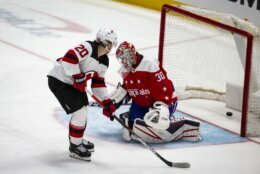 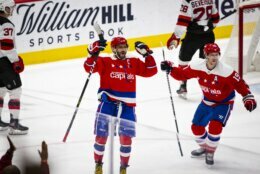 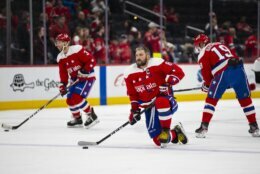 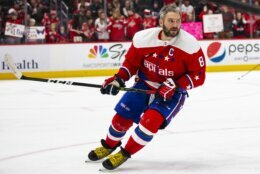 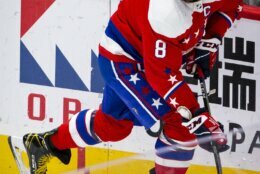 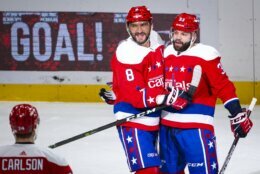 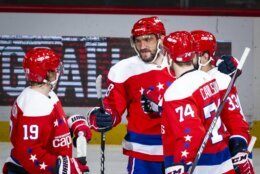 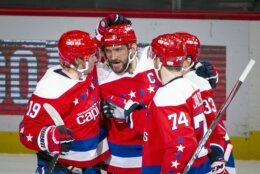 WASHINGTON (AP) — When Alex Ovechkin took an errant stick to the face that made him bleed, his Washington Capitals teammates knew it wouldn’t be good for the New Jersey Devils.

A fired-up Ovechkin came back from the bloody mouth to record his 25th career hat trick and lead the Capitals past the Devils 5-2 on Thursday night. Ovechkin knew New Jersey’s Miles Wood didn’t mean to high-stick him and the referees didn’t see it, but that didn’t stop him from exacting some revenge with his second consecutive multigoal game.

“He always plays better when he’s a little (angry), so there you go,” Capitals center Nicklas Backstrom said. “It was drawn up like that. He came back, got a little mad, scored two and then he was just waiting for the third.

“That’s just the story of Ovi.”

Ovechkin reached 31 goals this season and joined Mike Gartner as the only players to score 30 or more in each of his first 15 NHL seasons. He has five over his past two games to get to 689 total, one back of Mario Lemieux for 10th on the NHL’s all-time list.

Carl Hagelin and Jakub Vrana also scored for Washington, which has won two in a row since a 5-1 drubbing at the hands of the Devils five days earlier. The Capitals looked much more like a first-place team Thursday than they did in these teams’ most recent meeting.

“I think we talked about it a lot going into the Carolina game (Monday) and then followed that up with tonight in terms of playing against the same team that we didn’t like our effort against,” defenseman John Carlson said. “You want to feel good about yourself.”

Ovechkin scored twice on Louis Domingue before the Devils starter exited after the first period with a lower-body injury. The Capitals put up three more on Cory Schneider, who was making his second relief appearance in as many games and stopped 20 of 23 shots.

“Goalies played really well tonight,” Devils interim coach Alain Nasreddine said. “We were timid. We didn’t really get to a lot of pucks first in any area of the ice.”

Washington rookie Ilya Samsonov stopped 32 of the 34 shots he faced to win his ninth consecutive start. Samsonov got the nod over veteran Braden Holtby in back-to-back-games for the first time this season.

Wayne Simmonds’ goal for New Jersey early in the second period snapped Samsonov’s shutout streak at 135 minutes. He had stopped 55 consecutive shots over that time.

One of Ovechkin’s two goals came on the power play, which has now scored in three games in a row to break out of a mini slump. But New Jersey’s Blake Coleman also scored a short-handed goal early in the third period.

The Devils have lost two in a row after getting lit up by the Toronto Maple Leafs and then by Ovechkin, who continues to amaze even his teammates as he approaches 700 goals.

“He is a goal-scorer, probably one of the best in the history, and still got some time to be the best one,” Vrana said. “He’s got an amazing shot and using it and I mean, you guys all know what kind of player he is.”

NOTES: Devils F Kevin Rooney missed the game with an illness. … Simmonds’ goal ended a 27-game drought. … With a secondary assist on Ovechkin’s third goal, Carlson picked up his 45th assist of the season to get to 58 points. … Vrana’s goal was his 21st of the season and Hagelin his second.

Devils: Make their third stop on a four-game road trip Saturday when they visit the Columbus Blue Jackets.

Capitals: Visit the New York Islanders on Saturday afternoon in their final game before their break for the bye week and All-Star Weekend.