Wilson scores in OT to lift Capitals over Panthers 5-4

Tom Wilson scored two goals, including the overtime winner, and the Washington Capitals beat the Florida Panthers 5-4 on Thursday night for their fifth consecutive victory.
(1/8) 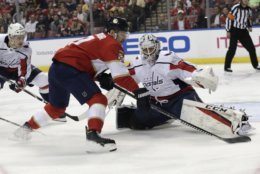 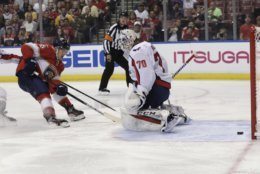 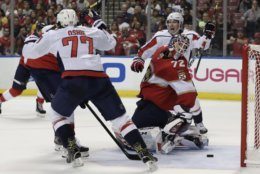 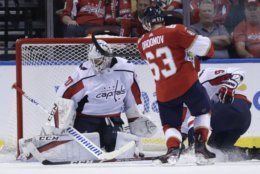 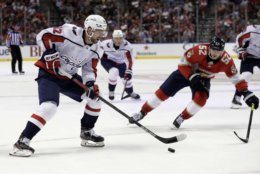 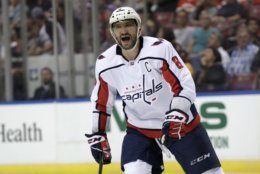 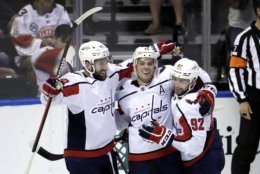 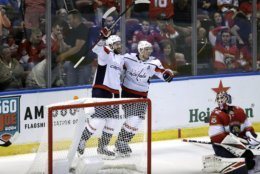 SUNRISE, Fla. (AP) — Playing away from home has been no problem for the Washington Capitals this season.

Tom Wilson scored two goals, including the overtime winner, and the Capitals beat the Florida Panthers 5-4 on Thursday night for their fifth consecutive victory.

After coming back from a two-goal deficit, Washington has won nine of 10 and is 8-1-1 on the road.

“Obviously, the record is outstanding, but evaluating early in the year is difficult,” coach Todd Reirden said. “You look for a response from your team and never quitting until the end.”

Holtby made a pad save on a point-blank shot by Aaron Ekblad before Wilson’s shot beat Bobrovsky 17 seconds into the extra period.

“Holts made an amazing save. When I realized I had to get going the other way, we had a chance. We had an odd-man rush,” Wilson said. “That’s how 3-on-3 works. Your guy comes up big for you and then you can try to capitalize at the other end.”

Aleksander Barkov had a goal and an assist for Florida. Evgenii Dadonov, Brett Connolly and Frank Vatrano also scored, and Bobrovsky made 26 saves.

The Panthers have earned at least one point in 10 of their past 11 games.

“We’ll take points, but when you’ve got a two-goal lead at home, you’re in a really good spot, playing the right way as good as we played against a good hockey team,” Florida coach Joel Quenneville said. “I think we got a little out of our game when we started losing pucks and were trying to do too much.”

Washington tied it at 4 on Wilson’s goal 44 seconds into the third period. Wilson got his stick on a pass from Kuznetsov and flipped the puck past Bobrovsky.

Dadonov broke a 3-all tie on his power-play goal with 61 seconds left in the second. He took a pass from Jonathan Huberdeau in front of the crease and pushed the puck past Holtby.

Florida stretched its lead to 3-1 when Barkov’s one-timer from the high slot beat Holtby 27 seconds into the second.

“We’re disappointed,” Barkov said. “We feel like we could have won this game, but a couple of mistakes, a couple of lucky bounces for them and they won the game.”

The Capitals closed to 3-2 on Ovechkin’s first goal, which came on the power play. Kuznetsov sent a cross-ice pass to a wide-open Ovechkin in the left circle and he fired it in at 6:13 of the second.

“Great move (by Kuznetsov). Fake shot and, to be honest, I didn’t see the puck,” Ovechkin said. “I saw the puck at the last second. It’s a good thing that hit the net.”

Ovechkin’s second goal tied the game at 3 and came with a little help from a Panthers defenseman. Ovechkin’s shot from above the left circle deflected off the stick of MacKenzie Weegar and into the net at 12:14 of the second.

The Capitals made it 1-0 just 25 seconds in on the goal by Carlson, who redirected a pass from Michal Kempny through the legs of Bobrovsky.

Florida quickly tied it when Vatrano got past a defender who slipped on the ice and put the puck between Holtby’s legs.

Connolly made it 2-1 when he scored against his former team. Connolly, who signed a four-year contract with the Panthers on July 1, redirected a shot by Anton Stralman from the point between Holtby’s pads with 5:34 left in the first.

NOTES: It was Ovechkin’s fourth multi-goal game this season and the 136th of his career, seventh-most in NHL history. … Panthers C Colton Sceviour played in his 400th NHL game. … F Dominic Toninato played his first game after being recalled from AHL Springfield. … D Mike Matheson returned after missing five games with a lower-body injury. 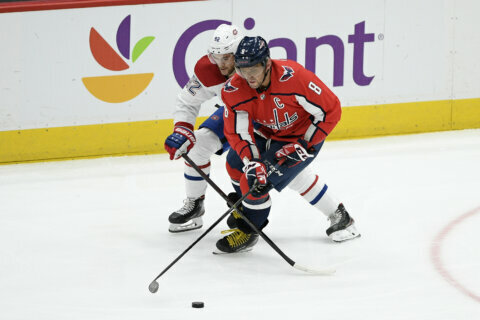 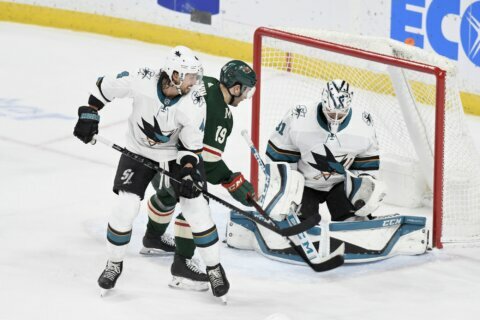