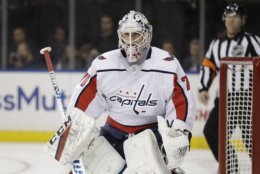 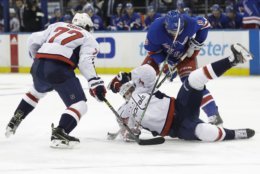 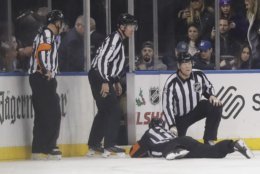 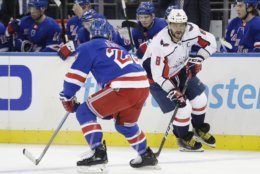 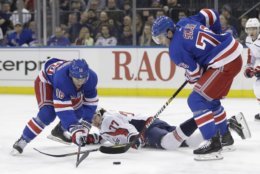 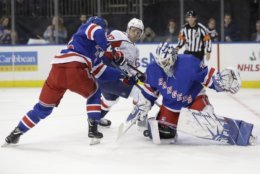 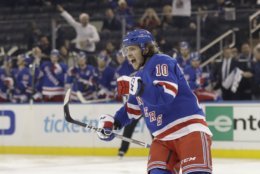 NEW YORK (AP) — The young New York Rangers showed just how well they can do when they play smart and limit mistakes.

“I think that was one of our better efforts as of late,” Lundqvist said. “A big part of their success is their power play, so the key really is to stay out of the box. … Us being disciplined is a huge part of this win.”

Pavel Buchnevich had a goal and an assist, Brett Howden also scored and Kaapo Kakko added two assists for the Rangers, who ended a two-game skid and improved to 6-3-1 in their last 10 games.

“This was a true team effort,” coach David Quinn said. “Hank was really good in the net. I thought we defended well, we didn’t give up a lot of crazy chances, we did some really good things offensively, the power play was good and we had a big kill.”

“It’s an honor to be in that company,” Lundqvist said. “There’s so many really great guys (on the list). A lot of them have been an inspiration to me growing up. … It means a lot to me. It really does.”

Evgeny Kuznetsov scored and Braden Holtby made 27 saves for first-place Washington, which lost in regulation for the second time in four games after an 11-0-2 stretch. The Capitals, who hit iron four times in the first two periods, failed to earn a point for only the fourth time in 24 games, including the second time in 13 on the road.

“We’ve obviously found different ways to win,” coach Todd Rierden said. “Tonight there were some opportunities. We beat the goalie a few times and it’s an inch off from going in the net. Maybe that’s a different game for us when we get rolling a little bit.”

Panarin made it 2-0 with his second power-play goal of the night on a rebound of Kakko’s shot from the left side for his 11th at 3:57 of the third period.

Panarin, signed to a big free-agent deal in the offseason, knows he is being counted on to provide the scoring punch the Rangers lacked since they went into rebuilding mode in February 2018.

“I feel I have more responsibility but I try not to think about it,” he said through a translator. “When you think about it, it just gets in the way. The most important thing is we won and we beat a really good team.”

While Panarin’s goal was being announced, Buchnevich beat Holtby on the right side off a cross-crease pass from Filip Chytil for his third just 23 seconds later.

Kuznetsov scored from the right circle on a power play at 7:24 for his 10th.

Howden beat Holtby on the blocker side from in front for his third with 6 1/2 minutes remaining to restore the Rangers’ three-goal lead.

“They make it 3-1, and then we make it 4-1, and that’s a great sign,” Quinn said. “We’ve all talked about us managing our emotions and managing the ebbs and flows of a hockey game. I thought we did a really good job of that tonight.”

New York’s Brendan Lemieux and Washington’s Tom Wilson fought with 3 1/2 minutes to go, after Wilson ran into Lemieux while he was being hit by Alex Ovechkin near the Capitals’ bench.

Washington pulled Holtby for an extra skater with more than three minutes left but couldn’t score.

With the Rangers still on a power play that carried over from the final minute of the first period, Panarin got a pass from Kakko in the left circle and fired it past Holtby’s glove side at 1:14 of the second. That extended Panarin’s point streak to a career-high 12 games.

After making 10 saves in the first period, Lundqvist had 14 in the second and was helped out by a post for the fourth time when Lars Eller’s shot clanged off iron during Washington’s power play about 7 1/2 minutes into the middle period.

NOTES: Panarin has seven goals and 19 points during his streak. He also has eight goals and 12 points in 14 career games against Washington. … Lundqvist appeared in his 869th regular-season game, breaking a tie with Grant Fuhr for 10th on the NHL’s career list. … Rangers C Mika Zibanejad missed his 10th straight game due to an upper body injury. … The Capitals won the first meeting this season, 5-2 at home on Oct. 18. The teams also play March 5 back at Madison Square Garden and March 26 in Washington. … Referee Furman South was hit in the face by the puck on a clearing attempt by Ovechkin with 9 1/2 minutes left in the first period. South was down on the ice for several minutes and tended to by the Rangers’ medical staff. He stayed in the game and received five stitches during the first intermission.

Capitals: Host the Vancouver Canucks on Saturday to open a three-game homestand.

Rangers: At the Ottawa Senators on Friday night.