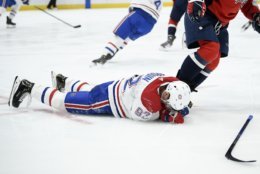 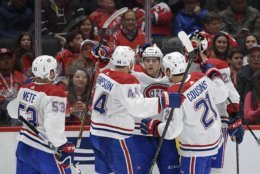 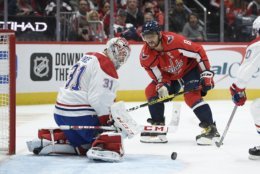 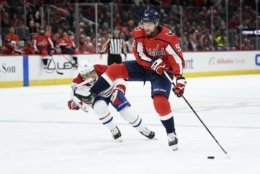 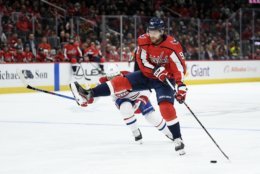 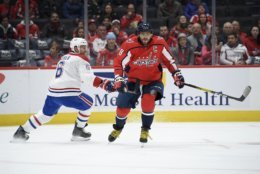 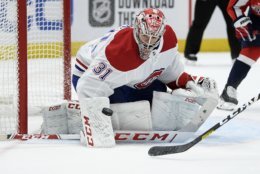 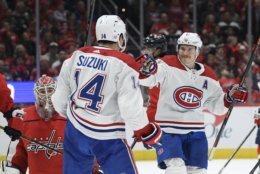 WASHINGTON (AP) — By the time Capitals coach Todd Reirden called a timeout to tell his team to wake up, it was too late.

Montreal scored four goals in the second period following Ovechkin’s hit and went on to beat Washington 5-2 on Friday night, ending the NHL-leading Capitals’ 13-game point streak. Drouin returned for the third period, and the Canadiens won their third in a row.

“I think it just woke us up,” Montreal’s Phillip Danault said. “That was not great, but it definitely woke up the team. Jo took a hit for the team and came back and is healthy, so that’s all that matters.”

Danault, captain Shea Weber, Jordan Weal and Nick Suzuki each scored over a span of eight and a half minutes after Ovechkin flattened Drouin with an open ice hit that knocked him out for the rest of the second. Ovechkin appeared to leave his feet to deliver the blow, and Drouin was slow to get up before skating to the bench and going down the tunnel.

At the time, Ovechkin’s hit was the first big highlight of the night after a ho-hum first period. Montreal coach Claude Julien wondered if it should have been a charging penalty on Ovechkin but acknowledged it wasn’t an illegal check to Drouin’s head.

Ovechkin wasn’t penalized, but the Capitals made a series of errors on the ensuing shifts and the game slipped away.

“I think they just have momentum on their side,” Ovechkin said. “After first goal, they score another one and we just didn’t execute the play, we make lots of mistakes. It was not our best period. We didn’t play our game at all.”

The Canadiens played their textbook style of game in front of Carey Price, who made 25 saves to beat the Capitals for just the eighth time in 27 games against them. Price’s biggest save came a few shifts after Drouin’s injury when he denied Jonas Siegenthaler and was bailed out by defenseman Brett Kulak blocking the rebound, and he made a series of crucial stops in the final minutes.

“He’s our backbone,” Weber said of Price. “He’s a solid reason back there that we have a chance to win every night. Same thing was the case tonight. He makes those big saves in the first and gives us a chance to settle in and get going from there.”

Ovechkin scored on the power play in the third period, his 14th of the season, and Evgeny Kuznetsov added a breakaway goal with 4:22 left to make things interesting.

Capitals goaltender Ilya Samsonov allowed four goals on 39 shots in what was likely his final NHL action before being sent to the American Hockey League for a couple of days to clear salary-cap space. Washington lost in regulation for the first time since Oct. 14 but has dropped two of its past three.

“You know at some point that’s going to happen,” Reirden said. “We weren’t as good as we could be.”

NOTES: Weber extended his point streak to five games. … Ovechkin’s goal was his fourth in seven games in November. … Kuznetsov has four goals in his past four games. … The Capitals dressed 11 forwards and seven defensemen with Nic Dowd injured because salary-cap constraints only allowed them to recall D-man Tyler Lewington. Lewington took a few shifts at right wing. … Washington winger Carl Hagelin missed his fourth game with an upper-body injury. … Montreal forward Jesperi Kotkaniemi missed his seventh consecutive game with a groin injury.

Canadiens: Return home to face the New Jersey Devils on Saturday. Former Devils goaltender Keith Kinkaid could get the nod in net.

Capitals: Turn to Braden Holtby to start Saturday at the Boston Bruins. Holtby is 16-3-0 with a 1.80 goals-against average and .946 save percentage in his career against Boston.