Jakub Vrana scored at 2:51 of overtime to give the Washington Capitals a 3-2 victory over the Stanley Cup champion St. Louis Blues on Wednesday night in the opener for both teams.
Listen now to WTOP News WTOP.com | Alexa | Google Home | WTOP App | 103.5 FM
(1/6) 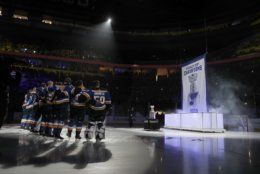 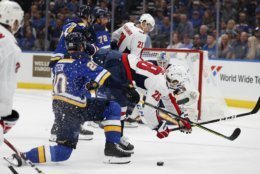 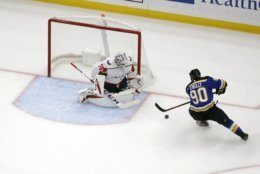 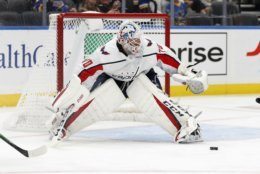 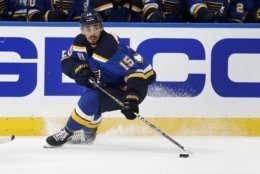 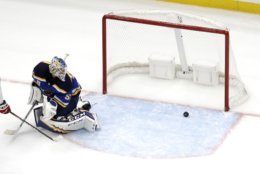 Vrana scored at 2:51 of overtime to give the Washington Capitals a 3-2 victory over the Stanley Cup champion on Wednesday night in the opener for both teams.

Vrana beat Jordan Binnington with a high snap shot to the star corner for his first point in five career games against the Blues. It was just Binnington’s third loss in 17 career home games.

“I just tried to do what I can do best,” Vrana said. “He made some saves, but the last one he didn’t. It was a long shift and we were kind of tired. Once, I got a little speed it was a quick snap shot and it went through him. So, I was happy for that one.”

Alex Ovechkin and Dmitry Orlov also scored for the Capitals. After allowing two goals on the first three shots he faced, Braden Holtby stopped the final 19 he faced.

“It’s obviously not an ideal start to the season but I felt like I played the goals fairly well,” Holtby said. “I just misread little bits of them to execute them. I knew I wasn’t far off and if I just kept pushing that way we were going to play our game and at that point you just try and make the next save to stay in the game as long as you can.”

Sammy Blais and Alex Pietrangelo scored for the Blues, and Binnington made 31 saves.

“To me our whole game tonight, we weren’t aggressive,” Blues coach Craig Berube said. “We didn’t’ play our game. The first period was fine, but after that I felt we got away from our game and just didn’t have that aggressive mindset and didn’t manage the puck well.”

The Blues started their title defense in style with Blais scoring on the first shot of the game just 53 seconds in. David Perron carried the puck below the right circle and feathered a pass between two defenders to setup Blais’ one-timer. Ryan O’Reilly got a secondary assist for his 500th career point.

Pietrangelo made it 2-0 with a power-play goal at 7:55 of the first. Justin Faulk, playing in his first game for the Blues, set up the one-timer.

Ovechkin got the Capitals on the board with 4:23 left in the first. He entered the Blues’ zone, made a nifty move between three defenders and beat Binnington with a wrist shot.

“Of course, you make a couple of mistakes first game but I think our line played solid (and) had lots of chances,” Ovechkin said. “I think every game will be better and better and I think I had pretty good chances to score today.”

Orlov tied it on a power play with 7:32 left in the second. He blasted a slap shot from above the right circle directly off a faceoff.

“You never like to give up a lead let alone a 2-0 lead,” Binnington said. “You just got to keep working and stick to the game plan and have a little more tenacity I guess. I think it will come.”

NOTES: The Blues raised their Stanley Cup banner during a pregame ceremony that featured a video of members of the team celebrating with the cup during the offseason and highlights of the postseason run. Players were announced individually and walked by the cup as they took the ice. Alexander Steen carried the Clarence Campbell trophy, O’Reilly carried the Conn Smythe trophy and Pietrangelo brought the Stanley Cup onto the ice and the Blues players took a lap around the ice with it. The cup was placed on a table and the players locked arms as the banner was displayed for the first time, before ascending to the rafters to Laura Branigan’s “Gloria,” which became the team’s theme song during its run from last in the league in January to Stanley Cup champion. … The Capitals placed G Pheonix Copley on waivers.