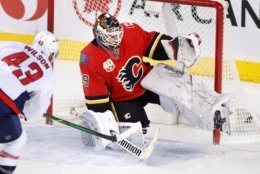 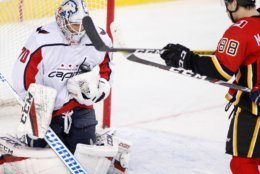 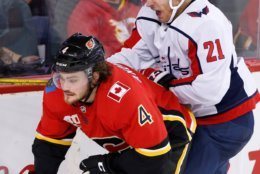 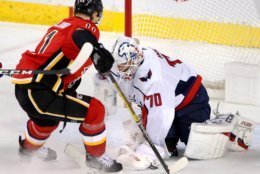 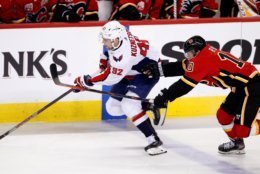 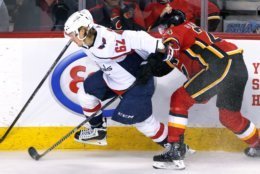 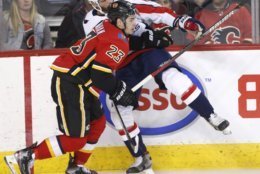 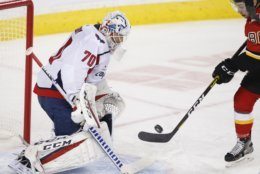 “Johnny for Norris. That’s a hashtag right now,” the Capitals captain said after Carlson’s two goals helped the Washington Capitals to a 5-3 win over the Calgary Flames on Tuesday night.

Carlson scored and added an empty-netter for an NHL-leading 20 points (five goals, 15 assists) in 11 games.

“It’s a great thing obviously. I don’t know what to say,” Carlson said.

He has three games remaining this month to better the high of 25 points in 13 games set by MacInnis when he was with Calgary.

Ovechkin had a goal and an assist and Tom Wilson also scored for Washington. Chandler Stephenson got the credit on an own-goal by the Flames. Braden Holtby finished with 32 saves.

“For good stretches of the game I felt we played well and carried the game, but ultimately it doesn’t matter,” Flames forward Matthew Tkachuk said. “We still didn’t get any points tonight. … They’re a good hockey team, probably the best we’ve played this year. That was a good measuring-stick team.”

Wilson pushed Washington’s lead to 4-2 on a feed from Lars Eller to beat Talbot under his left pad with 7:26 left in the third period. Carlson’s empty-netter with 1:45 remaining maid it a three-goal game before Rieder capped the scoring with 16 seconds to go.

Ten seconds after Czarnik pulled the Flames even at 2-2 in the second, Ovechkin quieted the Saddledome with a go-ahead goal with 3:25 left in the period.

The Capitals’ captain took a backhand pass from Nicklas Backstrom on a 2-on-1 and wired the puck home for his seventh of the season.

Czarnik scored his first by pouncing on a loose puck and sweeping it past Holtby during a goal-mouth scramble for a T.J. Brodie rebound.

Talbot mishandled Carlson’s off-speed shot from the boards for Washington’s first goal of the game 35 seconds into the second period.

Stephenson’s centering pass from behind Calgary’s net deflected off Flames defenseman Rasmus Andersson and in at 2:41 to make it 2-0.

Lindholm halved the deficit with a power-play goal at 3:19, his team-high sixth goal. The Swede wristed a cross-ice feed from Johnny Gaudreau over Holtby’s glove.

Calgary outshot the Caps 15-9 in a scoreless first period.

NOTES: Carlson is five points back of Kevin Hatcher (426) for the third-most points by a Capitals defenseman in franchise history. … Ovechkin is four goals from passing Luc Robitaille (668) for 12th in all-time NHL scoring. … Flames forward Sam Bennett was scratched a second straight game with an undisclosed injury.

Capitals: At Edmonton on Thursday night.