Jakob Vrana scored two goals, including the winner at 4:57 of the third period, in the Washington Capitals' 4-3 victory over the Carolina Hurricanes on Sunday.
Listen now to WTOP News WTOP.com | Alexa | Google Home | WTOP App | 103.5 FM
(1/6) 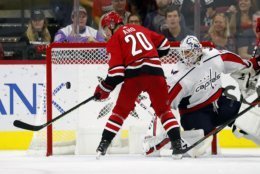 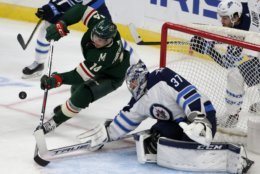 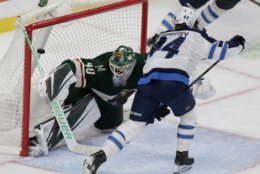 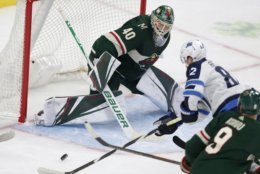 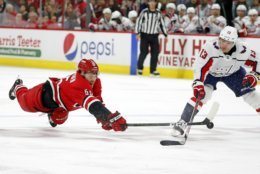 RALEIGH, N.C. (AP) — Jakob Vrana scored two goals, including the winner at 4:57 of the third period, in the Washington Capitals’ 4-3 victory over the Carolina Hurricanes on Sunday.

It was a chippy game throughout, underscored by Washington’s Tom Wilson being assessed a 10-minute misconduct as we all as a minor for unsportsmanlike conduct with 1:17 left in the second period. Following the minor penalty taken against Carolina’s Warren Foegele, Wilson began yelling and gesturing at the Hurricanes’ bench.

Capitals coach Todd Reirden told reporters after the game that a Hurricanes coach yelled at Wilson, inciting the incident. Washington and Carolina met in a seven-game, first-round playoffs series last spring that the Hurricanes won.

Prior to the game, Carolina announced that center Jordan Staal had been named captain, and Jordan Martinook and Jaccob Slavin were selected as alternate captains.

In St. Paul, Minnesota, Josh Morrissey scored at 1:09 of overtime to lift Winnipeg past Jets to a 5-4 win over the Minnesota Wild.

Mathieu Perreault, Adam Lowry, Jack Roslovic and Mason Appleton also scored for Winnipeg. Connor Hellebuyck and Laurent Brossoit split time in net. Hellebuyck started and allowed three goals on 19 shots in the first two periods, and Brossoit made 15 saves on 16 shots in the third and overtime.

At Columbus, Ohio, the scheduled game preseason finale between St. Louis and Columbus was canceled because problems with a charter plane prevented the Blues from traveling.

“We regret the inconvenience the cancellation of today’s game will cause our fans, but after discussions with the Blues there was no viable option that would’ve resulted in our being able to play the game today,” Columbus President Mike Priest said in the statement.

Added St. Louis President of Hockey Operations Doug Armstrong: “Due to an unforeseen mechanical issue with our aircraft, we are unable to travel to Columbus for tonight’s game. We apologize to the Blue Jackets and their fans for this inconvenience.”

In Berlin, Alex Nylander scored the tiebreaking goal midway through the third period and the Chicago Blackhawks beat Eisbaren Berlin 3-1.

Jonathan Toews scored in the first period for Chicago, and David Kampf added an empty-netter. Patrick Kane had two assists.

Sean Backman had the tying goal for Eisbaren late in the second period.

Corey Crawford started in goal for the Blackhawks and stopped all 16 shots he faced in his half of the game. Robin Lehner had 11 saves on 12 shots.

In Las Vegas, Marc-Andre Fleury made 38 saves to lead the Golden Knights to a 5-1 win over the San Jose Sharks in a penalty-filled game.

Denil Yurtaykin had San Jose’s lone goal. Martin Jones gave up four goals on 21 shots in the first two periods, and Aaron Dell had seven saves in the third.

Vegas’ Deryk Engelland and Max Pacioretty were each assessed 12 minutes worth of penalties.