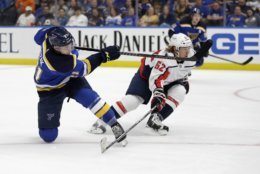 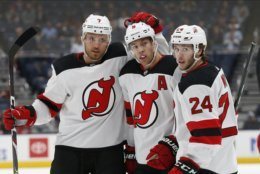 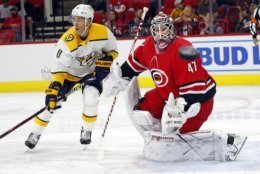 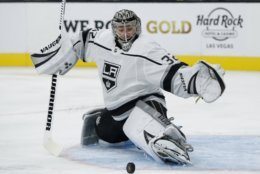 Jaden Schwartz had a goal and added three assists to lead the defending Stanley Cup champion St. Louis Blues to a 4-3 comeback victory over the Washington Capitals on Friday night.

Schwartz scored with 4:23 left in the first to cut Washington’s lead to 2-1.

Brayden Schenn, Vladimir Tarasenko and Tyler Bozak scored in an 11:44 span of the second period, with Bozak’s power play goal at 13:08 the winner. Ville Husso made 24 saves.

At Detroit, Jeremy Bracco scored the only goal in a three-round shootout in Toronto’s victory over Detroit.

After Detroit’s Evgeny Svechnikov opened the shootout with a miss, Bracco fired a snap shot Jonathan Bernier for the deciding goal.

Darren Archibald, Matt Read and Hudson Elynuik scored in regulation for Toronto, which had Michael Hutchinson and Joseph Woll share time in goal. Hutchinson started and allowed two goals on 10 shots over the first two periods. Holl made seven saves in the third and overtime. Svechnikov, Chris Terry and Givani Smith scored for Detroit. Bernier made 34 saves.

Michael Amadio and Alex Iafallo scored for Los Angeles in a 2:20 span midway through the first period, with Iafallo connecting on a power play. Paul Stastny and Brayden McNabb tied it for Vegas with goals in a 1:14 span early in the third. Marc-Andre Fleury stopped 26 shots for the Golden Knights.

Taylor Hall and Travis Zajac scored for the Devils. Hall scored his first goal of the preseason in the first period and assisted on Zajac’s power-play goal in third. Joonas Korpisalo made 25 saves for the Blue Jackets.

Anthony Richard tied it for the Predators early into the third. Juuse Faros made 30 saves for Nashville.

Jordan Staal opened the scoring for Carolina 19 seconds into the second. Carolina’s Petr Mrazek and James Reimer split time in goal, with Mrazek stopping all 19 shots he faced in the first two periods. Reimer played the third and overtime, allowing two goals on 11 shots.