ARLINGTON, Va. (AP) — Connor McMichael in his NHL exhibition debut made a no-look pass to set up a goal that junior coach Dale Hunter knows was no accident.

“He knew that guy had an empty net backdoor,” Hunter said. “You can’t teach that. That’s a feeling of the game.”

McMichael’s feel for the game made him the Washington Capitals’ first-round draft pick in June. Combine that with Evgeny Kunzetsov’s suspension and the door could be wide open for the youngest player in training camp to earn a spot on the opening night roster.

Kuznetsov will miss the first three games of the regular season and the Capitals will need to fill a void in the middle of the ice behind Nicklas Backstrom and Lars Eller. McMichael, just 18, is in the running.

“There’s nothing out of the question,” coach Todd Reirden said. “He made some really good plays in the scrimmage the other day, and he’s got the ability and our scouts speak very highly of him. We just want to put the best players on the ice we can that give us a chance to win.”

McMichael was the 25th overall pick in the draft. Aside from the top picks, very few players go right from the draft to the NHL.

Getting sent back to Hunter’s London Knights of the Ontario Hockey League was always the most likely outcome for McMichael, who is from suburban Toronto. But Capitals brass told him and other centers in camp that a potential suspension of Kuznetsov could change the outlook, and McMichael wants to seize his opportunity.

“You come into camp competing for a spot all the time,” McMichael said. “When another thing opens up, obviously you want to be better, and I’m excited for that opportunity.”

McMichael is competing with established NHL players Travis Boyd and Nic Dowd for the cameo appearance as a top-nine forward. Boyd or Dowd sliding up the lineup in Kuznetsov’s absence would be the safest play for the Capitals, though McMichael has already made his presence known in the competition.

“I liked him a lot (in Sunday’s) inter-squad game, made a couple really good plays,” Reirden said. “For him, it’s about the maturity and whether the right decision is for him to continue to stay here or (keep) going with his junior career and continue to build on what he did last year. All those type of things go into the equation of when to let those guys go back and play or continue to keep them here and an opportunity to stay here.”

McMichael was a point-a-game player last season in juniors and should be a big piece of the Capitals’ future, especially after Backstrom and Alex Ovechkin are gone. With that in mind, this preseason is a mix of long-range planning and a short-term reward.

Hunter, who led the Capitals to the 1998 Stanley Cup Final as their captain and coached them for much of the 2011-12 season, told McMichael to give it his all at camp because no one knows what will happen.

“He’s got to get his body a little stronger, but you can see his potential,” Hunter said Tuesday. “The top end is untapped yet. He’ll get better and better.”

Hunter thinks McMichael will shoot the puck harder as he gets stronger, which will make an already unpredictable release even more difficult to stop. McMichael seems to understand what the Capitals want to see out of him and the elements of his game beyond offense that he needs to improve.

“Obviously I’m one of the young guys here, so they want to see me develop more and just get stronger and harder on the puck,” McMichael said. “They like my game overall, so just keep playing how I’ve been playing and I should be fine.”

McMichael is already impressing older teammates. Forward Chandler Stephenson said McMichael shares some characteristics with Backstrom, who is going into his 12th season.

“He just sees the game and sees plays before they happen,” Stephenson said of McMichael. “It just seems like he has a really good hockey IQ for an 18-year-old. He sees the ice really well.”

McMichael knows he isn’t there yet. He was nervous about his first scrimmage and first exhibition game, and understands it’s a significant leap to pro hockey.

“Just the strength, the speed,” McMichael said. “Everyone’s smarter, they’re quicker. You’ve just got to get used to it.” 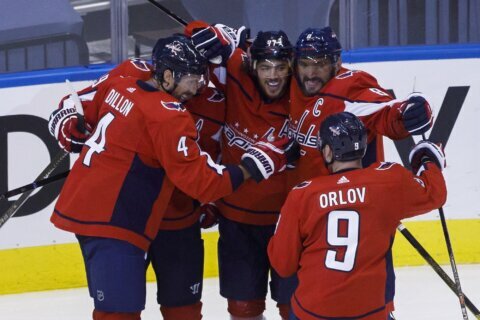 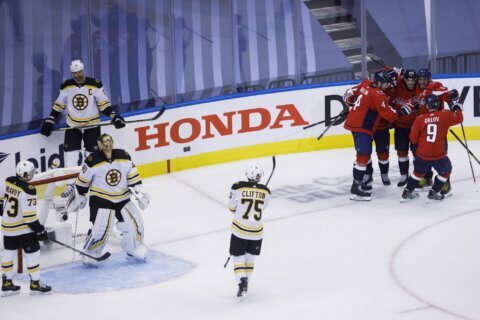