Panarin scored in overtime for the second consecutive game to give the Columbus Blue Jackets a 2-1 victory over the Washington Capitals on Saturday night. Panarin's goal came after Washington lost All-Star goaltender Braden Holtby to an eye injury.
(1/8) Panarin scored in overtime for the second consecutive game to give the Columbus Blue Jackets a 2-1 victory over the Washington Capitals on Saturday night. Panarin’s goal came after Washington lost All-Star goaltender Braden Holtby to an eye injury.

Holtby took a stick to the left eye from Cam Atkinson through his mask in the second period, left the game and did not return. Coach Todd Reirden was “very concerned” and remained uncertain about Holtby’s status afterward.

“He’ll be getting evaluated later tonight still,” Reirden said. “Our initial discussions with our trainer and doctors, that’s a serious thing. He wasn’t able to return to the game, and we’ll get some more evaluation tonight and know a little bit more tomorrow and have a better update for you guys then.”

Panarin’s goal 3:30 into overtime came on the 4-on-3 power play against Washington backup Pheonix Copley, who stopped the first 10 shots he faced in relief to help his team pick up a point. Panarin, known as “Bread” to teammates, also won the Blue Jackets’ game Thursday against Nashville in overtime.

“I loved the way we found a way to get the job done in overtime,” Columbus captain Nick Foligno said. “‘Bread,’ that’s what he brings to this team. It’s a great sign for our confidence right now.”

The Blue Jackets let a regulation victory slip away when Kuznetsov tied the score with 1:06 left. They had led since the one-minute mark of the first period when Cam Atkinson beat Holtby on a breakaway for his team-leading 25th goal of the season.

Columbus goaltender Joonas Korpisalo stopped 32 of the 33 shots he faced in his second consecutive start in place of Sergei Bobrovsky, who backed up after being scratched Thursday for disciplinary reasons. Coach John Tortorella did not commit to starting Bobrovsky in the second half of his team’s back-to-back this weekend.

The Capitals cracked Korpisalo on Kuznetsov’s first goal in 18 games dating to Dec. 2. Then Panarin and his teammates celebrated in Kuznetsov fashion after beating the team that knocked them out of the playoffs in the first round last spring.

“That’s fine,” Kuznetsov said. “It’s nice to get some people that think about me, same as in April last year.”

Washington’s winning streak ended at four games. And the freak injury to Holtby wasn’t the only drama of the night.

The Capitals got a scare when Alex Ovechkin left the game in the first period, but the NHL’s leading goal-scorer came back for the second. Reirden said Ovechkin needed medical attention to close a cut on one of his hands.

Ovechkin was able to finish the game, but the fact Holtby wasn’t is reason for concern moving forward for the Capitals.

“That’s scary,” Copley said. “It is scary to see that, especially as a goalie (because) you’re not really expecting it because you have the full cage on. I just hope for the best that everything is OK.”

NOTES: Holtby stopped 10 of the 11 shots he faced before being injured. … Kevin Stenlund played on the Blue Jackets’ second line in his NHL debut.

Capitals: Host the inconsistent St. Louis Blues on Monday for what should be defenseman Brooks Orpik’s 1,000th career regular-season game. 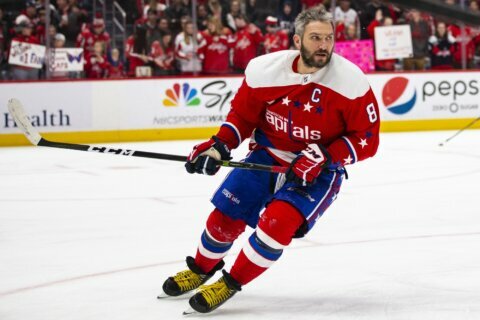