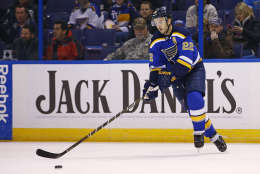 WASHINGTON (AP) — With their championship window in danger of closing, the Washington Capitals made a strong move Monday to try to win the Stanley Cup this spring by acquiring defenseman Kevin Shattenkirk in a trade with the St. Louis Blues.

Shattenkirk is a pending unrestricted free agent, but was considered the top rental player available ahead of the NHL’s Wednesday trade deadline.

The 28-year-old right-handed-shooting defenseman gives the Capitals one of the strongest, deepest blue lines in the league with Shattenkirk, Matt Niskanen, Karl Alzner, John Carlson, Dmitry Orlov, Brooks Orpik, Nate Schmidt and Taylor Chorney. Shattenkirk has 42 points on 11 goals and 31 assists this season and 66 goals and 218 assists in 471 NHL games.

“We felt it was important to acquire another defenseman to strengthen and add depth to our blue line,” Capitals general manager Brian MacLellan said in a statement. “Kevin is a skilled, puck-moving defenseman who we think will help our team at even strength and on the power play.”

The New Rochelle, New York, native counts $4.25 million against the salary cap this season. The Blues retained 39 percent of his salary as part of the trade to make the numbers work under the Capitals’ cap.

Shattenkirk, a power-play specialist who can also eat big minutes, adds depth and offense to Washington’s defense. In addition to the 2017 first-round pick, the Blues get a 2019 second-round pick if the Capitals sign Shattenkirk for next season or reach the Eastern Conference final with him playing at least half of their playoff games.

It’s the fifth trade at this deadline to include conditions based on a team’s playoff success, but this one takes the cake for complexity. The Tampa Bay Lightning could receive as high as a second-round pick or as low as nothing from the deal that sent goaltender Ben Bishop to the Los Angeles Kings.

Giving up future assets is no sweat for the Capitals, who know that with wingers T.J. Oshie and Justin Williams and Alzner set to be unrestricted free agents and other cap constraints that 2017 might be their last best chance to win a Cup. MacLellan said last week the organization tried to create a “sense of urgency” about this season, and that includes his own duties.

“I have to do my job,” MacLellan said. “I have to pursue anything that I think can be a possibility that might make us better, and when we get down into the nitty gritty you say yes or no. And it’s going to be based on what affects it’s going to have on our team.”

Getting Shattenkirk not only strengthens the Capitals but keeps him away from the rival Pittsburgh Penguins and New York Rangers.

Trading Sanford, a 22-year-old rookie with two goals and an assist in 26 games, depletes the Capitals’ forward depth but with time to rectify that before the deadline.

Copley, whom the Blues acquired from the Capitals in the 2015 trade for Oshie, becomes Washington’s third goaltender behind Braden Holtby and Phillip Grubauer. MacLellan said he has been looking for goaltending depth for a while.