Flooding in a remote pocket of southwest Virginia has damaged more than 100 homes and left some 40 people unaccounted for, but there are no confirmed deaths or injuries, authorities said Wednesday.
Listen now to WTOP News WTOP.com | Alexa | Google Home | WTOP App | 103.5 FM
(1/2) 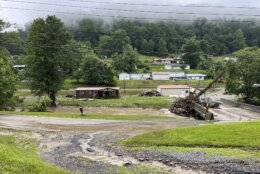 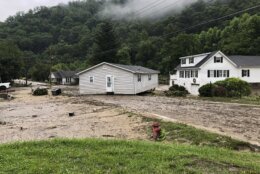 WHITEWOOD, Va. (AP) — Flooding in a remote pocket of southwest Virginia has damaged more than 100 homes and left some 40 people unaccounted for, but there are no confirmed deaths or injuries, authorities said Wednesday.

First responders in Buchanan County began receiving reports of rising water and damage Tuesday night, authorities said at a news conference Wednesday afternoon. After daybreak, crews conducted aerial surveys to examine the extent of the disaster. Several small communities in the Virginia county that borders West Virginia and Kentucky were impacted, according to the sheriff’s office.

About 40 people — a mix of adults and children — were reported unaccounted for, but that number was expected to decrease as swift-water rescue teams continued to survey the area, authorities said. A shelter was established at a local school.

Buchanan County Sheriff’s Office Chief Deputy Eric Breeding said the number of persons unaccounted for is based on relatives trying to contact a resident in an area where there may be limited or no phone service.

“It doesn’t necessarily mean that they are in trouble or in danger. They’re just letting us know that we need to check on these people,” Breeding told reporters.

An official from the Virginia Department of Emergency Management said accessing the remote area was part of the struggle for search-and-rescue teams. Many roadways are blocked by landslides and approaches to bridges are washed out, the official said.

Buchanan County also suffered serious flooding damage last year, when the remnants of a hurricane hit the area in August, washing away homes and leaving one person dead.

This week’s flooding was less severe but more widespread, authorities said at the news conference.

Virginia Gov. Glenn Youngkin declared a state of emergency to aid with the response and recovery efforts.

“As we continue to assess the situation, I want to thank our first responders and the personnel on the ground for providing assistance with our ongoing operations in Buchanan County. While rescue and recovery continues, please join me in prayer as we lift up our fellow Virginians impacted by this tragedy,” Youngkin said in a statement.

Heavy thunderstorms also led to flash flooding Tuesday evening along the Little Pigeon River in eastern Tennessee that prompted the evacuation of more than 400 people from a campground. No injuries were reported in the Tennessee flooding, but vehicles and debris from the Greenbrier Campground were washed downstream by floodwaters, Sevier County Assistant Mayor Perrin Anderson told news outlets.

This story has been updated to correct that the 2021 flooding in Hurley occurred in the month of August.